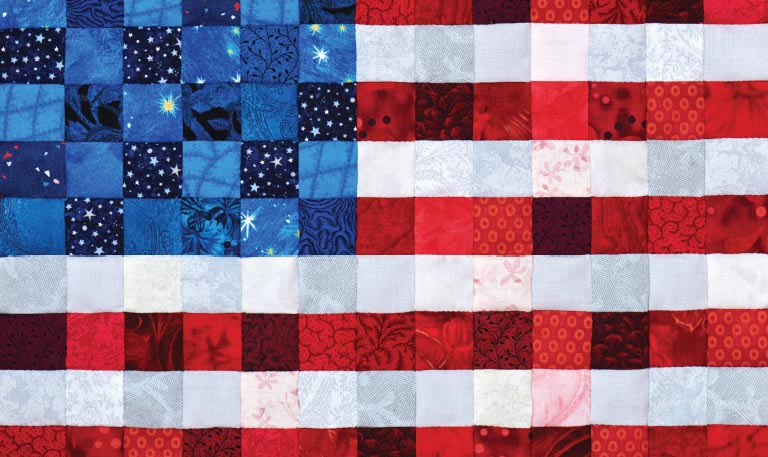 Life is a quilt, lots of pieces, some prettier than others. There are lots of tears that require repair, stains that seem permanent, and always new pieces—as the quilt grows, we grow.

Some of the best “pieces” in our quilt arrive when we step up and become heroes or when we recognize the greater heroism of others. A good way to launch into this year is to do both: Give yourself credit for your own acts of kindness or respect and keep a running list of your heroes from the past year (and this new one) so you will remember them.

It is heroic when you change things for the better. The changes you make, however slight, reverberate through every generation that follows yours. If you try to avoid the abuses of your parents as you raise your own children, it is heroic. When you speak up about abuse in any form—of children, adults, animals, our environment—you are heroic. When you are active in promoting causes that increase our humanity, even if you just pick up litter, you are modeling heroic behavior for the next generation.

My friend Amal and I were chatting about taking good care of our mothers as they aged, not necessarily because we thought they were great mothers, but so our children would have a good model of how to treat us. I sent my mother on a cruise and massaged her feet. Amal encouraged her daughters and their children to call their grandmother thus setting up models for two generations. Self-interest does not negate good deeds.

Kindness is one of the themes in my work, but one can be tough in aid of a good cause. In 1972, Seattle was the first American city to create a rape crisis center. It took tough, passionate women to make this refuge happen (and also good men, when a state law was passed requiring the reporting of sexual abuse of adults and children). That process required big heroes.

Cultures change bit by bit when people model behavior that does not divide but holds a community together. Cultural change is hard; it upsets people’s ideas of what is right, it makes them feel that they are wrong. The old belief that women and children lied about rape and molestation was a huge barrier to believing the victims. Yet, for some there would be guilt and a loss of power if they admitted that they had ignored or attacked women who told the truth.

When cultures begin deep change, tradition releases a poison that generates fear, anger, and a fight between the old and the new. There are so many examples we can laugh at now, but the battles were once steeped in venom. Men should want to fight, women should not vote, Native Americans must be kept on reservations, enslaved African Americans are three-fifths of a person, disabled people should stay home so we don’t have to ramp curbs, gays are unnatural, LGBTQ people need to hide who they are if they want to be safe. Even changing school mascots has led to violence.

As always, despite extraordinary heroics, there are too many examples that are still inherently cruel and deadly. Racism abounds in many forms against immigrants or asylum seekers who are not from Norway. Imagine if you were 18, dark skinned, living in a constant war zone, or starving in a depleted province. You hear there is a better place, somewhere over the hill, where you could work, eat and live in freedom. Would you give up or try to get to the other side? I understand we cannot have chaos. I know it would be better if immigrants’ homelands could change to be safe places to stay. But what would you do, at 18?

Our current atmosphere of hatred and division is a symptom of a powerful cultural shift, a tipping point to viewing our country and the world as a whole instead of separate, guarded parts. It touches a reptilian nerve to encounter such a change, which is why things have become absurd and chaotic. People build bunkers, make weapons, scream nasty names, dress as a tribe, and then attack made-up witches and closet monsters. Every major cultural change in history has brought this behavior, with ludicrous rhetoric bolstering an illusion that forward movement can be stopped with fear-mongering and violent attacks.

In these times—especially now, when the quilt of our culture is being torn by elections—we need more heroes who realize we are not just tearing America apart. We are sewing in new pieces, cleaning what we thought were permanent stains, adding more vibrancy and color, and renewing the amazing quilt that is America. Read the words of Congressman Elijah Cummings, a true American hero who tried to bring us together until his last breath. “I’m going to do what feeds my soul,” he said.

A new year offers a prompt to set a heroic goal. How can you be a bridge between the old ways of being a good citizen and the new ways? How can you help sew up the tears in our beloved quilt so we can all wrap it around ourselves and feel safe? We want to see our country as a beacon, a heroic model for the world. What can you do to restore that? Any small or large gesture will do: a word, a kindness, political activity, a willingness to lead.

I am an American, born in London during the Blitz in World War II. Three hours after birth, I was in a bomb shelter. My infant years were spent in various war care homes as my parents, police officers, stayed in London. When it was over we had nothing. America welcomed us. We worked on a chicken farm outside of Spokane, where I collected eggs as a small girl. American education, a belief in hard work, and perhaps my whiteness brought me to a place I never dreamed of, and I still wonder how I got here. You wrapped me in the American quilt when I was an unknown three-year-old. I am grateful—and I want to see our American quilt wrap others in the same generous spirit of opportunity.