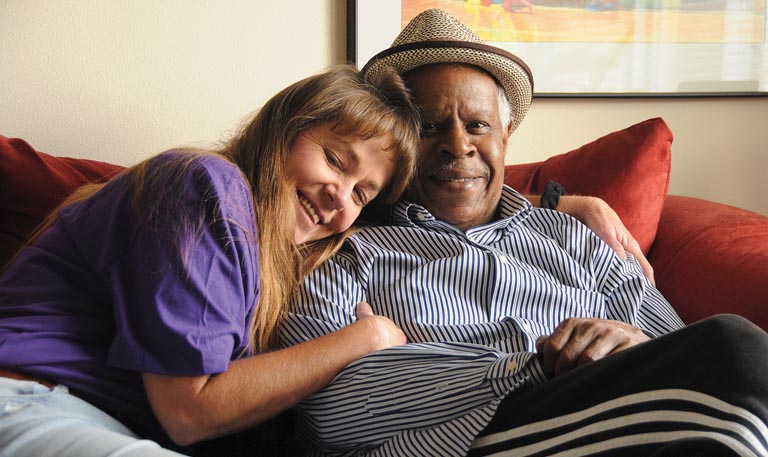 Rod Long has a way of seeing things. Sometimes it’s the play of light spilling through a passageway in the ancient city of Petra. He somehow senses he needs to turn around, and just at that moment, a woman carrying a translucent white umbrella catches the sunlight—and Long’s camera catches her, freezing time, creating both a memory and an indelible image.

Sometimes it’s the play of cascading words, tumbling into stories. A standup comic for 35 years, Long knows when his monologue is working, and he knows when he needs to shift gears. Reading the room, taking its temperature, ready to draw people out but always in a gentle way—until, jackpot, a big laugh.

Long tells stories through his comedy and his photography. Like anyone who’s lived a while, he has plenty of material, yet fate decided he needed some more. In April 2018, just days before his 64th birthday and a few weeks before a long-planned trip to Cuba, Long was diagnosed with pancreatic cancer, the same disease that killed his father.

Fortunately, Long’s fiancée, Kristine Watson, got him to the doctor in time. Long wasn’t in pain, but jaundiced eyes and sallow skin told the couple something was wrong. A CT scan revealed a mass on top of his pancreas, blocking a bile duct. Twelve hours of surgery left Long without parts of several organs, but with a smiley face scar and lots of new stories to tell.

Long insisted on going to Cuba. He knew it was perhaps his last chance, both because of cancer and since the current administration in Washington, DC, is restricting travel to the island. His oncology team at Virginia Mason Medical Center in Seattle jump-started Long’s chemo regimen so he could make the trip. “It didn’t matter that I wasn’t doing that well,” he says. “Once I got there, I was completely energized.” Adds Watson, “He had only had a dose or two of chemo, so he was starting to feel the effects and his hair was starting to fall out. But if you had seen him that day, you’d never known he had cancer. He was his old self.”

Long’s mother was a teacher at Leschi Elementary School and his dad worked at Boeing. Often the only black child in his Catholic school classes, he used humor as a way to put people at ease. When he discovered Richard Pryor as a young adult, “everything just kind of flipped in my head. I realized the huge power of making people laugh.” He started doing stand-up on a dare while working as an editor at Petersen’s PhotoGraphic Magazine in Los Angeles. Eventually, his successes included winning the Seattle International Comedy Competition and the Emerald City’s Funniest Person contest, making two appearances on the Showtime Comedy Club Network, and headlining comedy clubs across the country.

In recent years, Long has frequently entertained on cruise ships, doing stand-up by night and using the ports of call to pursue photography by day. That’s how he met Watson in 2012, when she had taken her son on a Bahamas cruise. “As I sat and people watched, this gorgeous man walked up and sat down beside me,” she recalls. “We started talking and we’ve been together ever since.”

And now, Long is getting laughs from being a cancer survivor. “It’s all part of the new normal,” he says, pointing to his wispy hair. “I have new-normal hair. Now I know what it feels like to be a white man.” And the cancer meds were no fun, giving him bad, bad gas. “I farted the first 30 seconds of Miles Davis’ ‘Kind of Blue’ in perfect pitch last night,” he deadpans.

Of course, as a Seattle sports fan, Long knew suffering before cancer. Describing a robocall, he remembers how the automated voice intoned, “This is Life Alert. At your age, the next fall you take could be your last. Press one to order Life Alert.”

“Now, I’m thinking, wait a minute. I’m in good shape … well, I did fall one time. I fell in a heap in front of my television after Russell Wilson threw that interception against the New England Patriots in the Super Bowl.”

“I said to my oncologist, ‘I’m convinced when he threw that interception, that’s when my cancer started.’ And he goes, ‘Probably about 10 years before that.’ I said, ‘Let’s see, maybe a Mariners game?’”

Long has never been afraid to take chances with his comedy. At a Red Cross benefit shortly after the September 11 terrorist attacks, he said he knew exactly where he’d go if Seattle was under threat: He’d head for the Experience Music Project because Frank Gehry’s building already looked like a plane had hit it. The audience exploded in cathartic laughter.

He’ll still wade into a bit of political humor, like this: “The truth is that we’re a nation of immigrants, and that’s what makes us great. We’re a patchwork quilt and everyone brings a different pattern to the table. If everybody had to go back where they came from, the Native Americans would be standing around in empty casinos saying, ‘Where are all the customers?’”

And yet, Long adds, “There are some places I will never go. I’ll never attempt to make any kind of light of someone who is visibly handicapped and cannot help themselves. I don’t think comedy should be cruel. It can be cutting edge, but when it’s cut to the bone and it’s cruel, I’m sorry. Shock laughs are not real laughs.”

Long loves older audiences because they don’t need to be shocked. “They’ve seen enough things in their life that they’ve already been shocked aplenty. I don’t want to do that,” he says. “I want to make them laugh as I paint funny pictures with words.”

Although Long has already packed a lot of living into 65 years, this Renaissance man could just be getting started. He was invited to address a meeting of the Pancreatic Cancer Action Network in Florida last fall, and he may do more motivational speaking. He teamed with Tacoma filmmaker Randy Sparks to make a feature film, shot over several years before Long’s illness but now making the festival rounds; Long co-wrote Rose Colored Shades and stars in it. And of course, there’s family: He’s the father of four sons from his previous marriage and he’s a grandfather now, too.

Yet comedy will always be there, as will photography, both pursuits that feed his creative soul. “I’ve always said comedy is jazz in English,” Long muses, recalling the times onstage “where I am completely off the sheet music in my head. I’m somewhere else, just off on a riff.” Photography is another way to revel in the moment—and recall it, too. “When I go back to those images and I relive those moments, I’m able to time-travel in a weird kind of way back to where I was when I made that happen,” he says. “In other words, I have somehow cheated time. I can look at something that I captured and I can go back to that moment that I captured it, and that means so much more to me as an artist.”

Julie Fanselow lives in Seattle, writing and editing for clients including 3rd Act and Rick Steves’ Europe. Read more from her at surelyjoy.blogspot.com.