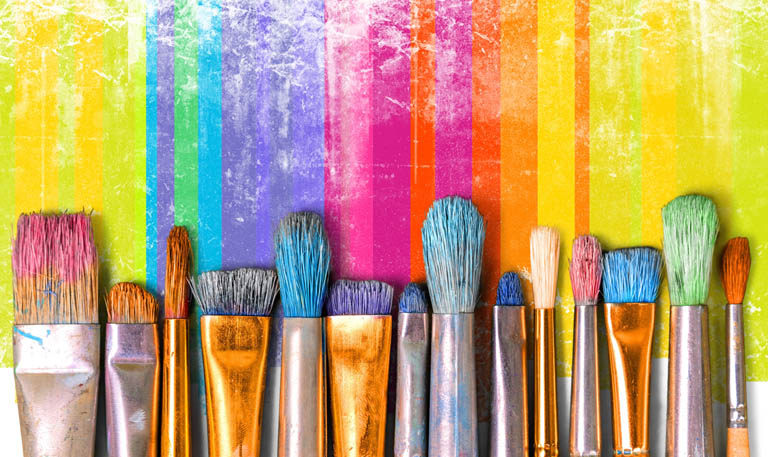 No one who was alive in 2020 will forget how creativity flowered during the pandemic’s early weeks, even as we dwelled in some of the deepest uncertainty any of us will ever face. Families gathered rocks to paint with messages of hope. Opera singers began serenading their neighbors. With so much newly found free time, many of us thought we might learn to draw or write or play an instrument, perhaps via tutorials on YouTube. Music and poetry became sources of solace and solidarity, even when streamed on Zoom.

More than two years later, with COVID-19’s path still unfolding, the arts continue to be a powerful way for us to connect with others, pass the time, and process all that we’ve been through. Here are several stories of how the arts have helped us navigate the unexpected challenges and opportunities of this historic era.

A world of possibility

Jennifer Kulik is the founder of SilverKite Community Arts, a Seattle-based organization with a big portfolio of projects that bring active arts experiences to older adults. In March 2020, SilverKite was in the middle of delivering 29 different intergenerational programs and between 50 and 70 arts workshops per month with senior living communities, community centers, and libraries. “It felt like the bottom completely dropped out,” Kulik recalls.

The pandemic’s arrival came less than a year after Kulik was diagnosed with breast cancer, so she was already primed for a fight. SilverKite was quickly able to begin online programs with libraries, and did more than 400 of those during the first two years of the pandemic. With its partners including local libraries and Sound Generations (previously known as Senior Services), SilverKite has resumed in-person programming at some venues, including the Lake City Community Center in Seattle, where watercolor classes and folk dances have drawn eager participants, even if masks were still required this spring.

One of SilverKite’s most interesting COVID collaborations came to fruition more than a year into the pandemic. Kulik had been a Fulbright scholar in Singapore a decade ago and in 2020, one of her contacts there reached out to ask whether they might collaborate online. With funding from the Seattle Public Library, SilverKite presented an eight-week series of four workshops in summer 2021 with older adults and guest artists in both countries, exploring collage, movement, storytelling, and drama together across a 15-hour time difference and more than 8,000 miles.

Les and Libby Cohen of Seattle had lived in Singapore from 2006 to 2013, when Libby taught at the National Institute of Education and researched an arts high school there. Before a friend alerted the Seattle couple to the SilverKite workshop, they were avid fans of the arts but hadn’t done many hands-on arts activities. Les, a retired engineer, says the experience helped them renew ties to Singapore’s culture they forged while they were abroad.

Gordon Sata heard about the workshops via volunteer work he does with his wife at Kin On, which supports Asian American elders in Seattle. “I’ve never really done anything artistic, so this was a stretch, but I thought it was interesting and I thought meeting people from Singapore would be even more interesting,” says Sata, a Boeing retiree. Sata created a collage depicting how eyes became such a center of focus as everyone masked up to avoid getting or spreading COVID-19.

Because the workshops happened at a low point in the pandemic as the Delta variant emerged, they gave participants an opportunity to enjoy a welcome distraction and make lasting connections. “We’ve developed deep relationships among the group,” adds Libby, noting that everyone stays in touch via a once-monthly Zoom meeting and messaging regularly through WhatsApp. Sata says he and his wife had completely isolated for the first 15 months of the pandemic, “so it was a release and something to look forward to on a weekly basis.”

In some ways, pandemic-induced privacy has made it easier to try new things. Maybe that’s why when King County Library System (KCLS) announced a series of play-along ukulele classes in April 2020, “we opened it up to a hundred people and a hundred people signed up,” recalls organizer Michele McLaughlin, a librarian at the Federal Way branch.

That spring, the branch was supposed to hold the grand opening of a new makerspace stocked with arts and crafts supplies, a 3D printer, and musical instruments including a dozen ukuleles. When the pandemic canceled that idea, McLaughlin says she remembered thinking, “What does this new world look like? How can we still offer programs to the community? What’s possible on this Zoom format that nobody knows yet, but we’re all going to get familiar with?”

One answer was “Wednesdays with Wes” online ukulele classes with local musician Wes Weddell, who had previously taught in-person classes at the library. Once a week in April 2020 and again that fall, participants logged onto Zoom and played along with microphones muted as Weddell taught basic strums and chords for such songs as “Lean on Me” and “Yellow Submarine.”

From the tiny Zoom boxes, it was apparent that a wide range of ages took part—probably most middle aged or older, even though McLaughlin is the teen services librarian at Federal Way. “I’ve been in this building for 24 years and it was such a new thing to think that people were enjoying this program from all over—not just King County, but all over Washington,” she says.

During the pandemic, KCLS has also partnered with the Frye Art Museum, SilverKite, and other organizations to hold a wide range of online programs ranging from poetry writing to paint-and-sip sessions.

Indeed, one of the pandemic’s lasting legacies is how, with geographic and transportation limitations removed, people are now free to learn, play, and create from wherever they are. That has been a boon for everyone from families stuck at home to older folks who no longer drive. But it’s also good to get back to being in person, and when Federal Way holds its annual Make Music Day on June 21, Weddell will lead an ukulele class at the library.

“I’m excited. We’ll get to see Wes in person and touch the instruments together and we’ll figure out how to set the room up in terms of physical distancing,” says McLaughlin. Will people wear masks? Will they be able to sing as well as play? Stay tuned. After all, many of us gleefully unmasked in the summer of 2021, only to see new variants emerge and mask requirements return.

During the pandemic, we’ve learned to expect the unexpected and adapt to changing conditions. Older people had a lot of experience improvising before COVID-19 came along, and we’ve all gotten even more practice over the past two years.

Improv is a specialty of the folks at Taproot Theatre, so it’s no surprise they were ready to adapt to COVID conditions. For more than a decade, the company has offered improv classes for people with early-stage memory loss and their care partners, both at its home stage in Seattle’s Greenwood neighborhood and elsewhere. When the pandemic started, Taproot was quick to pivot to virtual versions of its popular programs. The pandemic may have scuttled the company’s 2020-2021 main stage season, but its “Re-Ignite the Mind” classes have continued without interruption since spring 2020.

Recalling how she and collaborator Rob Martin approached the challenge, Taproot Theatre co-founder Pam Nolte says, “Neither one of us had ever done Zoom before, so at that point we said, ‘Is it worth trying?’” They decided it was and, with a federal paycheck protection grant and other funding, they took the dementia-friendly classes online. “We were amazed how well it worked,” says Nolte, adding how quickly “what was an unknown became an essential.”

Another lesson of the pandemic has been how, for a variety of reasons ranging from cognitive decline to inadequate Internet access, not everyone can take advantage of online experiences. But many people can, and Nolte and Martin have found new ways to help participants play and enjoy social interaction. One game involves passing silly faces to one another, just as they might in an in-person circle; others take advantage of the Zoom “boxes” as boundaries to break through. “We’re able to do that affirmation, we’re able to get that laughter going, we’re able to bring the fun,” Nolte says.

The sessions also include check-ins at the start and end of the class. Many participants and the teachers often arrive less than fully ready to engage, but Nolte says the sessions nearly always prove energizing. This has been especially true for friends, family members, and other care partners for whom the classes offer a new way to relate to their loved ones.

Although Nolte has become a fan of Zoom and believes it will remain part of Taproot’s programming for people who can’t travel, “there is no doubt that when in-person becomes available, it is the go-to, the best way to hold any class,” she says. Taproot hopes to bring its in-person classes back this fall, and other plans include collaborations with the newly opened Memory Hub adjacent to the Frye Art Museum on Seattle’s First Hill, the Gathering Place in Greenwood, and the Southeast Seattle Senior Center.

Nolte says the pandemic has given her an opportunity to ask, “What is it that enhances our lives in difficult times? What are the ways we can reach out? For Rob and myself, being able to come and play, that’s what improv is all about,” says Nolte. “We have to be nimble, but that’s the job of improvisers.”

Out of necessity, the pandemic has also taught us the joy of doing more things outside, whether it’s sharing a meal or enjoying music. Gillian Jones, associate executive director of the Edmonds Center for the Arts (ECA), says that several months into the crisis, when assisted living centers continued to be locked down “and people were dealing with isolation, we asked, ‘What can we do to brighten their days?’”

That was the inspiration for Window to the Arts, a series of pop-up concerts during the summers of 2020 and 2021. Whether people listened through windows or in open-air courtyards, the sweet sounds spread joy to everyone from cooped-up residents to stressed-out care workers. The performances were also a much-needed source of income for some musicians who had lost most of their work due to COVID.

Jones says that at first, “we thought of it as a temporary situation,” yet ECA staff soon realized that “performance doesn’t just have to be on a stage in our theater.” Expanding this idea of outdoor outreach, the Edmonds Center launched a series of concerts in its parking lot last summer that it plans to continue this year.

ECA is slowly returning to in-person indoor events, and its acclaimed dementia-friendly programming will be back this fall, giving people with memory loss and their care partners a chance to enjoy many arts-related activities together.

“One of the takeaways for our team was how important it is to talk with the community,” Jones says. “The relationships we had with the community and local artists really came into play, just being open to find a way we could creatively address problems. I feel like we’ve come out stronger on the other side.”

And that’s a sentiment that resonates for most of us: The pandemic has shown that we are more agile, creative, and resilient than we ever thought we could be. It’s been a tough two years, but that is a good feeling.

Julie Fanselow, a frequent contributor to 3rd Act, lives in Seattle. This article was written with the support of a journalism fellowship from The Gerontological Society of America, The Journalists Network on Generations, and the Silver Century Foundation.

Get Your Arts Groove On

Have a look at these websites for the latest information on in-person and online arts-related opportunities. Many classes and events are free due to generous funding support.