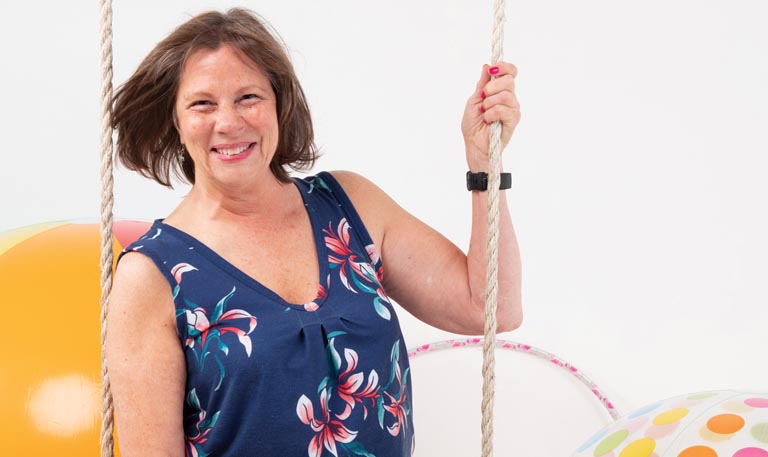 All could benefit from adopting a little of this Seattle native’s playful approach to life and aging.

Two weeks after Dori Gillam’s 65th birthday, she broke her arm and herniated three discs in her neck. For 12 weeks after, when people saw her turquoise neck brace and arm in a sling, they’d ask, “What happened?”

“Cage-fighting,” Gillam would say. They’d chuckle. Then she’d add, “Just kidding. What really happened was I was pole dancing, and the pole broke right out of the ceiling.”

She would watch as amusement turned to flustered confusion. And then she’d say, straight-faced, “You’ve never heard of a 65-year-old pole dancer?”

Finally, she would tell them the truth: “I fell. On the sidewalk.”

Fans of Gillam love this anecdote. “She motivates me to live life a little lighter,” one friend said. “She just knows how to be.”

To which Gillam would say that it all goes back to her mom and dad: Clara and Ralph Wright, who were married for 70 happy years and both lived to be 95.

When times got tough, Ralph and Clara liked to say, “Someday we’ll laugh at this.” And then Ralph would add, without a missing a beat: “So why don’t we start now?” Optimism—it was the secret sauce that flavored her parents’ long and joyful lives.

Gillam says it’s because she is “her father’s daughter” that right after her calamitous sidewalk fall she was “cracking jokes with the EMTs as they were loading me into the aid car.” Later on in the ER, she and her brother were “running George Carlin and Richard Pryor lines, right along with the doctors.”

A few years later, Gillam broke her wrist right before a long-planned seven-day hike on the Inca Trail. She had trained hard, and thought she might be able to do it with her wrist in a cast, but it swelled painfully at high altitude. Instead of flying home, she stayed in Cusco and had “a lovely week chatting with shopkeepers and locals, taking photos with llamas, alpacas, and scores of children, and touring several other ruins, and even a condor rehabilitation center,” all while attending Spanish language immersion classes for four hours a day.

When you grow up with parents who continually create an atmosphere of “this is the way life is and we’re going to have fun, we’re going to make the most of it,” a positive attitude is in the air you breathe.

Ralph and Clara died one month apart in 2008. Gillam was one of their primary caregivers during their last seven years, an experience that profoundly shaped her attitude toward her own aging. In one of Gillam’s favorite photos of her dad, he is roller skating, at 85, at his nephew’s birthday party.

After a year upended by the pandemic, the outcry for social justice following the death of George Floyd, and a fraught election and frightening aftermath, talking to Gillam about how and why she stays positive was like drinking a big smoothie full of vitamins I didn’t know I needed so badly. No, we can’t laugh off a year like the last one, but we can laugh in spite of it. No, we can’t pretend it was easy, or that we liked being isolated from friends and family, but we can point to what we learned—Zoom!—and what we got used to—masks!—and even a few unexpected benefits—who’s had a cold lately? Or the flu? Who’s walking more than they ever did? Or snowshoeing, or bicycling?

Which brings us to Gillam’s signature line, the one that greets you on her website: “How old would you be if you didn’t know how old you are?”

Gillam says a lot of her friends like to tell her, lovingly, that her inner age is set at about 16.
“Not that I’m childish or foolish, but that’s just the way my brain operates, the way I interpret and extrapolate.” She’s fine with 16, even though she sometimes wishes she could be more like her dad, who always said that on the inside, he was forever 25.

The advantage of being a teen inside is that you “don’t have too much trouble playing and seeing how healthy it is to play,” says Gillam. On her post-pandemic wish list is a visit to Montreal, where an installation of adult-sized swings at a bus stop is charming every passerby who tries them out.

She may be a teenager at heart, but Gillam is widely known and loved in the Northwest for her work in the arena of aging. She has worked for Sound Generations, AARP, and Bayview Retirement Community, and writes frequently for 3rd Act Magazine. She is a frequent speaker on a wide range of aging-related topics, from resilience to retirement to end-of-life planning. She facilitates hundreds of “Wisdom Cafes,” first in partnership with the Northwest Center for Creative Aging and later with the King County Library System. The Wisdom Cafes are small-group conversations among older adults, on topics ranging from creative aging to mortality to ageism.

I asked Gillam how older adults can effectively confront ageism in younger people.

“For anyone who already is in your life, start asking them more questions about what it’s like to be 14 or 24. And check your own ageism, because it cuts both ways.” In other words, she says, if we don’t want to hear “OK, Boomer” put-downs, then we’ve got to let go of phrases like “entitled millennials,” because “everyone has gifts of the head, heart, and hands, and if we look for what people can do, instead of what they can’t do, no matter their age, we’ll have a better conversation anyway.”

This ties into another of Gillam’s favorite conversational topics: The legacy that each of us leaves around our own attitudes toward aging. “If you spend your life grumbling about how everything’s changed, if you spend your time talking about how much everything hurts, or what you can’t do, you’re teaching people that this is what aging looks like.” On the other hand, “are you saying, ‘Hey, there’s always something more fun or interesting to learn, there’s always something out there you can grab hold of.’ And that’s part of resilience, too, which of course I’ve learned from my parents.”

For Gillam, her own attitude adjustment habits include an hour of comedy per day—30 minutes in the morning and 30 minutes in the evening. Anything goes, from YouTube videos of the Marx Brothers, Carol Burnett, and Trevor Noah to funny pet photos on Instagram.

Pre-pandemic, she was a frequent volunteer for Habitat for Humanity, building homes in Zambia, India, China, and Central America. And she looks forward to more Habitat builds because, as she wrote in a 2017 3rd Act article about volunteer vacations, “volunteering to help someone—or further a cause—while traveling is a refreshingly addictive combination. When you help someone while learning something new, you are energized.”

Which takes us back to the importance of play, because some people might not think breaking bricks or bending rebar is what you’d call “play.”

“I love it when people find their third acts, or fourth acts, or fifth acts, because that’s part of what keeps us having fun—and I won’t say keeps us young, because we’re all still aging—but it keeps us vital and interested.”

Like Dori Gillam. Who, by the way, was the winner of Sound Generations’ 2020 Lifelong Learning Award. Congratulations, Dori. Keep on learning, because we’re learning from you.