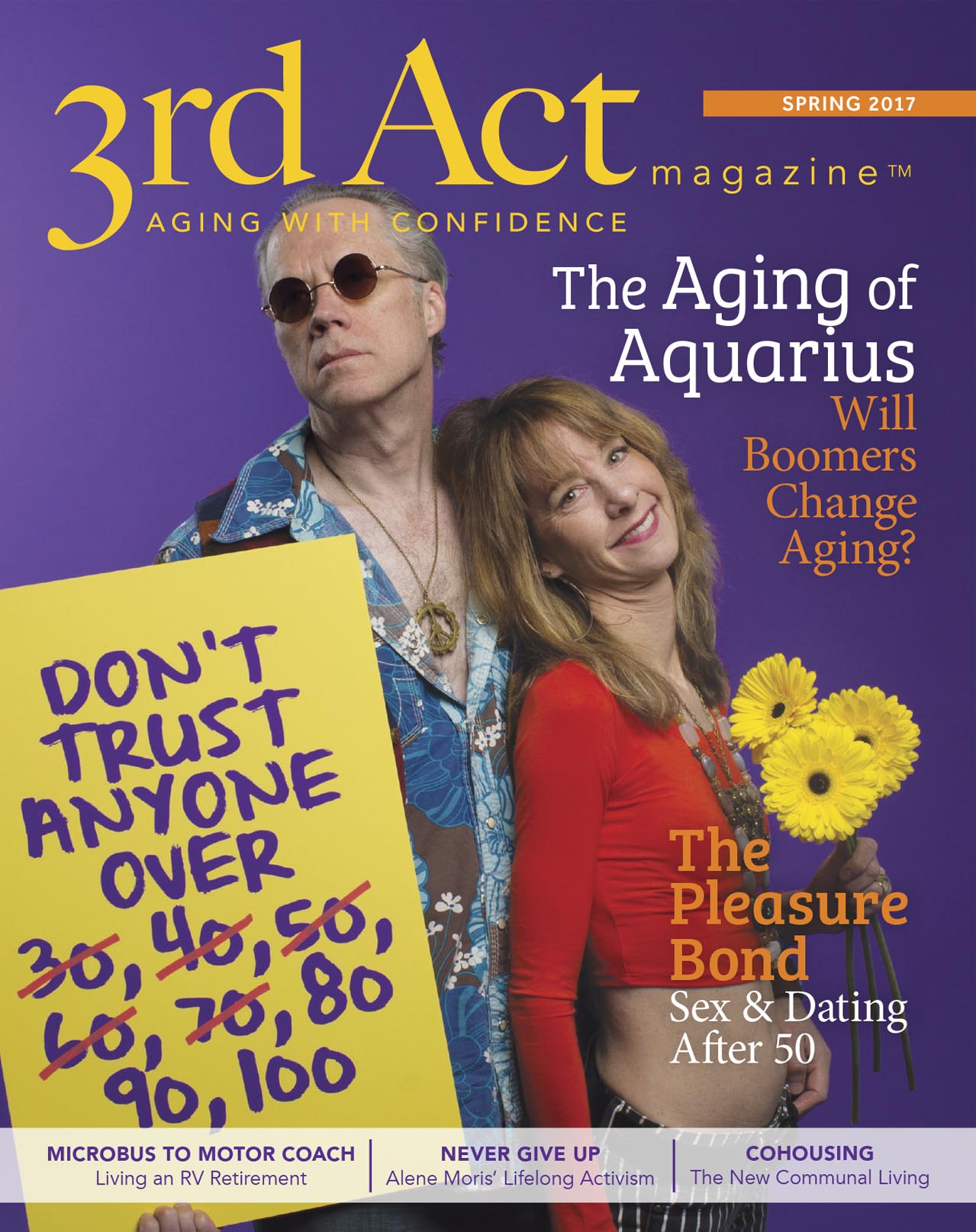 He’s an actor and teacher. She’s the host of the TV show Art Zone. They’re both well-known presences in the Northwest’s cultural scene.

Like everyone, Joe and Nancy Guppy are getting older, but they’re doing it more publicly than many of us. As artists, comedians, and writers, they have freedom to create their own script about aging, just as they’ve shaped highly creative careers, with wisdom, wit and an improvisational flair.

One of improv’s core principles is saying, “Yes, and” to what your partner offers. The Guppys have shaped their careers by saying, “Yes!” to opportunities. They said, “Yes!” to working with Almost Live, Seattle’s comedic answer to Saturday Night Live. They said “Yes!” to moving to L.A. to become television comedy writers. And they said “Yes!” yet again to returning to Seattle, Nancy to rejoin Almost Live (and then to Art Zone), and Joe to a career as a psychotherapist, tutor/mentor, and improviser.

Joe is 62 and Nancy is 56, so they’re younger members of the Boomer generation. But as entertainers, they have a deep understanding of what it means to age in the spotlight.

Joe is still practicing improv (as you’ll see in his “My 3rd Act” column accompanying this story). He’s one of the few older company members in Unexpected Productions, where he also teaches. Joe explains that improv theatre, as a relatively young field, doesn’t have many older players. But instead of saying, “I’m too old, I’ve got to step aside,” Joe’s been curious about “what it’s like to have older people on stage with the young people.” The result has been a stronger company.

As host of the City of Seattle Channel’s TV show Art Zone, Nancy pours her abundant energy and curiosity into highlighting regional art events and artists. For example, she shares her fetching laugh and comedic timing while interviewing arrivals at opening night of the Seattle International Film Festival. And those few wrinkles? She knows they hardly matter when you’re the celebrated host of your own show.

Still, they’re not escaping some challenges of aging. Recent experiences with back pain were sobering. As Nancy says, “If this is the way it is, forget it! I don’t want a lot of pain!”

The Guppys are also learning about aging through their experiences with Joe’s mother, who recently died, and Nancy’s parents. Joe reminisces about visiting his mother in her assisted living facility. “When I saw my Mom, I had all this pain because she used to be so sharp. I saw this continuously diminishing shadow of a really sharp, powerful person and I was overwhelmed by that loss. But I was missing something. I wasn’t seeing who she was in the here and now.”

He recounts, “I remember a tremendous moment with my Mom before she died. I watched a caregiver come up and give her a huge smile and a kiss on the cheek. Through her eyes my Mom was like a beautiful child.” Joe had been focused on what his mother had lost, but the caregiver saw who was still there.

Nancy adds, “To have a bigger imagination and acceptance of aging, you have to be around older people. You have to familiarize yourself—so they’re not ‘the other’ or you’re not thinking, ‘that’s not and cannot and will not be me.’ You have to be close so that the fears and stereotypes can melt away.”

When it comes to senior moments, improv imparts another lesson. Joe shares how one of his company members slipped and invented the word “barbelling” in a performance. No problem. The whole group on stage just took up the word. Joe says, “Improv is a lot about getting the wrong word anyway!”

Nancy says, “You have to remain curious. Not that it’s a bad thing to bring your old experiences into new experiences, but you have to be open minded to look the fool, fail, and be willing to look wrong. Because if you don’t, you tighten up and start battening down the hatches.”

Looking to the future, the Guppys are excited, curious, and ready to keep learning—even if exactly how that happens remains to be seen. But as Nancy reminds us, “Life is one, big, fat improv.”

Sally Fox is a coach, consultant, speaker, and podcaster who is helping individuals and organizations to bring their best stories forward. She lives on Vashon Island with her horse, husband, and the inimitable Barry-the-cat. Read about her work and find her blog at engagingpresence.com.  You can also listen to her podcasts at 3rdActMagazine.com.