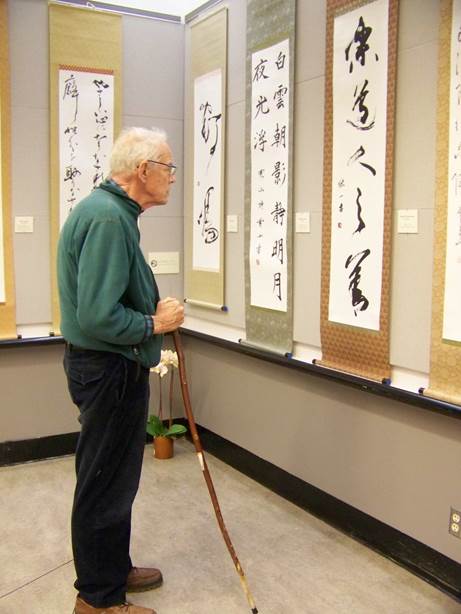 The signature piece of a recent Seattle exhibition of Japanese calligraphy was a transcription of a well-known poem, Thunderbolt, the text of which is quoted above. The scroll is a stunning piece of artistic writing in which master calligrapher Yoshiyasu Fujii beautifully inscribes the characters for the words. Within the vertical formality of the text, the artist dramatically stretches the limits of this highly controlled discipline. He does so by enlarging the first character that for thunderbolt, and snapping his brush on the paper to create the powerful burst of ink to represent the sound and force of the storm. The work consists of the simplest of elements, black ink on white paper. Yet it is a microcosm of all poetry, in that it epitomizes the practice of freedom within boundaries, tradition in league with imagination.

Makiko Doi, a Mirabella resident, has been studying and practicing calligraphy for twenty years under the instruction of master calligrapher Yoshiyasu Fujii. Among the several hundred works on display were three of Makikos own. An especially beautiful one is based on a haiku by Kobayashi Issa, In the end, hydrangeas, all in one color, and features the graceful images of three pale blue hydrangea blossoms.

Another of Makikos pieces with strong personal significance is her transcription of the opening verse of the great Japanese epic poem, Tale of the Heike. The poem, in twelve parts, tells the story of the twelfth-century struggle between two warring clans for control of Japan. The first verse announces two central themes that have their origin in Buddhist thought: the law of impermanence and the inevitability that the mighty will fall.

The sound of the Gion Shoja bells echoes the impermanence of all things; the color of the sjla flowers reveals the truth that the prosperous must decline. The proud do not endure, they are like a dream on a spring night; the mighty fall at last, they are as dust before the wind.

Makiko explained that the epic, especially its opening verse, carries great meaning for her because of her experiences in Japan up to the age of twenty, and since then in the United States. Makiko preceded her twin sister, Chizuko, at birth but was regarded as the younger by her family. In accordance with Japanese custom, as the youngest of seven siblings, she was taught to defer to all of her elders, including her twin. She and her sister attended school, where Chizuko was given lessons in calligraphy and its long history in China and Japan, while Makiko was taught painting. This decision was made by her elders to put them on different paths, so they would not be competing against one another.

But in 1941, when war began, all was changed. Family members were separated from one another as brothers were called up for military duty, and instruction in schools ceased for the duration of the war. To compensate for this loss, her father hired an English teacher who, though banned from teaching English in Japan, taught math and other subjects to Makiko and her siblings. His teaching and his mentorship after the war prepared her for entrance exams at the private Notre Dame Seishin Womens College (now Notre Dame Seishin University) in Okayama, run by the American Sisters of Notre Dame. Here, the occupation forces regularly supplied nourishing food, a significant advantage to families in a starving and war-impoverished country. In her three years at the college she learned to read and speak English, and studied English culture and western ideas. Years later, Makiko realized the extent to which these self-defining events led to the loss of an education in her own Japanese culture, its history, and its language.

Upon graduating from Seishin Womens College, with her bilingual skills and a wish to emulate her admired English teachers, she earned a scholarship to the University of the Pacific in Stockton, California. Here she began her undergraduate studies in the United States. On one occasion, she was asked by an American classmate and friend what she regarded as the worst sin she could commit. After some thought she replied, Failing to obey my family. Her friend, when asked to answer the same question, replied without pause, Not fully making use of my own faculties. Makiko thinks of this moment as an important epiphany: she recalls thinking to herself, I have really come to a very different world. In her family, in her native country, no young girl would conceive of acting independently from her family.

She completed her degree in English literature at the University of the Pacific, where she met her future husband, Richard Doi. After they married, Makiko earned her Master of Library Science degree at the University of Washington. Subsequently, she worked as a cataloger in the Hoover Institution of War, Peace, and Revolution at Stanford, in the Asian Language Library at Columbia University (where her husband studied for his doctorate in fine arts), and in the library of Southern Oregon University. In 1965 they moved to Ellensburg, Washington, where Dr. Doi taught art at Central Washington University.

With a young family to care fora boy of nine months and a six-year-old girl Makiko did not return to library work until 1974, when she joined CWUs James E. Brooks Library. She began as a serials librarian, quickly rising to the rank of professor of library science before retiring in 1993. She was often called upon during her tenure at CWU to act as an interpreter for visiting scholars and scientists from Japan. She recalls the occasion when she was asked to assist a Japanese mycologist, Professor Hiroyuki Ohara from Kyoto. Governor Dixie Ray invited Professor Ohara to determine the feasibility of growing and harvesting matsutake mushrooms (pine mushrooms, so named for their natural habitat in Japan) for export to Japan, where they are very expensive and in high demand. With an airplane and pilot provided by Governor Ray, Makiko and the scientist visited various forest regions thought suitable for this unusual crop. After careful inspection of these remote areas, Professor Ohara realized that a viable mushroom-growing industry would seriously damage the delicately balanced ecology of the identified sites in state forests. She ultimately recommended that the project be abandoned. On another occasion Makiko helped the Anderson Hay Company of the Kittitas Valley arrange hay exports to Japanese agricultural suppliers, an enterprise that has since become a multimillion-dollar industry for central Washington farmers.

Through her bicultural and bilingual abilities, Makiko made a great many contributions to public service. Most notable among these, and perhaps the most permanent and visible, is the establishment of the Japanese Garden on the campus of Central Washington University. As liaison between the University and the Osaka Exhibition Foundation of Japan, she played an important part in the creation of this green oasis in the midst of near desert-like surroundings in the Ellensburg area. To mark her service to the community she received a Distinguished Professor Award from the University in 1991.

After her retirement, her second career, as she calls it, brought her back to her beginnings. This being, her desire as a young child to absorb the rich and complex history of Chinese and Japanese calligraphy, and the cultural treasures it inscribes. And mention of her long-held desire brings us back to the beginning of this story. She met master calligrapher Yoshiyasu Fujii in Ellensburg when he came to present a calligraphy demonstration on campus. On moving to Seattle in 1993, Makiko began studies with him, continuing since then as student and practitioner. Over the last several years her work has been accepted for exhibition at competitions and galleries in Japan. The winner of many awards for her work, she has reached the standing of master calligrapher, becoming the first Japanese person living outside of the country to be promoted to full professor by the Genwa School of Calligraphy in Saitama, Japan.