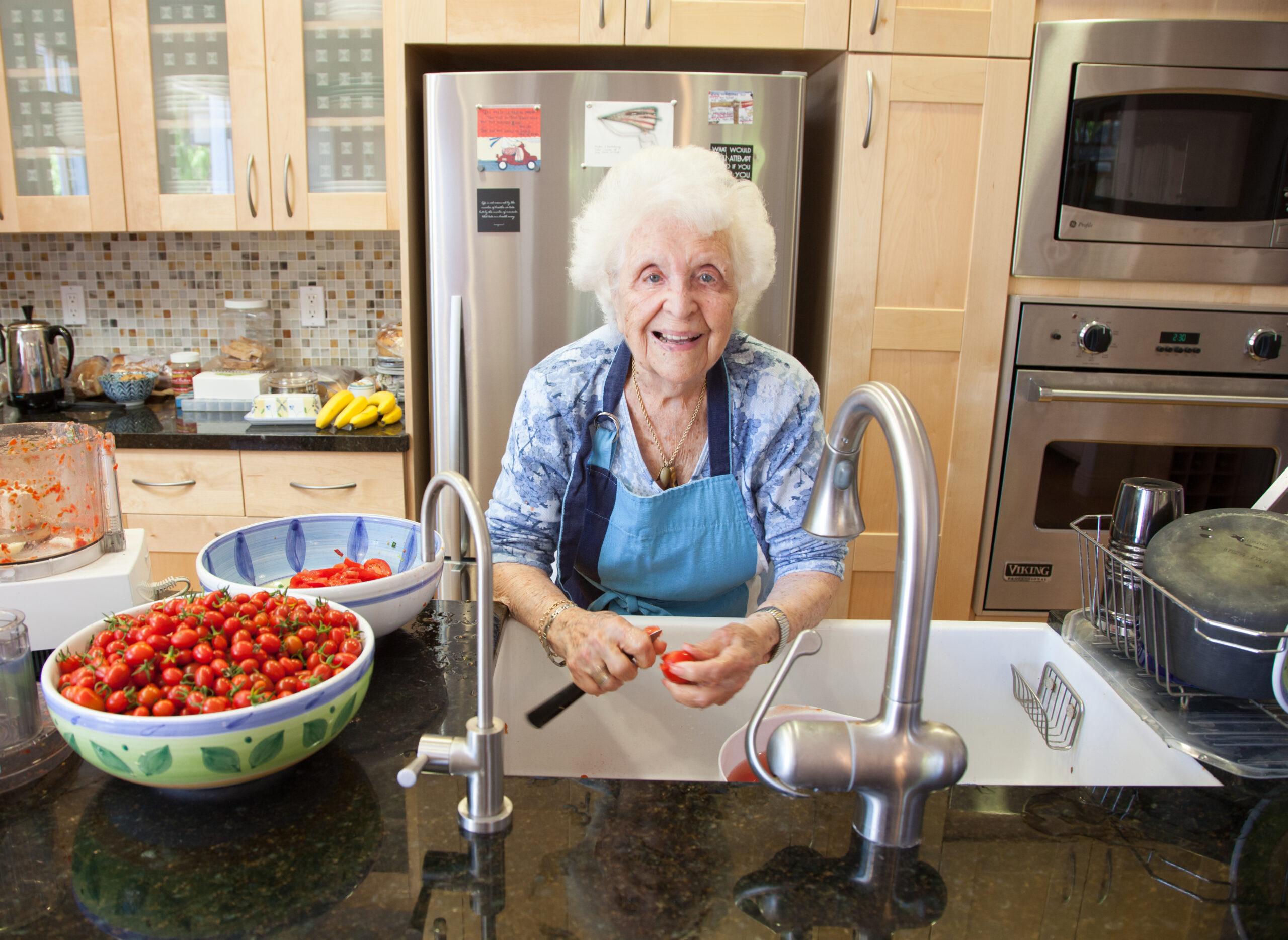 Story and Photos by SKY BERGMAN —

I grew up in my Italian grandmother’s kitchen as she chopped, grated, salted, peppered, and stirred. If you’ve ever felt comfortably held, fed, or heard, that’s what it was like to be around my grandmother’s table. She shared her love through cooking. Since early childhood I’ve cherished our time in the kitchen together, where she would enchant me with her wonderful cooking talent, wisdom, laughter, and love.

My foray into filmmaking began as I set out to film my grandmother Evelyn—then in her late 90s—create her magic in the kitchen. As with any good cook, her recipes weren’t written down. It was always “a pinch of this and handful of that.” I wanted to capture her recipes and preserve her stories and memories of our precious time together.

As I approached my 50th birthday, Evelyn was also approaching a major birthday milestone—100 trips around the sun. It was then I noticed a real disconnect between my perception of growing and being older, and what the media was depicting. I felt bombarded by negative stereotypes portrayed in media and advertising about aging, yet was enclosed in this bubble of love that emanated from my incredibly alive, almost centenarian grandmother as she cooked, laughed, worked out at the gym, and lived life to the limits.

I filmed my grandmother at the gym just before her 100th birthday because I thought no one will believe she still works out. When I asked her to share a few words of wisdom it became an epiphany moment for me. I thought: I am approaching 50 and here is my grandmother who is going to be a hundred in a couple of days. I need to find other older adults like my grandmother, people who can show what a long life well-lived looks like. It was just the first flickering of an idea, a beginning that would morph into purpose.

I never thought I would become a filmmaker. It happened because I wanted to tell a story, beginning with love of my grandmother. I have always believed that if you have a passion for something, you can make it happen. And that the more personal a story, the more universal the message. Although I am a professional photographer, I knew nothing about filmmaking. I knew nothing about sound, and had to rerecord several interviews due to rookie mistakes. I knew nothing of funding a project like this, so I got creative. My house has lots of bedrooms. I set up an Airbnb and funded the film by renting rooms in my home. Instead of saying why, I told myself, why not? Just go for it!

I spent the next four years interviewing 40 people—75 and older—with a collective life experience of 3,000 years. The common thread among all the wonderful people I interviewed was their sense of purpose.

Living with purpose is the drive that keeps us going and feeds our curiosity. Our sense of purpose can change over time depending on our life circumstances. For me, creating a film about older adults, changed mine. Interviewing the incredible people for the Lives Well Lived film gave me the courage and inspiration to take the leap and pursue my third act.

After a 30-year university career teaching photography, I decided to retire this past December. My colleagues asked me, “Why are you retiring so young when you are at the top of your game?” I realized that I had fulfilled my teaching career and decided to look through a different creative lens. I’m well on my way to publishing a book that tells more about my journey, the stories of the people in the film, and about how you can have a life well lived. I have also found my new passion: creating films and projects that inspire and foster intergenerational connections.

Why focus on connecting the generations? I was very lucky to have my grandmother in my life, yet realize many younger people don’t have a positive connection with an older adult, and as a result we are seeing a rise in ageism. To combat any type of “ism,” the first step is to cultivate a conversation and a connection—to truly see, hear, and value a person who is different from you.

I am fortunate to have a platform to foster intergenerational connections. For the past four years I’ve been working with high schools, universities, and Senior Planet members (part of AARP) across the country using the Lives Well Lived film as a catalyst to connect generations. After viewing the film, students and older adults are paired up and given questions used in the film as a starting point for a conversation, creating a bridge between students and older adults. As they take turns interviewing each other, each gains a deeper understanding of the other, and share their knowledge and wisdom about life. This connection, understanding, and common ground creates lasting, authentic intergenerational relationships. To date, these intergenerational projects have involved more than 500 students and older adults—combating stereotypes and ageism one story and one connection at a time.