If you’ve felt a growing desire to tap into your inner spiritual self as you age, then you’re not alone. More than 70% of Americans over the age of 65 report that religion is very important to them, according to a Gallup poll. 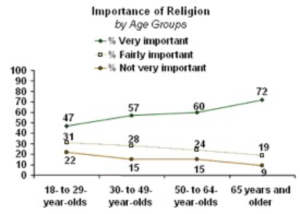 Perhaps it’s why Charles Schulz, creator of the Peanuts comic strip, inserted religious references more frequently as he got older. In fact, during the latter stages of his career, he mentioned religion and spirituality so often he started getting requests from religious publications to reprint his strips.

Religion or spirituality are very often noted for helping seniors get through major events in the second half of life.  And it’s not just for the chronically ill or the dying. Getting in touch with your spirituality is helpful for any older adult, whether he’s 60 or 90.

While each person has his or her own reason for exploring spirituality or turning to religion later in life, there are some noted theories that may help to explain why this happens. One of the most well-known is that of Carl Jung.

Here’s What Carl Jung Had to Say About Seniors & Spirituality

Jung, the creator of Analytical Psychology, stood out from his contemporaries because he was interested in human development during the second half of life rather than just the first 25 years.

If you’re not up on your Jungian psychology, he basically believed that harmony and balance in life were essential to well-being.

And the key to achieving that balance, according to Jung?

Most seniors have a desire for some type of spirituality in their lives, even if it’s not necessarily religion (there’s a difference). Religion fulfills a need in many older Americans: about half attend religious services on a regular basis, according to Merck & Co. There, they find a social network and often a sense of purpose in the community. Merck reports that for seniors, the religious community is the main source of social support, outside of family.

But spirituality doesn’t have to include institutional worship – or a community, for that matter. As Jung and many others see it, spirituality is more of an inward journey.

Jung viewed older age as a time of exuberant development and spiritual growth. In other words, life is pretty much one long continuous journey of transformation, and it doesn’t stop once you start collecting Social Security checks.

His version of spirituality involved a lot of self-reflection and inward journey-taking, something most boomers are familiar with. In fact, Jung encouraged seniors to embark upon journeys of inner discovery. It’s all part of his view that deepening spirituality is an essential process of aging.

So, what’s your take on spirituality in the 3rd act? Are you or someone you know finding more room for self-reflection? What do you think about the positive approach to aging espoused by the likes of Carl Jung?

We’d love to hear your story. Feel free to comment below and tell us about your personal version of spirituality or, if you like, the role religion plays in your life.