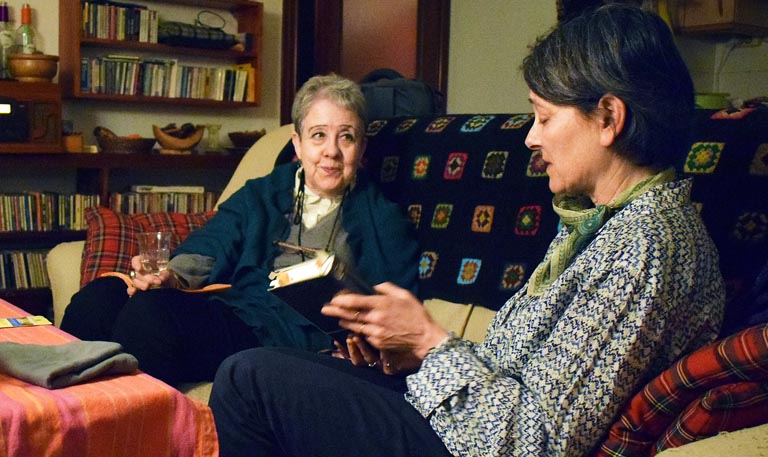 I begin to think I am sometimes trying to catch up to what has happened in a time that hasn’t happened yet.

Tess Gallagher, Is, Is Not

Tess Gallagher begins each day with meditation and silence. “Words come from silence,” she says, and if she is not present to what is within, it will not emerge; it will be lost. This practice—in spaces that verge on forests and expansive waters—sparks her inner music, her creative art, and she writes through the morning.

Then, by teatime, she opens her home to visitors. She greets her guests with a warm smile, kindness, humor, ripping yarns, and maybe a poem or two. In the evening, she may go down to the boats to hear from fishers about their day and their catch, and there she masterfully reels in more images and stories.

Gallagher, who turns 76 this summer, is one of the most admired and prolific poets working in America today. She may be best known for evocative poems and stories that bring wonder as they make the ordinary extraordinary. Readers also will recall her powerful words of love and loss, notably for her late husband, renowned author Raymond Carver, and her “beloved Irish companion” of almost 25 years, the late storyteller and painter, Josie Gray.

In her new book Is, Is Not (Graywolf Press), she writes at the height of her powers, offering revelation, stunning imagery, epiphanies, wholeness out of brokenness, interpenetrating worlds. In the book’s afterword, she writes, “. . . I seem to be writing in some sense beyond language.” Poet Scott Neuffer commented: “These poems delight with their willingness to trespass into unknown realms of thought and being.”

Gallagher describes herself as a poet of two Northwests. She usually writes at one of the two homes “in her heart”—her hometown of Port Angeles, in northwest Washington on the Strait of Juan de Fuca, and her adopted home on Lough Arrow in the parish of Ballindoon, County Sligo, in northwest Ireland.

She is a tireless traveler and has made the journey between her two homes at least once annually for more than 40 years. These round-trip cycles may help explain why Gallagher sees her life as non-linear, as a “roundness” that unseats our sense of time.

“When you have a constant coming and going pattern in your life you are making a kind of circling motion physically and emotionally,” she tells me. “You bring forward into your life elements that bind each place to the other.”

Gallagher’s creativity sustains her. She has been a literary force for decades with previous books including Instructions to the Double (1976), winner of the prestigious Elliston Award; numerous poetry collections including Midnight Lantern (2011); and three collections of short stories. She is also an essayist, a translator, a screenwriter, and a teacher. She worked alongside Carver for several years at Syracuse University, and, more recently, she was the Edward F. Arnold Visiting Professor of English at Whitman College.

Gallagher’s work is grounded in her early childhood in Port Angeles and its nearby logging camps of that time. Her mother and father were both loggers, and the life was tough, wild, and unpredictable. “I grew up in a very edgy way, day by day hanging on the prospect of not having enough food on the table,” she recalls. “I didn’t have shoes until I went to school at age five.”

Her literary influences include the legendary poet Theodore Roethke, who she studied with at the University of Washington, as well as UW poetry professors such as David Wagoner and Nelson Bentley, and other poets including Mark Strand and Stanley Kunitz. And, of course, she and her late husband Raymond Carver inspired and influenced one another.

Visual art also feeds her spirit, such as the work of her longtime friends, Seattle painters Alfredo Arreguin (profiled in 3rd Act Magazine, Winter 2019) and his wife Susan Lytle, who both bring an ethereal sense of the sublime into their work—a sensibility also evident in Gallagher’s art.

Gallagher has always found strength and inspiration in helping others, says Lytle, who calls her  “a born nurturer.” Now a celebrated chapter of American literary history, the Ray-Tess relationship demonstrated this caring nature. She met Carver in the late 1970s when he “was trying to make up for the lost time of 10 years of alcoholism which had destroyed his marriage and marooned him in bankruptcy,” she says. “He was fragile in that he was having to do without alcohol, which had been his crutch. No one gave him much of a chance to stay sober until I came into his life.”

Their friendship blossomed and, by 1979, they embarked together on a collaboration “of hearts and imaginations,” as they truly enjoyed working on each other’s writing. In their near decade together, Carver—who came to be known as “America’s Chekhov”—wrote his most famous stories and poems, and Gallagher likewise created some of her most powerful work.

Gallagher’s writing can be humorous and joyous, but she also is appreciated for her deft reflections on grief, particularly in her work after Carver’s death at age 50 in 1988. Moon Crossing Bridge (1992) is a book of poetry in his honor.

Gallagher displayed remarkable resilience in caring for Carver as lung cancer wore him away. “The alternative is a kind of self-annihilation,” she says. “Even when Ray was having the last of his life (I thought) you’re next to this person who is having the last of their life, and you want to be useful and you want them to be shining, not just given over to medicine and sustaining, but instead filling the time left with the little glimmers of life. And so as long as we could, we worked on his book, A New Path to the Waterfall.” That experience together strengthened her and helped carry her through sorrow as she turned her grief to writing about her love and admiration for Carver.

Her caring for Carver also helped her face her own aggressive cancer in the early 2000s that required four years of intensive treatment with surgery, chemotherapy, and radiation with the loss of a breast, hair, and fingernails. She suffered extreme fatigue and more.

Gallagher stresses that she had to fight for her life. “It was a quite rigorous, nasty thing. But you know what? I didn’t stop anything.” She kept writing. “That was the best thing to do because you’re fighting for your life and, if you’re not doing anything with your life, you’re not fighting very much.”

She also found comfort in her relationship with acclaimed Irish storyteller Josie Gray who she met in 1994 through his family in Ballindoon. He was her “beloved Irish companion” until his death in 2017. As with Carver, Gallagher encouraged Gray in his creative pursuits, eventually persuading him to record his stories, now collected in their book Barnacle Soup. And, even though Gray had never made visual art, Gallagher sensed a painter within, so she urged him to paint and furnished him with art supplies. By the time he died, Gray’s expressive paintings were widely exhibited and collected in the US and Ireland.

Through her loss of two great loves, Gallagher has persisted. “Many things in contemporary life subdue us, break us apart and shatter us,” she says. “In my poetry and life, I try to work toward getting things to come together, for the broken elements to point back toward the wholeness they came from.”

Her recent poem “Recognition” offers insight on the shattering:

Staring down from the bridge

in the river, who

could know, without looking

up, it stands whole above

“You see a shattered moon on the river, but then you look up and you can see a whole moon . . . an experience in the world against shattering. For me, even in our shattering, there’s also a wholeness at the core.”

Tess Gallagher provides an example of how to thrive despite life’s vicissitudes. “It’s not all Pollyanna. There’s a lot of trouble out there. . . but by rising [and]extending you become a strong presence. We don’t do anything perfectly. We have arrows sticking out of our backs . . . But by golly, I will pull my arrows out, and try my best the next time.”

In her new poem “Opening,” Gallagher reflects on her journey:

I entered this world not wanting

to come.  I’ll leave it not

wanting to go. All this while,

when it seemed there were two doors,

there was only one—this

Robin Lindley is a Seattle writer, illustrator, and attorney, and serves as features editor for the History News Network. He can be contacted at robinlindley@gmail.com.