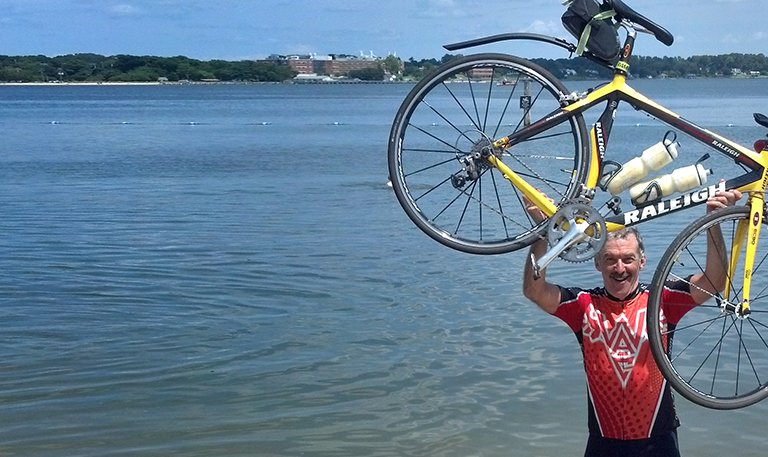 Goals are good. When I coached various sports for my four kids, I set a team goal of “fun, fitness, and friends.” We have goals most of our lives: graduating, getting a job, marrying, having kids, sending the kids to college, and retiring. But at some point, often when people retire, they stop setting goals—or they choose a vague one, like “to travel.” I’ve seen some of my contemporaries do this and become unhappy with their lives.

Continuing to set goals has kept me focused and balanced into my 60s. I set a fitness goal each year, usually focused on at least one event. I climbed Mt. Rainier when I turned 40, did a half Ironman triathlon in my 50’s, and rode my bike across the United States as a fundraiser when I turned 60. I often involve family and friends, too. For example, last year I ski toured on the Haute Route across the Alps with my son, a friend, and his daughter. This summer, I will be doing the RSVP (Ride from Seattle to Vancouver and Party) with three of my adult children and their friends.

My father used to say “act a little older when you are young, and a little younger when you are old.” I try to keep a group of active and positive friends of all ages, and with a variety of interests. Our family is close and I spend a lot of time with people in their 20s and 30s. Yet two of my good skiing and biking friends are in their mid-70s.

I try new things whenever I can. This spring, on our annual trip to Arizona, my wife and I joined a bird-watching group tour at a nature reserve. I was the only one without binoculars and a notebook to record sightings. After three hours, the tour was nearly over and the others had 10 to 20 sightings each. Determined to make my first sighting, I spotted a large soaring bird far away over a cliff. I called out “eagle,” and the group was all aflutter.

One of the experts studied it carefully through his binoculars, paused, and said rather disdainfully, “common raven.” Collective letdown. But later I was partially vindicated at the reserve headquarters when I got my name on the board for the first common raven sighting of the year! The next day, at another bird refuge, I successfully identified a blue heron at a distance, to the collective mirth of the birders around me, one of whom informed me that it was in fact a metal sculpture of a blue heron. I have a long way to go as a birder.

There are things that I can’t do any more, but I substitute. Running hurts my knees, so I bike; a deep-water start for water skiing is too stressful on one ski, so I start with two skis and drop one; I snow ski but avoid jumping. I stretch and do core work daily to keep multiple strains and aches at bay. I have been to physical therapy so many times I could get an honorary degree.

In my 20s, it was basketball, soccer, and tennis. Now it is Pilates and yoga and water exercise. Tai chi is just around the corner. As one of my very fit 75-year-old friends says, “You are only as old as you feel…until you try to prove it.”

Gary Duvall works part time as a franchise lawyer, frequently provides care for three grandchildren, and is becoming more fluent in French. Vive les vieux! (Old guys rock!) To see how and why he raised $10,000 for Crohn’s and colitis disease, see garyduvall.blogspot.com.