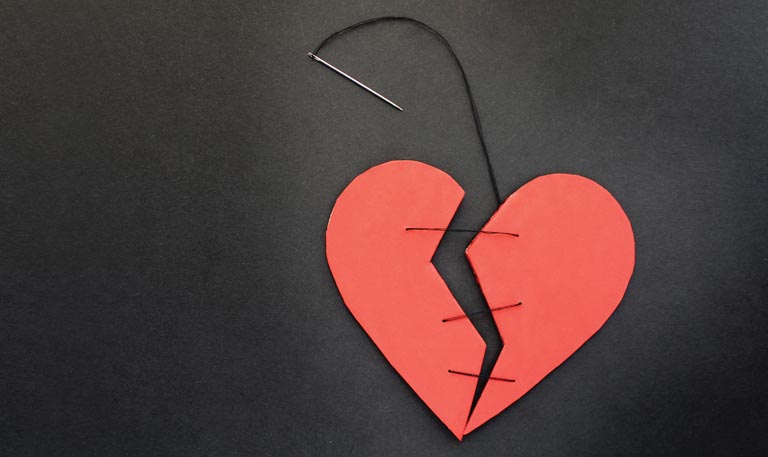 “It is not stress that kills us. It is our reaction to it.” – Hans Selye, the father of modern theories on stress

It’s a privilege to grow older. It’s also pretty much a losing proposition. Inevitably, there will be gut-punch losses—of loved ones, health, maybe finances, definitely looks—the list is long and sure.

Loss can even kill, via the now well-documented condition called broken heart syndrome. But before you take to your bed and pull the covers over your head, here’s the good news: The syndrome is rare and its cause is avoidable.

Dr. Gopi Dandamudi, medical director of the Cardiovascular Service Line at CHI Franciscan, notes that broken heart syndrome appears to be directly tied to stress, and in fact goes by the name of stress-induced cardiomyopathy. “We think it’s caused by high levels of physical or emotional stress, related to excessive adrenaline in the bloodstream. That gets the heart pumping and working harder,” he says. “Maybe there’s a death in the family or someone has a heated argument with their spouse.” Within a few days, they can show symptoms like those of a heart attack, like shortness of breath and chest pain.

Although broken heart syndrome is potentially fatal, most people recover. “It’s very reversible,” says Dandamudi. “In two months, the heart is back to normal with no visible damage.”

Ninety percent of patients with the ailment are post-menopausal women, but it remains unclear why. Thankfully, the problem isn’t common. “One to two percent of what presents as a heart attack ends up being this condition,” he says, noting that far more common in older adults—men and women—is a heart-rhythm problem called atrial fibrillation, which can lead to stroke.

Prevention, while no guarantee, is preferred. “When you reduce stress, you reduce the heart’s fight-or-flight response to adrenaline,” Dandamudi says. But if chilling out were easy, everyone would be laid back. How can you create calm, especially in trying circumstances?

“You can’t think your way to it, and it takes practice,” says Jonathan Prescott, a Buddhist chaplain who founded Wise Caregiving, an organization that supports patients and their caregivers.

As an ordained student of world-renowned Zen master Thich Nhat Hanh, Prescott has worked with patients in hospice, cancer care, and hospitals. He deeply experiences and understands the Buddhist doctrine of impermanence.

“Nothing lasts forever,” Prescott says. “When people think of that they naturally go, ‘Yuck,’ but I encourage themto sidle up to the idea and make friends with it,” he says. “Start small. That beautiful peach you brought home is overripe and now you can’t eat it. Just notice.”

And notice reactions to small, daily losses, frustrations, and annoyances. “By practicing, by being aware of how we respond to stress, we can retrain our responses to that stress,” Prescott adds.

Prescott learned to watch his own anxiety when he’s with patients. “It’s easier to notice anxiety in my body rather than in my mind,” he says. “When I see that I’m rubbing my hands together, I realize I’m anxious. So I relax my hands and my anxiety relaxes along with them.”

He advises adopting an attitude of allowing rather than fighting, resisting, or steeling ourselves to misfortune. “We may tell ourselves a story, that this shouldn’t happen or things shouldn’t be this way or I’ll never recover, all of which create stress,” he says. “When you allow things to be as they actually are, you develop the confidence that you can have pain and still be OK.”

The omnipresent advice is to simply “let go,” but what does that even mean and how does one do that?

“It’s about non-attachment, not grasping,” explains Prescott. “By that, I don’t mean disengagement, not living a vibrant life of enjoyment. Non-attachment means we don’t hold on for dear life but cherish things because they don’t last forever. They’re precious.”

These practices will not insulate you from loss, he notes, but they may reduce the stress related to loss. “In fact, you feel more acutely—all of the hard things but also all of the beautiful things in your life.”