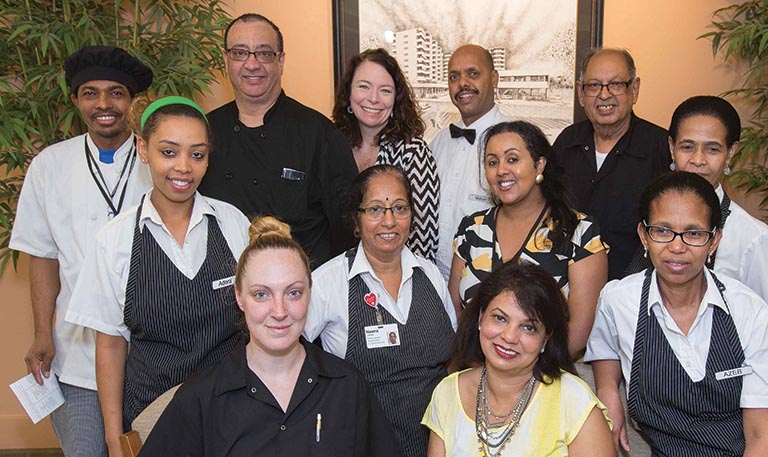 If you’re lucky enough to live a long life, you will likely meet people from countries you have never visited. They may be your caregivers, and they will come from all over the world, bringing with them a level of dedication that you might well find startling.

At the Hearthstone at Green Lake, employees come from at least 27 countries. This fact led Leading Age Washington to give the Hearthstone an award of excellence for its longtime commitment to cultural diversity and inclusion, and the employees speak warmly of their passion for the work.

“I know this is my calling,” says nursing assistant Meredith Malabuen, who comes from the Philippines and has been at the Hearthstone for 17 years.

“Helping others is my forté,” explains human resources coordinator Mulu Habtyimer, who hails from Ethiopia. “I love it: that wonderful, warm feeling.”

Maza Gebregenet, a nurse’s aide from Eritrea, jokes that she’s known as the “hug aide,” because she loves to hug everyone, especially the residents with dementia. It makes them feel safer, Gebregenet says. Every day she asks herself, “How can I make them happy?”

When Hearthstone Director of Nursing Services Hamadi Sisawo came to the United States on a student visa, his goal was to become a computer engineer. But he found that what he really loved was the night job he took to finance his studies: working as a certified nursing assistant at the Hearthstone. Sisawo, who grew up on a peanut farm in rural Gambia, switched course and eventually became a registered nurse.

Several promotions later, he now leads a staff that has maintained a zero-mistake, five-star rating for two straight years. The nurses and aides Sisawo supervises come from all over the world, but for Sisawo, cross-cultural communication is not the biggest challenge. “Being a male RN in a female world” is more daunting, he insists.

Arlene Calague, Hearthstone’s Minimum Data Sets Coordinator, works closely with Sisawo. Calague, who came here from the Philippines 17 years ago, is also an RN. A big part of her job is to help colleagues for whom English is a second language master the details of health care documentation. “I always talk one-on-one,” she says, with a goal to “explain and educate.”

Arlene, Hamadi, Maza, Meredith, and Mulu—the Hearthstone is really a first-name kind of place—are just a few of the employees I talked to when I visited. I also met Pema Dorjee from Tibet, Poonam Kumari and Farzana Bi, both from Fiji, and Glenda Vicuna-Searles, from Peru. All of them love learning about each others’ countries and sharing their customs and foods with residents on monthly Culture Days. They call it continuing education: the best kind, the kind that happens when you’re enjoying yourself.

Education is a popular word here among staff. It’s also a favorite among residents, many of whom are former University of Washington professors or schoolteachers like Lynn Burnett, who has lived at the Hearthstone since 1997. Burnett is a member of the Daughters of the American Revolution and can trace her ancestors back to the Mayflower, yet she’s globally minded. She and many other Hearthstone residents are well-traveled and take great pleasure in learning about employees’ cultures and languages. “It sounds trite, but we’re like family,” she adds.

For several years, Burnett and another resident led a group of volunteer tutors to work with Hearthstone employees who willingly gave up break time or stayed late to learn the English words they needed to do their job. Burnett has also helped many employees study for their American citizenship exams. She’s been to many of their naturalization ceremonies and weddings. She even has an Eritrean granddaughter: “adopted” as a baby, the orphaned niece of an employee, her grandchild Ruth is now 14 and visits Burnett regularly.

Hearthstone employees also talk a lot about how the residents are like family members. (Vicuna-Searles calls them “our grandparents.”) Nearly all of them explain that they come from countries where there is no such thing as long-term care. Caring for elders happens at home. It’s a skill they witnessed, and learned, when they were very young. But they live here now, and understand firsthand the time and money pressures facing adult children in the United States.

“All of my children were born here,” Calague points out. “When I grow old, I’ll cross that same bridge!”

The Hearthstone employees are used to crossing bridges: they do it every day on the job. “You see people working in harmony,” says Habtyimer. “Ethiopians and Eritreans, for example. It gives you hope. It’s a beautiful thing to see.”

The notion of diversity as an opportunity to live a richer life, rather than a daunting challenge, is an attitude shift that could have a profound impact both inside and outside the world of senior living. When adult children and grandchildren visit their elders’ retirement homes, they too get to meet caregivers who come from faraway places. My mother, who died at 74 of Alzheimer’s disease, was cared for in her final years by loving aides from several countries. When a doctor or nurse visited her at her adult family home, it was Landing Faburay, from Gambia, who kept her calm during the exam. Witnessing his compassion was, for me, a profound lesson in empathy and attentiveness.

As was my visit to the Hearthstone. None of us wants to believe we’ll ever need hands-on caregiving. But the chances are good that we will. It’s reassuring to know that it’s likely we’ll be in good, kind, loving hands that bring with them traditions of compassionate care from around the world.

Ann Hedreen is a writer, filmmaker and the author of Her Beautiful Brain, winner of a 2016 Next Generation Indie book award. Together, Ann and her husband Rustin Thompson own White Noise Productions and have made more than 150 short films and five feature documentaries, including Quick Brown Fox: an Alzheimer’s Story. Their newest film, set in Peru and inspired by Ann’s great-uncle, is Zona Intangible.