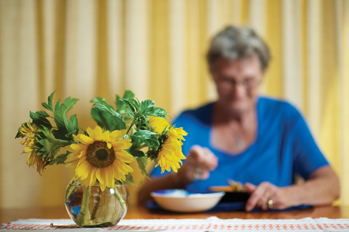 Being a sucker for a pair of blue eyes, I couldn’t help but stare at the stunning azure ones emitting a sparkle, to rival my young son when he’s up to no good. Then, the lovely lady behind those beautiful baby blues smiled at me, and I was instantly smitten. Am I thinking about Alzheimer’s, nutrition, and the dining experience? No, not unless handing over the entire cookie jar to her counts!

I am not a caregiver, not in the official sense. I am the Business Office Manager for HomePlace Special Care Oak Harbor. I am more accustomed to collecting rent and chatting with families, than being called into service for caregiving. Fortunately, HomePlace requires all staff to be trained and prepared whenever needed. This gives me the occasional opportunity to leave my office kingdom and step into another realm, the realm of Alzheimer’s. A realm where nothing is as it should be: Alice can’t even find the rabbit hole anymore, Dorothy is never going back to Kansas, and the train station is in the back alley, unless the ferry docks first. I open the door and cross the threshold.

The sharing of meals goes back as far as time. In our perpetually rushed society, filled with fast food and a host of media activities, much of the enjoyment in shared meals has been lost. Families used to sit down to the dinner table and talk to each other. It was a great time to connect, to plan, to solve world problems. Having grown up in such a family, it was a natural thing to converse during mealtime. In the area where residents need the highest care, however, many of our residents no longer speak or even carry on a conversation. I have found I’m horribly inept at one-sided conversation, delivering silly statements about the weather and little else. Cream of Wheat was my savior. Yes, hot cereal. It started with the memory of my mother, singing the Cream of Wheat advertisement song.

Do you know the Cream of Wheat song? I ask one of our residents. My mom used to sing it to us every time we had it for breakfast. It’s my all time favorite, especially with brown sugar and milk. It sure looks good today. Once the self conscious embarrassment is over, it’s easy to come up with subjects.Perhaps the antics of the cat or dog, something the children have accomplished, weddings, umbrellas, sledding, apples, the list is endless, but best of all, they love me for it.

Not being able to articulate well enough for conversation does not mean that communication is nonexistent. Take Mr. D for instance.He kept staring at his plate as though he was unsure what to do with its contents. I explained my actions, as I placed the fork in his hand. I made sure his food was manageable, and that nothing needed to be cut up. I placed my hand over his, and lifted the fork to his mouth. He allowed this for a few bites, then looked directly at me and said in an unmistakably annoyed tone, I can do this myself. You most certainly can. Thank you for reminding me. While the rebuff brought a bit of blush to my cheeks, I had assumed he was confused without really finding out. Turns out he hates green vegetables, and those green beans were not appealing. He was probably trying to figure out how to get rid of them!

Mr. K had not touched his cereal. He is not always able to feed himself, so I mixed in the milk and asked if he’d like to try some. Receptive for a moment, he suddenly dropped both hands onto the table and shouted, NO! I was a bit taken back by this unexpected response, but I had to admit, the eggs and sausage looked really good in spite of my hot cereal worship. The hot cereal disappeared, and the real food was front and center. Mr. K didn’t hesitate, and definitely did not need any assistance. He paused, mid sausage, and stared at me. He then threw back his head, and gave a boisterous belly laugh. Looks like the joke is on me.

Every resident has his or her favorite and not so favorite foods. Some don’t like spinach, while others aren’t so fond of peaches. Personally, unless its in the form of a chip, I don’t like blue potatoes on my plate. I think it looks like something that I lost in my refrigerator. Residents often won’t eat wild rice, or potatoes with parsley. To them, it looks like bugs in the food! My Dad used to own a restaurant, and we were taught that the customer was always right. I’ve discovered the same holds true for our residents .If I remember I have my own preferences, I’m much better at remembering theirs.

Constant conversation is not always necessary or appreciated.Mr. B, for instance, had a wonderful family. They loved him and doted on him. Every day they came in to help him during lunch. Unfortunately, they expected him to respond and act as he had prior to the onset of Alzheimer’s. Not only was this a source of frustration for his family, it also brought on much undo stress to Mr. B. His solution? He shut his eyes and pretended to sleep. This solution was used in a variety of settings, but was most effective at mealtimes. The wife would stay a few moments, then leave, stopping by the office to say he was sleepy again. Mr. B, on the opposite side of the door, was now merrily consuming his meal. The moral of the story is, sometimes we just need a little space.

You don’t really need my help, do you? You’re managing just fine. Yes, he turned his head and cocked an eyebrow, grinning, but its not nearly as much fun. Now I had a belly laugh!

Most of us, especially the elderly, do not drink enough fluid throughout the day. Getting enough fluid in our systems can prevent a host of ailments, especially urinary tract infections. For those with swallowing difficulties, drinking anything can be a frightening experience. Thickened fluids can make intake much easier and still be satisfying. Straws and sippy cups can be used to give the person more control. It’s much less frustrating to sip, than to end up with juice down your front. One of my favorites is a cut away cup that allows residents to drink the last drop without having it stick to the end of their nose. Dignity in dining, thats the key. If it dribbles down a chin or corner of the mouth, dab it away gently with a napkin and offer a smile. It’s the least we can do for each other.

Bite size and portions can make a huge difference in dining enjoyment. Mrs. B is a dainty lady with deep brown eyes.S he cannot feed herself and rarely speaks. She will not open her mouth if the bite on the fork is too large. She will refuse to look at you if she does not like the food offered. She has body language honed to a fine science. However, when offered tiny bites from a plate with small portions, she is much more receptive. The amount of food on a plate can look overwhelming to some. Most of our residents were raised in a time where waste was not acceptable and you cleaned your plate. Too much food can cause despair, as residents feel they will never be able to finish. On the flip side, sometimes there needs to be more. Many men often need larger portions to feel satisfied. Family members can become alarmed at visible weight gain, especially if their loved one was “always thin.” Alzheimer’s will eventually make it harder and harder for residents to take in the amounts needed to maintain weight, so having a bit of padding is not always detrimental.

Health shakes are a good nutritional supplement during times when residents are unable, or unwilling to eat conventional fare. As with other food items that can be perceived as “treats”, they do need to be a supplement, not a substitute for meals. They can be particularly effective when a resident has been ill and is unable to consume their normal dietary intake, giving them a boost until they are on the mend. They can also be useful at end of life stages, when swallowing more textured substances is no longer possible.

Texture and looks are paramount. Ms. M, who has a pureed diet, takes one look at Ms. T’s plate and says, “I want what she has.” Of course, she is eating the same thing, but aside from the color, it has no resemblance. The texture is definitely different. Puree is necessary at times, and challenging to present attractively. Only recently did I read of innovative companies trying to recreate their pureed plates to actually look like the “real thing.” Round peas, carrot slices complete with ridges, and meat shaped like a chicken leg or steak. It may not be possible or cost effective to create masterpiece plates, but the idea is brilliant and well worth considering.

If a person does not need puree, but cannot manage food presented in its regular state, it can be cut up or chopped into smaller pieces, then arranged attractively.

Quirks of the brain fascinate me. They seem to pop up out of nowhere. A resident eats exactly half their plate of food, as though an invisible line was drawn down the middle. Hmm.. A turn of the plate and they finish their meal. They can only see one side. Ms. L has difficulty getting her food from her plate to her mouth. While she is using her fork, the food is falling off the plate. Perhaps a scoop plate is in order, so she can scoop her food into the sides and not lose it off the plate. Not only does this guarantee she is getting what she needs, but also gives her a sense of accomplishment as well.

Is it as simple as it sounds? No, not at all, and I give our caregivers kudos for the hard work and patience they exhibit each and every day. Ms. B is a diminutive woman. As tiny as she is, she is a voice to be reckoned with. She cannot remember from moment to moment if she has asked for help. Consequently, she asks constantly, “Can you help me? Who can help me? Will you help me? How do I know you can help me?” Assured that any one of us can help her with whatever she may need, she looks down at her plate and asks, “Do I like this?” Yes, that question can be challenging.

One day spaghetti is a favorite, the next time it’s shoved aside. Day after day, meal after meal, it’s easy to forget that it’s a chance for an intimate exchange, a smile, a pat on the hand, a back rub. See those blue eyes? Aren’t they beautiful? Some days they can make my brown eyes blue, and a little teary. I ache for all the lovely, dear people entrusted to our care, and I wish it were different for them. It is every day though, that they make my heart sing, delighting in the honor I’m given to share in their lives.

Mealtime is over, and everyone is full, clean, and satisfied. It is time to return to the realm of the office kingdom, where trees have been manufactured into paper and the constant hum of the computer is ever before me. I pause at the door. Do I like this? I wouldn’t trade it for the world.