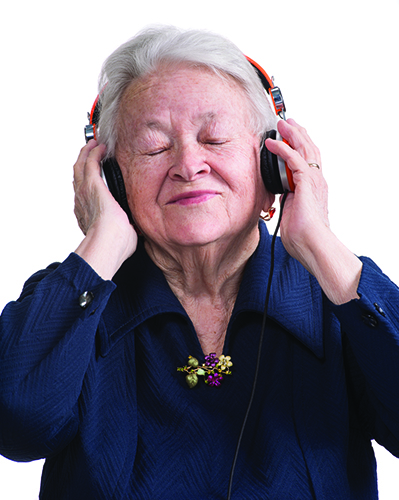 When composing music, musicians know how intuitively it affects our bodies. Opera singer, Irene Gubrud said, As a very young child, I experienced who I was through sound. I felt whole. She and many other musicians remind us that our early connection to sound is another reason for its power. Since we live in a visual society, most believe we focus on sight more than sound.

Scientific evidence and pilot music studies tell us otherwise. The ear has a head start over the eye, because unlike the eye, the ear is active in the womb. Sound literally penetrates the human body. We don’t see anything until we are out of the womb, but the ear starts to function during the first stages of life.

Music therapy can be a very effective tool for individuals with Alzheimer’s, and late stages of dementia. Since music and sounds are the first things we hear in life, and music is controlled by our early memories, it can be extremely effective in improving their mood, emotional states, and decreasing agitation.

We partnered with the Snohomish County Music Project (SCMP), to conduct a pilot study at Quail Park of Lynnwood, to see firsthand how music can make a difference in our residents lives.

After a few sessions, the participants showed consistent memory recall with their songs and other related information, improvement of their moods and emotions, a decrease in agitation and aggressive behaviors, and increased cognitive function. Participants were given iPods loaded with their favorite genre of music, and songs, to use during the music therapy sessions.

Christine Browne, the life enhancement director at Quail Park of Lynnwood, said the music therapy sessions literally had an awakening effect among the participants. Most of the residents in the study had agitation problems; some were very aggressive, while others couldnt communicate. With the music therapy sessions, their bad behaviors went away. Feelings are often lost in the late stages of dementia or Alzheimer’s. So more importantly, music brought back their emotions and feelings of life that nothing else really could.

The singing sessions in the pilot study engaged more than just the brain, and the area related to singing. As singing activated the left side of the brain, listening to music sparked activity on the right side of the brain. With so much of the brain being stimulated, the participants were exercising more mind power than usual. This led to a dramatic increase of positive social behaviors, and interactions with the caregivers and staff.

If you are thinking about implementing music therapy, whether at a community or at home, here are some recommended steps you can take to provide music to your loved ones or significant other:

By creating your own music therapy sessions, you can expect it to lessen anxieties, decrease the need for certain medications, deal with traumatic memories or dreams, and improve your residents mood and overall emotional wellbeing.