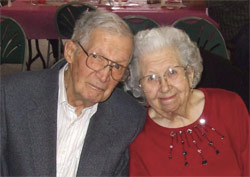 Eva and Frances celebrated their first Valentine’s Day in 1934 at a local dance. More than seven decades later and many dances in between, they celebrated again in front of friends and family. On that same special day, they renewed their wedding vows as Mr. and Mrs.Wise.

Both in their early 90’s now, Eva and Frances have been married nearly 72 years. Frances says that their secret is, “be patient with each other and things will work out.” Enduring the effects of the Great Depression may have had something to do with this important virtue that they’ve both held onto during this successful union. Francis also mentions,”things were good, not perfect, but good.”They’ll tell you they faced their share of adversity, and life was full of hard work. However, through it all, their love continued to thrive.

The lasting love of Mr.and Mrs.Wise is a true inspiration to many. Finding a true Valentine’s Day love that lasts the tests of time results from holding on, compromising, and listening. Their 34 year-old, single grandson even states, “They give me hope.” Frances will tell you it is his wife’s “million dollar smile.” Eva relates with a more symbolic figure in history. As Mother Theresa once said, and Eva believes,”If you judge people, you have no time to love them.” In this case, Eva feels she has had plenty of time to love without judgment, and looks forward to the years ahead.At their original ceremony, Frances vowed to listen more, and Eva to keep an open mind.Together, 71 years later, they made these same vows again.

In a time of shortlived marriages and a rising divorce rate, life-long love can often times be a wonder for so many. Fortunately for Mr. and Mrs. Frances Wise, their lasting devotion is nothing short of remarkable. Leading up to this Valentines Day ceremony, Eva gathered old photos and reminisced of their lives together. The Wise’s grew up in a small town in South Dakota, and played together as little children. Eva relived standing outside the courthouse immediately before their marriage, and the anticipation she felt. After they were married they had four children, and faced the challenges of losing one of them. Clearly,there were ups and downs,but the Wise’s love endured.

Reliving these memories, made revitalizing their union just as important today as it was 71 years before. The same nerves soared through them the second time around, just as they had on their first. The ceremony was a beautiful example of their love for each other.They sat under an arbor, and again pledged themselves to each other. Afterwards, the champagne flowed, a toast was made, family smiled and cried, and the cake was cut. Eva said,”time sure flies when you are having fun!” Words of inspiration for us all to live by, and words the Wise couple certainly did.