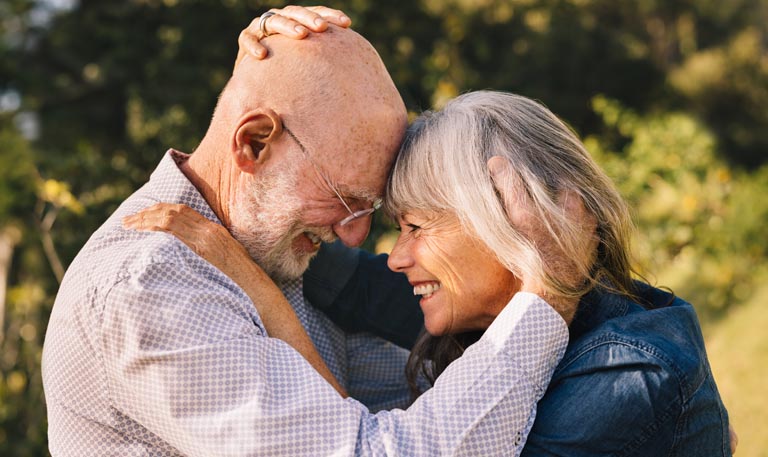 You’re in love. It’s going great, and you’ve moved from thinking about your next date to considering a long-term commitment. When you’re over 60 and over the moon, though, there’s a lot more to think about than bridesmaids’ dresses.

“I think the feeling of love is universal, but it’s also matched to where we are in life and how we show up,” says Ross Kling, a marriage and family therapist in Seattle. “The beauty of falling in love at any age is that it creates a new future for you.”

That new future takes a bit of work. Older adults have spent decades forming patterns for themselves. How do you honor someone else’s life patterns, experiences, and choices and blend them with your own?

“There are two aspects to patterns,” says Kling. “The ones that support our individuality, and the ones that keep us from growing—as in, being in a rut.” As a therapist, Kling suggests embracing things that define your partner and weaving them together with your own patterns. Take a hard look at behaviors that don’t support the relationship, though. You might not be able to change them, but with communication, there could be adjustment and compromise.

“Important questions absolutely should be talked about, but the answers can be really hard and will vary from one couple to the next,” says Judith Gordon, a Seattle psychologist. “It’s a very challenging time to be in a relationship.”

At any age, a relationship’s lifespan can be affected by many things that might, or might not, happen. For older adults, though, the actual human lifespan is a factor. There are risks involved. The possibility of physical or mental decline is real.

Gordon started her own later-in-life relationship in her early 60s. “When I met Lance, age didn’t matter. I was vital, he was vital. We didn’t have limitations. We hadn’t experienced loss.” Now, at 80 and 79, age is starting to affect the choices they make as a couple, even things that used to be simple. For example, they used to have three cats that lived out happy lives. Now they’d like to get more cats, but kittens might outlive them. “When you’re young,” says Gordon, “you just deal with it. Now we have to be more responsible and think it through.”

Decisions about housing are another issue. Living in a multi-level townhouse, with stairs, is beginning to be a concern, as is simply living in Seattle. “We’re thinking about other options, maybe Whidbey Island,” says Gordon. “But we have to take more factors into consideration, such as health care on an island.” It also takes motivation and energy to move and to set up a new home.

Essential conversation topics include whether to explore senior housing options that offer various levels of care; what will happen if one of you needs to become a caregiver for the other; and how close you want to live to your kids. And then there’s the talk about physical intimacy and what each person wants and expects.

“Talking about sex is awkward at any age, but as we get older, it’s more important. There will be changes and differences,” says Gordon. “There are losses that are hard to accept and have to be dealt with.” But sex can be good even with those changes. Fortunately, adds Gordon, there are more books about it now, and more information and discussion than there used to be.

Communication is key to every aspect of living together. “It’s really important to talk about all those things, so you know where the other person stands. You’ve shared concerns and there are no real surprises. It’s easier to talk when it’s not a crisis,” says Gordon. “Later, you can build on previous conversations. It’s an ongoing partnership.”

For couples who choose to move in together or marry, there are important financial and legal decisions to consider, too. This may be one of the most uncomfortable issues to discuss. LuAnne Perry, a family law attorney in Seattle, has seen the problems that arise when people don’t talk.

“Introduce it before you start living together,” says Perry. “You should be able to have a frank conversation and say, ‘We need to be aware of things and how we feel about them.’”

In Washington state, older adults have some different issues than younger ones. For example, if one partner has quite a bit more wealth than the other, and both are retired, there would be no community property. “If they weren’t creating new wealth,” says Perry, “then if they were to break up or one dies, there would be no jointly held property. So if one moved into a house already owned by the other, they wouldn’t be getting any property rights at all.”

“The older someone is when they get into a new relationship,” says Perry, “the more they want to keep what they brought into it. That’s definitely even more true if they have kids.” When one partner has significantly more wealth than the other, though, there could be an agreement that the other would get a percentage of the estate, or perhaps be able to live in the house they shared for a period of time when one dies.

It’s so much more complicated than starting out together at 25 or so, but it can be done successfully. Gordon and her partner co-own their house, but all other finances are separate, and their money will be left separately to their sons.

“I didn’t understand about getting older,” says Gordon. “A lot of it is about the mental, existential stuff. I’m still me, but the realities are different.” Her son, she said, gave her the best advice. “He said to me, ‘Decide how you want to live your life. Then, whatever happens, you’ll deal with it.’ I think that’s wonderful.”