Kids these days – they’re spoiled, rude, and lazy. Or so every generation since the dawn of history has ever claimed. Today’s kids, however, are actually something different from their predecessors: twice as likely to be raised by their grandparents.

According to the U.S. Census Bureau, about 2.7 million kids are raised primarily by their grandparents. That’s roughly double what it was in 1970, when only about three percent of children lived in households maintained by grandparents. As for households where three generations are present? 60 percent of those had the older adults (grandparents) down as the primary caregivers for the kids.

Grandfamilies: Everyone Feels the Impact

Social workers have certainly noted the trend since it has a great impact on families and children. And zooming out, cultural anthropologists and sociologists might be interested in what this trend means for society.  But has anyone stopped to ponder the impact of this on the grandparents’ bank account?

Raising a Grandchild: the Same as Raising a Child?

How much does it cost to raise a grandchild?

You could answer that question with a simple, “about the same as it does to raise a child”. That’s a simplistic view of things, since several factors are different when it’s Grandma and Grandpa, not Mom and Dad.

For starters, it’s often an unexpected arrangement. For older Americans, becoming a grandparent can coincide with getting ready to retire. Some are already retired when they suddenly find themselves immersed in a new child-rearing role.

Secondly, oftentimes the reason the new arrangements are sudden is also the reason that legal issues come into play. Some grandparents find themselves needing lawyers to get their grandchildren out of foster homes or for other custody-related processes. If there’s a family crisis, they may be called upon to help their adult child, too. All that adds up and they haven’t bought one diaper yet. Legal fees can be in the tens of thousands of dollars.

In some situations, when grandparents become the primary caregiver for their grandchildren and the parents aren’t around, it’s not just a family matter. It’s a legal arrangement where they technically become foster parents. That’s a whole new can of worms, since becoming a foster parent is a process in and of itself. One must ‘qualify’ even though in this situation it’s a family affair.

Qualifying means applying for a license, which in turn means the senior’s home must meet state regulations for foster care. There’s another bill: home renovations. If the grandparents don’t qualify to be foster parents, they miss out on state payments for the care of each child. They vary by state but usually amount to several hundred dollars per child per month.

The University of California/Los Angeles crunched the numbers on California’s 30,000 grandparents over 65 who were raising their grandkids. They took into account the following presumed expenses:

(Note: They did not include health care expenses since the State of California has a program (Medi-Cal) to cover kids in this type of situation.)

What they found was that the cost of raising a grandchild is, in many cases, more than double the median Social Security payment and almost double the Federal Poverty Level (FPL). 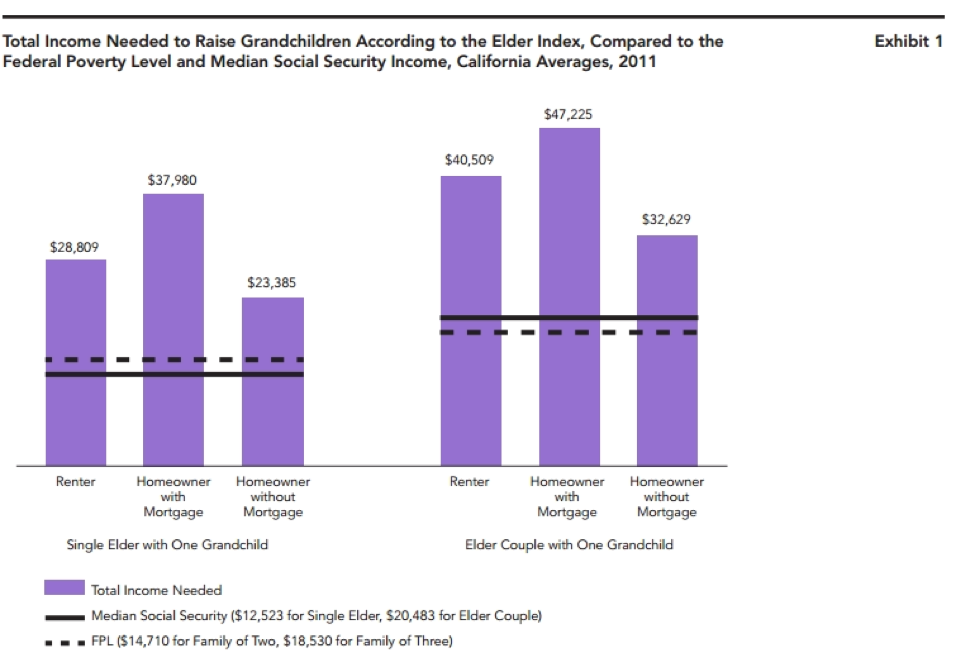 For seniors, the life-changing events that lead up to gaining custody of their grandchildren can be overwhelming. Add to that stress is the financial burden they take on. Older adults who are raising their children’s children need access to all the resources they can get their hands on. It’s important to recognize their sacrifices as they struggle to keep their families together.

If you’d like to keep up on this issue and others faced by older adults, we invite you to subscribe to 3rd Act Magazine for the latest news on aging, wellness and more.