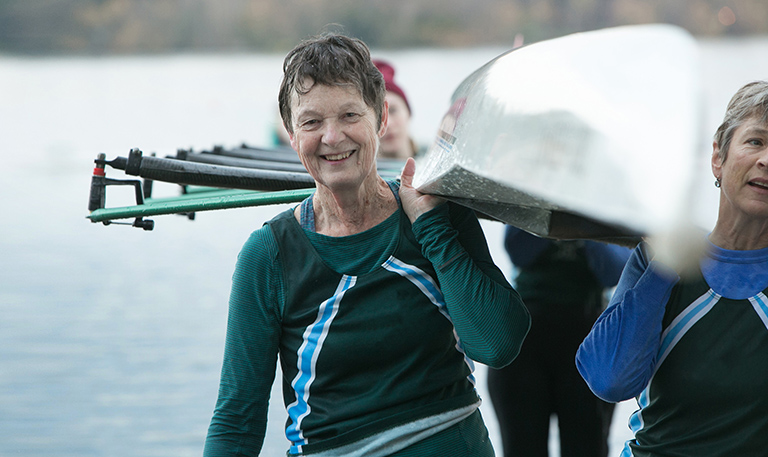 Perhaps you’ve watched a team of rowers glide their slender craft across the water—in harmony with each other, their boat, the water, and the sky—and maybe you’ve felt a twinge of envy. Good news: You are never too old to row, and you couldn’t live in a better place than the Pacific Northwest to learn the sport.

Dozens of rowing clubs in the Puget Sound region offer masters rowing programs. (Masters means they’re for adults, rather than younger rowers.) Visit any one of them and you’ll meet women in their 60s, 70s, and beyond—many who had never before pursued athletics—who are enjoying newfound physical strength, flexibility, and balance, as well as mental, emotional, and social benefits both on and off the water.

“It’s a sport that women of any age can excel at,” says Wendy Caldwell, a retired media director who started rowing on Green Lake 13 years ago at the age of 58 after seeing the transformational effect it had on her son, who was in high school at the time. “As we get older, we are looking for sports in which we can feel confident and competent. And since rowing is a sport for all ages, it fits in nicely.”

Rowing is easy on the joints, it’s a terrific cardiovascular workout, and it engages every major muscle group in the body. It’s a misconception that rowing requires tremendous upper body strength. About 60 percent of the power comes from the legs, with another 20 percent from the core. And strength is only part of the equation: The sport also requires cooperation, timing, mental stamina, and technique—all skills that women do well, and ones that often improve with age.

Caldwell recently read a story written by a young rower regarding his experience in the prestigious Head of the Charles Regatta, a 3-mile race held each fall on the Charles River in Boston. Noting an obvious age difference of several decades between himself and the rower ahead of him, he assumed he’d overtake his senior competitor in no time. In fact, he never did. “He was counting on power over technique,” Caldwell says. “But technique always gives the advantage. It just does.”

Sue Harper, 70, learned to row just six years ago. Like all women of her generation, she completed her high school and college education before federal Title IX legislation expanded athletic opportunities for women in the mid-1970s. Athletics had not been part of her life, and rowing was the first strenuous, competitive sport she ever pursued. But last year, Harper ranked number two in the world in her age group for the 1000-meter sprint on the indoor rower.

It’s no surprise she reports being in the best physical shape of her life. But for Harper, who is a life coach and spiritual director, the sport brings far more than a strenuous workout. It is also “a meditation, a spiritual discipline, a practice of letting go of thoughts that aren’t relevant to the task, of breaking the habit of obsessive thinking. Your mind isn’t cluttered when you’re rowing,” she said.

For Anne Martin, 68, rowing provides serenity, simplicity, and solitude, which she enjoys in a “single,” a one-person sculling boat with two oars. During her long career teaching sociology at Edmonds Community College, rowing helped balance the extroverted requirements of her work. “I love being on the water, the open air, seeing the ospreys, the eagles and the coots,” she recalls. “The early morning rows, whether in the light or the dark, were a touchstone in the day, a way to keep some stillness in my pocket.”

In winter, she and her fellow rowers attached lights to their boats and rowed before sunrise. “Rowing in the wine-dark lake, under a velvet sky, had its own kind of beauty, stillness, and quiet,” she says.

Despite the many dozens of medals Martin, Harper, and Caldwell have won in regattas over the years (masters rowing events are age-handicapped), none considers herself a “master” in the literal sense of the word, not even Martin, who has been rowing for 28 years. Rather, they remain ever challenged by the sport. “One of the things I love about sculling is the elusive difficulty of it,” Martin says. “There is always growth.”

In her early 20s, Martin studied for three years in Japan under a master potter. It took her a long time to relinquish her Western ideas about self-expression and to surrender to the practice, to the teaching. “I learned how long it takes, and how much persistence it takes, to surrender the ego, to surrender to the craft, to achieve competence,” she notes. “That has served me well in life and in sculling.”

Matsuo Basho, the 17th century haiku poet, once wrote that in order to paint bamboo, you must first look at the bamboo (create), then you become bamboo (understand), and finally you forget the bamboo (assimilate). Martin recalls her pottery sensei saying that each stage takes roughly 20 years, so she reckons she still has a long way to go.

“I should be so lucky to become the boat and the water and the sky,” Martin says. “But I’m only in my 28th year. Check in with me in another 12.”

Teri Thomson Randall is a journalist, photographer, and filmmaker residing in Seattle. Her writing experience spans the arts and sciences, including staff writing positions at the Journal of the American Medical Association and Pasatiempo, the weekly arts magazine of the Santa Fe New Mexican. She holds graduate degrees in microbiology, science communication, and film production, and is proud to row with Green Lake Masters Crew.