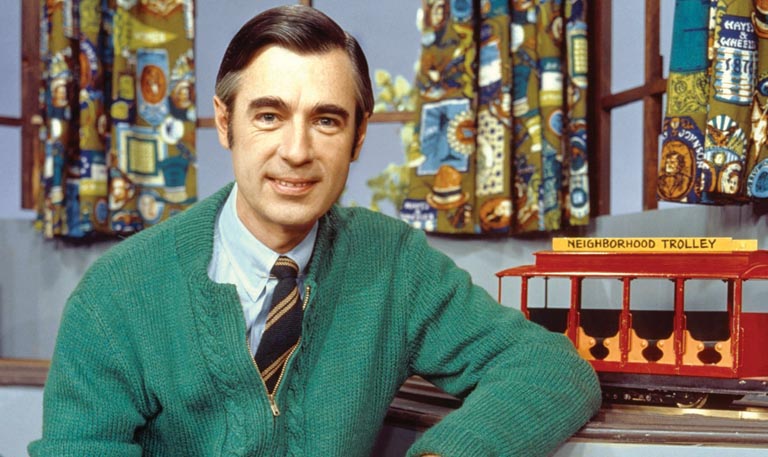 Wouldn’t it be grand if we could all live in Mister Rogers’ Neighborhood and love each other as valued neighbors?

Being with family this past holiday season reminded me of my role as a family elder. Odd as the concept seems, I am the elder male of my immediate family. What an honor. And, what a responsibility!

It struck me that, in these turbulent and unsettling times, it is critically important for me to radiate a sense of calm security and unlimited love for my family. We elders, afterall, are the foundations upon which our families are built. We—hopefully—provide the bedrock that gives our children and grandchildren the stability and security to explore, experiment, and invent vibrant lives for themselves. I need to be MisterRogers for my family.

I have always wanted to have a family just like you.

I’ve always wanted a neighborhood with friends like you.

I had the chance to meet Fred Rogers while working for PBS. He was in Washington, DC, to testify before Congress in support of ongoing funding for public television, particularly for the wonderful children’s programs. I was assigned to greet Mister Rogers at the airport and make sure he got to his hotel and then to the halls of Congress. I was thrilled to spend that time with the personification of love and kindness and will never forget the experience.

During that week, I got to watch Mister Rogers in action and observe the kind of magical spell he’d cast on everyone in his presence. In his simple and unassuming way, he radiated an aura of love that permeated the air around him. Magically, in his presence everyone became their better selves.

I suspect that Mister Rogers was a kind of wizard.

I watched him enchant a room full of PBS staffers and their toddlers who attended a special performance at the PBS headquarters. The adults, I included, sat like adoring worshipers waiting for the gentle master to begin his show. Not so the kids. They were running around and shrieking like, well, like a roomful of toddlers. It was kindergarten chaos. I felt terrible that this golden opportunity would be undermined by a failure of crowd control. I wanted to shout, “Come on parent! Get control of your kids!”

Not to worry. When Rogers was ready to begin, he stood, said a few quiet words and the kids all fell silent. It was as though he had cast a magic spell over our children. No fidgeting. No tantrums. No negotiations. No escape attempts. Just rapt attention to Mister Rogers.

I have never seen a performer work a crowd as masterfully as he did that day at PBS. The kids were entranced by his gentle tones and his loving and compassionate aura. They knew immediately that he was talking directly to them with a depth of respect and compassion that was unique and valuable.

On another occasion I got to see Mister Rogers perform his magic on a crowd of elementary school teachers. Rogers was the keynote speaker and addressed 15,000 educators in a vast auditorium. My seat in the upper tiers felt impossibly distant from the stage. Mister Rogers was a tiny, inch-tall figure behind a miniature podium.

As Rogers began to speak the murmur of 15,000 voices faded to complete silence. Every eye was focused on him. And, not long into his presentation, an amazing thing happened. I began to cry. My eyes welled with tears of . . . what? His words of love did something to release my emotional controls. I was overwhelmed with a mix of warm and fuzzy feelings that normally felt embarrassing. And I was not alone. Every member of that vast crowd was sniffling and daubing their eyes or taking deep breaths to control their sobbing. (I’m getting choked up right now, just recalling the moment.)

What was Mister Rogers doing to us?

I don’t remember the particulars of Mister Rogers’ speech. I’m sure he spoke about the importance of raising children with love and respect, and told the teachers what a valuable and important job they performed. He radiated genuine love, acceptance, and deep appreciation for all of us. Were these expressions of love and respect so rare in our experience that they caused us to weep?

Wrapped in Rogers’ embrace we cried not tears of sadness, but of release and compassion and respect for all the wonderful people who inhabited our neighborhood. We were giving and receiving unashamed love. Mister Rogers created a neighborhood of love in which we all felt valued and cherished.

As I think about my mission statements for my positive longevity, I know it will include the resolve to become more like Fred Rogers. What better way to bring meaning and purpose to my mature years? What better job for an elder than to bathe his family and friends in warm feelings of love, respect, and gratitude.