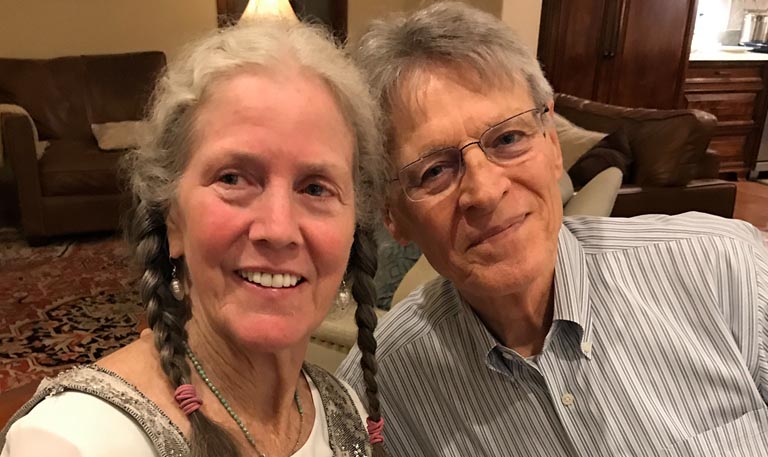 When my wife was diagnosed with Alzheimer’s in 2013, almost everything I read painted a bleak picture of our life together with ever-increasing losses.

I decided to focus on what Nell could do, and create joy, positivity, and shared moment-by-moment connections so she would never feel alone with her illness. I varied my approach from understanding to distraction, to physical activity. When she’d say, “I feel lost,” I’d join her in understanding the feeling,” and say, “Me too, I’m so glad we’re together.”

When she was confused, I’d guide her to activities that would remind her of who she was by playing her favorite music. We would sing along to Leonard Cohen, Simon & Garfunkel, Peter, Paul and Mary, and The Beatles. Nell used to imitate Janis Joplin singing “Mercedes Benz,” so she’d laugh as she sang it again. The music helped her remember who she was.

My worst moments came when she became aware she was losing her sense of self.

“I don’t know who I am anymore,” she would wail, amid tears of utter despair.

I’d attempt to transform her fear into physical activity.

“We need to change our scene. Let’s go for a walk,” I’d say. I knew seeing nature’s beauty calmed her. She also delighted in watching small children play.

We shared difficult as well as funny moments. I noticed evening agitation and occasional hallucinations. Her neurologist diagnosed the symptoms as Sundowner Syndrome and prescribed medication. After three days, her agitation got worse so we discontinued it. This was my first disease-specific learning that any mood-stabilizing medications paradoxically increased her agitation.

There was another side effect of the medication. On the morning of the fourth day, I came out of the bathroom and asked her if she’d like breakfast.

“What’s happening?” I asked, as I backed away. “We have never hit in our family.”

She took steps toward me and started hitting me again.

I left and stood outside the front door for about seven minutes. I was afraid she might wander, so I guarded the door from the outside. When I came in, I asked, “Would you like eggs for breakfast?”

“You know hitting is not acceptable. It hurt my feelings,” I told her.

“Well, you’re the one who brought it up. I’ve forgotten about it,” Nell replied.

I laughed aloud at the lesson I just learned. The person with an intact memory is the one holding on to a grievance, while the person with Alzheimer’s has moved on. After that, the ability to laugh alone—and together—carried us through many difficult circumstances.

I took care of her in our home for six years. As her symptoms worsened, I developed angina. I moved her to an Alzheimer’s care facility for the last seven months of her life. I spent every noon and evening meal with her. When she developed chewing and swallowing problems, I fed her pureed food.

As she lost her ability to speak, we stayed connected through head nods and yes/no questions. I knew she was still with me. Then the head nods became miniaturized movements. Then nothing.

I was determined not to let her slip away, so I took her hands in mine, looked into her eyes, and talked to her about news from her children, sisters, and grandsons. She seemed to relax when I did this, and I felt connected to her. I’m not sure whether she comprehended my words or just found the sound of my voice comforting.

After that connection stopped, I used my last strategy. I held her hands, looked into her eyes, and began breathing in synchrony with her. At this point, she had no voice, no facial expressions, no head nods. But I was determined to “find Nell.” And I did. After a few minutes, she’d lean forward. I’d feel our connection return and nod my head yes. That connection continued until she died.

There was one other significant event. Two days before she died, while I was feeding her, she stopped and locked eyes with me and held it for about 45 seconds. There was such intensity to her gaze I knew she was trying to communicate something. I met her gaze and after a few seconds, nodded my head.

“Yes, I understand,” I said. “Thank you for telling me. I love you, too.” I realized eye contact was her only way to initiate communication. And she used it. I stayed locked into her eyes until she broke it off.

She died two days later, on Thanksgiving in 2019. Staying connected with her throughout her illness was the greatest blessing of my life.

Douglas Huenergardt has a Ph.D. in Communication Studies from Northwestern University. He became a licensed marriage and family therapist and later taught in the Marriage and Family Therapy doctoral program at Loma Linda University from 2000 until he retired in 2018 to care for his wife full time.