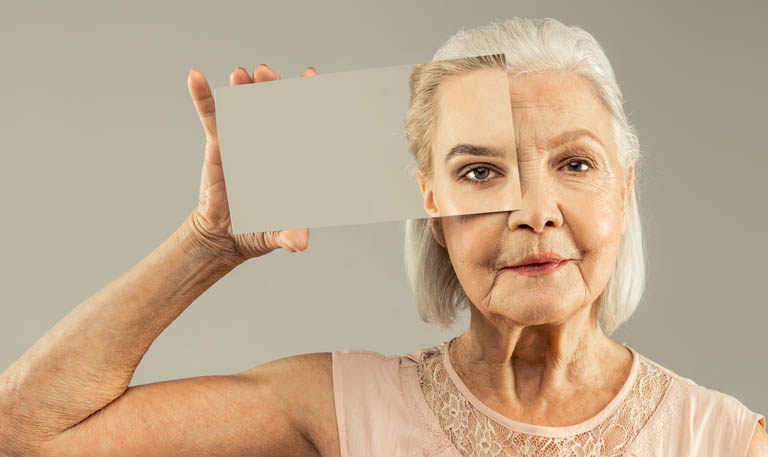 In 1965, a group of 13-year-old white girls sat in a Home Economics class, ready to learn the secrets of personal care. The day before, as a prelude, our teacher had shared an amusing story of her father calling her his little quarter-ton. Today we would find out how to wash our hair, wear the right clothes, and maybe get some cosmetic advice.

Waiting for Miss Fraser to arrive and share more real-world math problems about weight, I read a magazine article describing how important it was—once you were suitably married, of course—to leave your make-up on while you slept. After all, said the writer, “you wouldn’t want him to wake up and see you without it.” Yikes. To this day, I can hardly go out of the house without at least some eyeliner and mascara.

We can throw blame at the multibillion-dollar cosmetic and skin care industries, but standards for female beauty began long before facelifts and mass marketing existed. For centuries, youth and beauty were paramount to a woman’s success in the world. Catch a man’s attention, marry, make a home, have babies. There were very few other options. The beginning of modern era marketing messages simply jumped on that reality and magnified it on a mass scale.

Those of us over 60 grew up with advertising that wasn’t even slightly subtle about it. One of my gag-worthy favorites, for toothpaste, showed an attractive woman building a spider web. The caption read: “There’s another woman waiting for every man—and she’s too smart to have ‘morning mouth.’” Let the competition begin!

As women began to take their rightful place in the world, we continued to be indoctrinated into a cultural belief that how we look is what we’re worth. In fairytales, the youngest, prettiest, sweetest girl always wins over the older, uglier (less youthful), meaner (more assertive) sisters/stepmothers/queens. Entering the real-life workplace, we continued to compete instead of collaborating with each other.

Author and activist Ashton Applewhite puts it this way: “Society’s obsession with the way women look is less about beauty than about obedience to a punishing standard—and power. When women compete to ‘stay young,’ we collude in our own disempowerment. When we rank other women by age, we reinforce ageism, sexism, and patriarchy.”

Brandy Sebron-Kelley was born in Kansas in 1940. “One of the most terrifying things that happens as you age, especially as a woman, is that you are judged differently,” she says. “I went to the store and bought some new eyeshadow; I’d decided to wear makeup again. Then I wondered about it. I’m not trying to be 16.”

At a very young age, Sebron-Kelley had learned what white people expected of Black girls, and how to play a role to be safe and successful. Being pretty and speaking carefully were essential.

“My first teacher talked to me about how to be a lady. Little bows in your hair, how to be nice, how to speak to people. You were taught that you had to be better than anybody else in order to get what you deserved,” she says. “But you had to be careful or you’d be told you were trying to act like a white person.”

When Sebron-Kelley was in third grade, a new elementary school—for white kids only—opened near her home in South Park, Kansas. At eight years old, she was chosen to testify in a desegregation lawsuit. She was a tiny girl with a big white bow on her head, surrounded by adults.

“I ended up going to the white school. We were bullied. It was so scary, sometimes you’d go to church and talk about how to save yourself from lynching,” she remembers.

Sebron-Kelley was not only brave, she was also an A student who played classical music on the piano. That made her an anomaly to white men, and she quickly learned how to make that work for her as she went out into the world.

“One of the most educational periods in my life was when I was hanging out with gay men in San Francisco,” she says. In her late 20s at the time, she helped others to put on an act of their own. “I was dressed in a fabulous outfit by a gay executive so I could be his beard at a big corporate event. I did it for his friends, too. They respected me, and it gave me confidence.”

So what happens when young women get older? How do we change the internal narrative—put there by ageist messaging—that we are no longer as interesting, attractive, or relevant?

“Start with yourself,” says Applewhite. “All change starts within. We can’t challenge bias unless we’re aware of it. Look at your own attitudes toward age and aging. The minute you see a prejudice in yourself, then you start to see it around you.”

Pay attention to your moments of unconscious bias, too. For example, it’s really not a compliment to say, “You look great for your age!” Think what you’re saying and stop at “great”.

Verona Ryan, turning 90 this year, embraces being older. “If you like who you are, that’s part of being happy. What makes you happy makes you beautiful; it will show on the outside. Stay on top of things so you know what’s happening with your body and what’s going on out there in the world.”

Ryan was a runner-up for Sweetheart of Sigma Chi in her college days. As a young wife and mother, she read “ladies’ magazines” full of articles telling readers how to look and what to do. “Everything that was written in those magazines was more or less taken as gospel,” she says.

Today, Ryan says, “There’s nothing wrong with wanting to look good, but it’s the attitude you have about it. Don’t feel like a failure if you don’t measure up to a standard that someone else has set. I immediately think they’re just wanting to make money when they advertise that we should look a certain way.”

When women broaden their friendships to include mixed ages, says Applewhite, it’s powerful to talk about the forces that are lined up against us that want us to compete, to judge each other.

“Older women can remember what it’s like to be young, and how hard it is,” Applewhite says. “And younger women can realize how much of our youth we squander in worrying about losing it.”

Sebron-Kelley recently celebrated her 82nd birthday wearing sparkling blue nail polish and a lot of jewelry. “Adorn yourself in ways that make you happy,” she says. “Accept that you’re in another dynamic age group.”

Then, as she was leaving for that day’s adventure, she adds, “I’ve been an ‘actress’ all my life, but the part that’s real is this arrogant, intellectual, crazy, wild, humorous woman who’s in her ‘80s and isn’t ready to die yet. I want to live to be 100.”