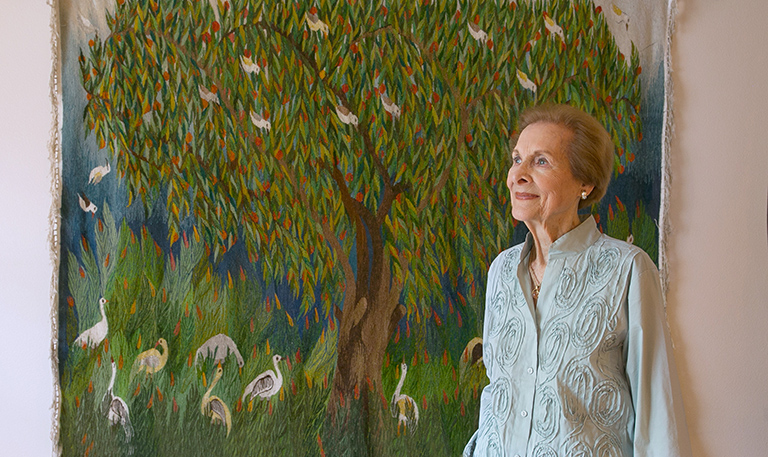 Looking back on a lifetime of achievements, Dee Dickinson can easily name her most important early influences. Her mother was one, of course, and so was Marjorie Livengood, her teacher (and later principal) at the Bush School in Seattle.

“I think she understood my abilities better than I did,” she says. Livengood would often “put me on a high dive and ask me to jump.” More often than not, Dickinson took the dare—and at 88, this education innovator has dived into dozens of major projects that she never dreamed she would and found great depths of success along the way.

Aside from good mentors, Dickinson’s journey is animated by a strong spirit of curiosity. Her interests are wide: the arts, theater, languages, literature, new concepts in education and learning, technology, and innovation. And now, later in life, this Seattle resident is exploring how to keep well in old age.

“I was thinking about how the large tapestry that hangs in my apartment, called The Tree of Life, is such an apt symbol of my own life,” she shares. “I continue to learn and grow, and feel in touch with higher powers of light, love, and energy that seem to provide what I need in unexpected ways. Like my Tree of Life, I feel deeply rooted and connected to the people I love and the organizations I belong to and support.”

Dickinson began her career in the 1950s, when she taught school at Bush. With Livengood’s encouragement, she incorporated the arts and creative dramatics into everything she taught. It was fun for her—and for her students.

But it also was a time of severe cuts to arts programs in the public schools. In 1953, Dickinson was invited to join the Junior League of Seattle and was asked to direct the Seattle Creative Activities Center, an after-school program for children. Later, she also directed the Junior League’s Children’s Theater, touring housing projects in Seattle.

In 1959, she began the Junior League’s Northwest Art Project that, with trained docents, toured the public schools with original works of art by great Northwest artists. “We began with seven major paintings,” she says, and “the collection has now grown to 75 works of art in a variety of medias. Last year we reached over 25,000 children and teachers in 39 schools with 50 trained docents.”

Dickinson has always been especially passionate about finding new ways to teach and help students learn. In the late 1970s, after retiring from teaching, she was asked to chair an advisory board to make recommendations on how to raise academic achievements in the Seattle Public Schools. It was a time of breakthroughs in new research from the neurosciences, the cognitive sciences, studies in human development, and accelerated techniques involving the arts.

To reach more teachers and school administrators, Dickinson and two colleagues founded New Horizons for Learning, a Seattle nonprofit educational network. They began with small workshops and published a newsletter that, by the second year, had a national circulation. (By the third year, it had gone global.) Next came larger workshops at the Seattle Center, then international conferences on transforming educational systems locally and nationally. New Horizons had found its role: giving visibility to effective teaching and learning practices and ideas that have not yet reached the mainstream.

By the early ’90s, the Internet was emerging. One day, as Dickinson and her colleagues were trying to figure out how to further broaden their audience, two fellows from Seattle software company Aldus called, offering to help turn New Horizons’ database of learning innovations into a website. When Dickinson retired in 2006, the New Horizons for Learning website was receiving 9 million hits a month. It’s now hosted by Johns Hopkins University, where it continues to grow and develop with new technologies.

Dickinson’s husband, a psychiatrist and psychoanalyst, died nine years ago. She remains close to her three children and two grandchildren and sees them often. “They are all explorers and innovators and have traveled extensively in their work and recreation,” she says. “All of us together plan how we can best contribute to and support the environment, education, and other important causes.”

Two years after her husband died, Dickinson moved into Mirabella Seattle, a retirement residence they had chosen before it was built, and where the Tree of Life now hangs. She loves being able to spend her older years living among interesting, friendly people, as well as enjoying numerous kinds of physical exercise and activities, and nutritious, healthy food. She serves as a volunteer, and every Sunday afternoon she teaches French to a young student.

“As I grow older, life continues to become more interesting and I want to keep healthy to enjoy it,” she says. And ever the teacher, she also wants to share what she’s learned, so she wrote an excellent booklet, Options of Wellness, with information on how to keep healthy mentally, physically, emotionally, vocationally, and socially.

As she writes in its pages, “The French hold an inspiring view of our time of life. They think of le troisieme age as a period of full flowering years built on a lifetime of experience that may have led to our making wiser decisions, dealing better with complexity, giving back to society from what we have gleaned, and in the process maintaining greater equanimity and a keen sense of humor.”

Dee Dickinson understands deeply the wisdom of a little Chinese aphorism that goes, “Everything changes, everything is connected, pay attention.” And she’s doing just that as her own tree of life continues to branch out toward new horizons and new adventures.

Liz Taylor, an eldercare specialist for 40 years, lives in the San Juan Islands, where she is semi-retired. She wrote a popular column on aging for The Seattle Times for 14 years, and has consulted with thousands of older adults and their families. Liz can be reached at lizt@agingdeliberately.com.