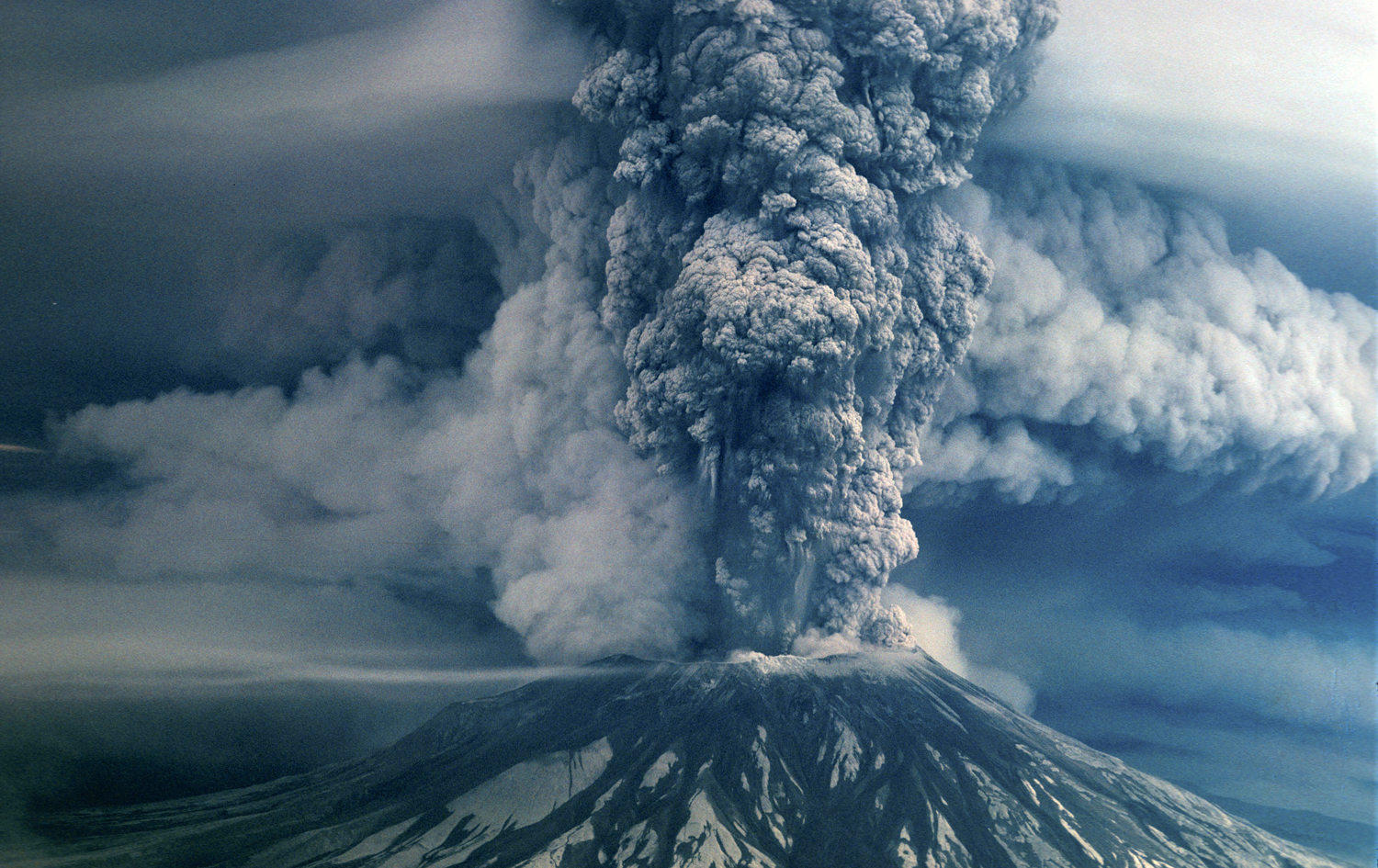 It was our first camping experience and I never expected something so spectacular would forever become etched in my memory, at that very time, that very day when all hell broke loose…Sunday, May 18, 1980, 8:32 a.m!

My husband, Don, and I were camping 18 miles north of Mount Saint Helens.  Instead of pitching a tent, we slept in the van with our tri-color collie, Gala.  Since I needed to make an early morning dash to the bathroom, I quietly opened the door, only disturbing our excessively agitated dog, who insisted on escorting me.

When I looked at the ground covered with ash, it seemed strange that everyone in the campground would be cooking bacon and eggs all at the same time.

I raced back to the van where Gala arrived first, shaking and pawing desperately at the door.

Eerily, we heard no boom nor felt shaking of the ground… nothing that signaled an eruption!

As word spread, campers quickly packed their belongings and drove out of the campground.  We joined the parade of RVs and cars, allowing ample room between us and the vehicle in front which stirred up fine grey ash onto our windshield.  We stopped once to wipe the van of ash and looked around at others dusting at least two inches from their cars.  I thought what do we do now?  Where do we go?

Heading west, we found a clearing on a knoll along the Cowlitz River.  The knoll, located approximately 20 miles north-west of St. Helens, with an obstructed view of the mountain, felt like a protected area where we could catch our breath.  Several people coming from our campground spread blankets and unloaded drink- and food-filled coolers.  Under a sun-lit blue sky, an uncanny party-like atmosphere ensued.  Conversations centered around the erupting volcano earlier in the day, but we didn’t see any activity, ash or damage from this vantage point. There was nothing to indicate a major volcanic eruption had occurred; however, I was curious to see a large number of helicopters fly overhead in the direction of the mountain.

At 4:30 p.m., I froze.  A plume of ash and smoke mushroomed 40,000 feet into the sky…an erupting volcano in front of my eyes, something I’d only read about in my New York City high school Earth Science class!  Everyone gasped and pointed towards the mountain, as bolts of lightning streaked through the cloud.  Cameras clicked.  It appeared no one on that hill feared this volcanic eruption and continued to pose for that historic photo op featuring a grey-, white- and dusty-colored plume rising in the background.  Feeling no immediate threat to our lives, we stayed another two hours before deciding it was time to head home to Kirkland to beat weekend traffic.

We didn’t fully understand what had happened at 8:32 a.m. until we turned on the van radio.  My casual attitude abruptly changed to horror, as news reported the side of Mt. St. Helens blew out, following a 5.1 earthquake underneath.  The top of the mountain disappeared.  We drove in silence, glued to ongoing reports, hearing about the destruction and deaths the eruption caused, lakes, glaciers, trees destroyed and wildlife mowed down by the blast.  That wasn’t all.

What was initially a perfect weekend for our first camping trip and a history-making photo op for us on the knoll that day, became a nightmare for those closest and to the east of Mt. St. Helens.  The guilt from enjoying the spectacular scene at 4:30 p.m., later learning of lives lost and seeing photographs of monumental devastation, brought an overwhelming sadness.

Forty years later, I still think of hikers, campers, geologists, photographers, and resident Harry Truman who lost their lives May 18, 1980.  I will be forever humbled by nature’s power.