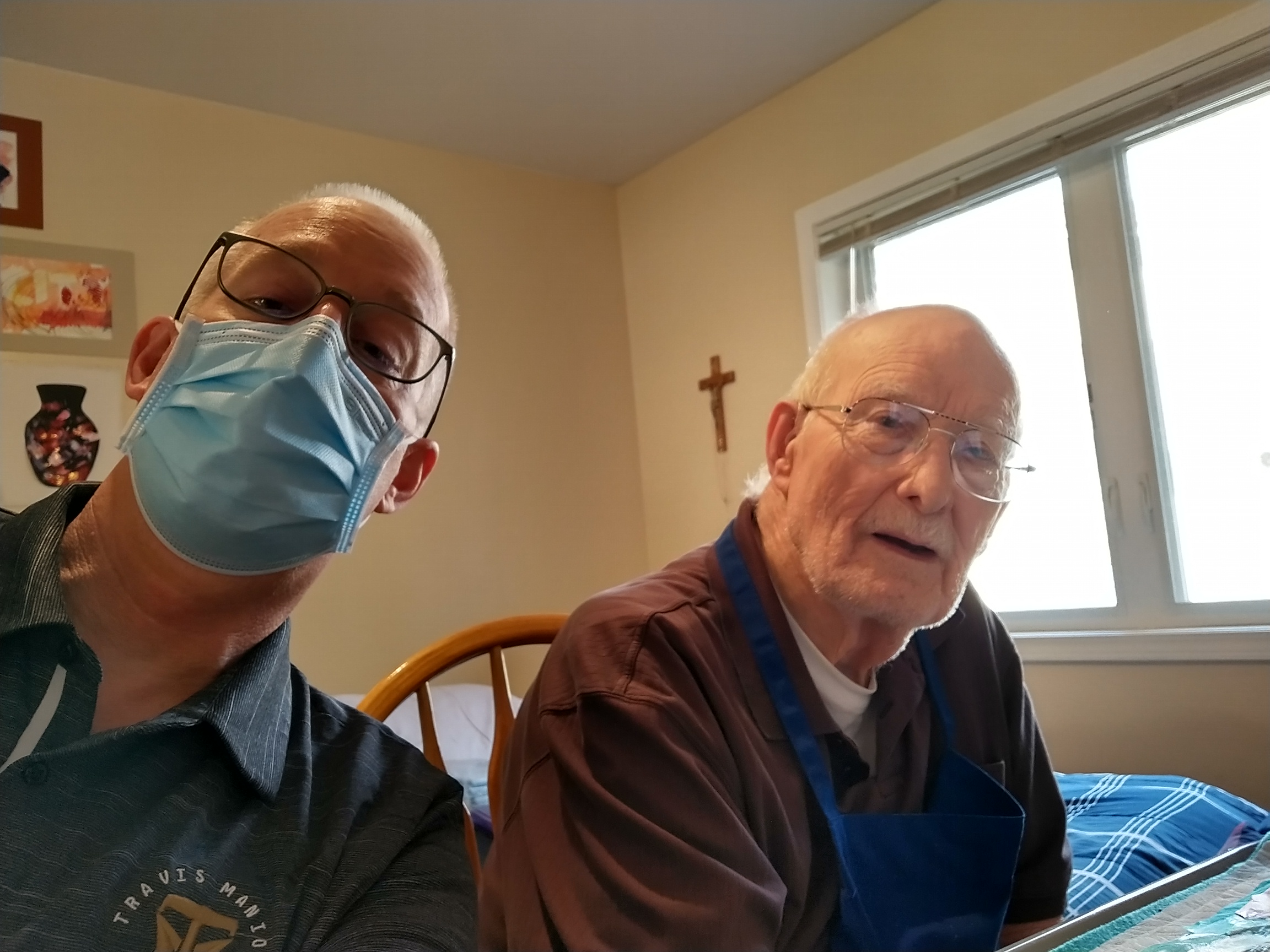 Over months of participation in Opening Minds through Art (OMA), Gene Hochwalt has become more engaged during the sessions. Gene, who is 90 years old, was diagnosed with dementia about 10 years ago. His son Joe participates in the art sessions alongside his dad. He also helps fill in the colorful details of his father’s life journey.

Gene joined the United States Air Force in 1949 and served a total of 23 years. One of his talents was for graphic design, which he made a career of, both in and out of uniform. In the military, he lettered aircraft, designed squadron patches and made posters used in briefings – long before PowerPoint was invented.

Gene, his wife Phyllis, and their family moved several times in his career. While based in the Northwest, he left active duty for three years and served in the Air Force Reserves while working for The Bon Marche. But the draw of the military lifestyle was strong, so Gene returned to active duty before retiring in 1972 in the Hampton, Virginia area.

There, he worked for a small sign shop that served several real estate agencies and developers. In 1972, Gene seized an opportunity to move back to the Northwest and work for The Bon. He lettered windows at the downtown store; and designed and produced silk-screened signs used in all the company’s stores.

When Gene finally retired for good, he didn’t stay idle. He continued to pursue graphic art on computers. In his 60s, he began to lose his vision and hearing and eventually his short-term memory – but that hardly slowed him down.

Gene and Phyllis moved to an Adult Family Home near their son Joe in the Tacoma area. Phyllis died in March 2021, after 70 years of marriage. Before long, Joe saw a Facebook post about OMA and felt it would be a good activity for his dad.

At first it was difficult for Gene to accept the concept of abstract art, but as time went on, he became more engaged.

“Nudges were needed to get dad to participate fully,” Joe said, “but OMA challenges him to think.”

Now Gene is able to make the association between his past artistic work and the different weekly OMA activities.  Currently, Gene is in his fifth six-week session held virtually.

Gene loves to work with a paintbrush, a reminder of what he did before, though he still tends to be more linear than abstract and is slowly coming to terms with his creation not looking like a recognizable image.

Joe enjoys participating in OMA with his dad and has noticed Gene is always in a better mood after a session. They have even painted together outside of the sessions.

One of the many things Joe says his dad enjoys is the art show that happens after each six-week session. It showcases the work of all participants – people living with dementia or other cognitive challenges. Family and friends are invited to view the artwork. Gene enjoys seeing people virtually whom he doesn’t get to see often, including family from as far away as Ohio where he was born.

When asked what he wants others to know about the value of OMA for a person living with dementia, Joe says: “if you can fit it in, do it.” For him, it’s an activity that bonds father and son without struggling to find talking points during their visit. The return to something that reminds Gene of his past, including his childhood art, has enriched both their lives. As Joe says, this is “a slice of normal” and gives them positive interaction with other artists. And conversations are much more comfortable.

Gene and Joe are excited to continue participating in Opening Minds through Art. The six-week virtual sessions are free, and materials are provided. For more information, contact Dementia Services at Lutheran Community Services Northwest at 253-272-8433 or dementiaservices@lcsnw.org.