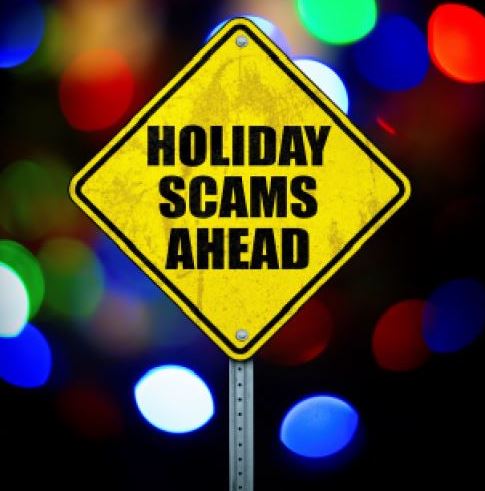 Washington State – Consumer fraud schemes escalate each year during the holidays, and a new research report, “Seasons Cheatings,” from the AARP Fraud Watch Network finds that a significant number of Washington State adults are at risk of becoming victimized by common seasonal scams. About one-in-five (19%) of those surveyed failed a quiz designed to test their ability to recognize the red flags of holiday scams.

“The holidays are here, but unfortunately so are the con-artists looking for opportunities to spoil your celebrations,” said AARP Communications Director Jason Erskine. “They are more than willing to use the joyous mood to get into your wallet. But with a little preparation and vigilance, you can cut down on the threat of becoming a scam victim.”

An AARP Fraud Watch Network campaign is using advertising, social media postings, website content,webinars, tele-town halls and email alerts to warn consumers about some of the most prevalent holiday scams:

During the holiday season, many outstanding charities solicit donations to support their important work.  Unfortunately, scammers will try to get in on the action to line their own pockets.  About one-third (31%) of those AARP surveyed said they have received a request for a donation from a group that was likely fraudulent.

Before making a donation, experts recommend using charity-rating sites such as Give.org orCharityNavigator.org to make sure the solicitation is from a legitimate organization.  Also check with the Secretary of State’s Office at www.sos.wa.gov/givesmart or by calling 1-800-332-4483 to make sure the charity is registered with the state.  AARP’s survey showed that 35% of Washington adults do not conduct any research on charities before making a donation.

Consumers should also ask how much of the money they give goes to the charitable purpose and how much goes to the cost of fundraising.  Commercial fundraisers, which can range from telemarketers to mail distributors, collect money on behalf of a variety of groups, like shelters and aid programs.  According to reports from the Secretary of State’s Office, the cut these fundraisers keep and the amount they return to charity can vary widely, from 100 percent to nothing at all.

Finally, consider developing your own “charitable giving plan” – a set of charities you select each year after investigating them thoroughly.  Decide how much and to whom you will give each year as part of your plan and then the rest of the year when other charities call or write, simply say “no thank you.”  This strategy allows you to know where your money is going and to avoid being drawn in by a phony emotional appeal.

AARP’s survey shows most Washington adults (70%) plan on buying gift cards during the holiday season. However, consumers should be careful on where and how they purchase cards. One-in-five of us have given and/or received a gift card that had no funds on it, some of which may be the result of fraud. Thieves can hit store gift card racks, scan the numbers off the cards, then check online or call the toll-free number to see if someone has bought and activated the cards. As soon as a card is active, the scammers drain the funds. By the time your gift recipient tries to use the card, the money is long gone.

Nearly 1-in-10 Washington adults have also been asked to purchase gift cards to pay money owed to a government authority – which is ALWAYS A SCAM.  And unfortunately, over half of those who received such a request (56%) went through with the transaction and bought a gift card.

Also, use gift cards only as gifts for people you know.  Never use them for payments you’re told you owe – it’s almost always a scam.

AARP’s survey indicates that half of us (50%) who ship holiday packages don’t request a signature on delivery. When packages are left at front doors, it is a golden (and easy) opportunity for “porch pirates” to grab them.

If requesting a delivery signature is not an option, AARP advises that you explore options offered by shipping companies that allow recipients to pick up their packages from a secure location.  Or, direct the delivery company to place packages somewhere that makes them harder to see from the street.  AARP’s survey showed that only a quarter (26%) of Washington adults provide shipping companies with any specific directions on where to leave packages.

For more tips on avoiding holiday scams, visit AARP’s website at www.aarp.org/fraudwatchnetwork.  More information about AARP’s survey can be found at www.aarp.org/SeasonsCheatings.

Online survey via NORC’s AmeriSpeak® Panel, a probability-based panel with sample targeting U.S. adults ages 18 and older.  AmeriSpeak is designed to be representative of the U.S. household population.  Qualifications: Ages 18 or older; goes online or accesses the Internet (e.g., sending or receiving email).  Sample: NORC’s AmeriSpeak® Panel, n=2,842 adults ages 18 and over nationally, and 893 Washington State adults age 18 and over.  Interviewing Dates: Nov. 4-15, 2019.  Weighting: Sample were weighted to the population by age, gender, race/ethnicity, and Census division.  Margin of error: 2.47 percentage points at the 95% confidence level among all adults nationally, and 4.11 percentage points at the 95% confidence level among Washington adults