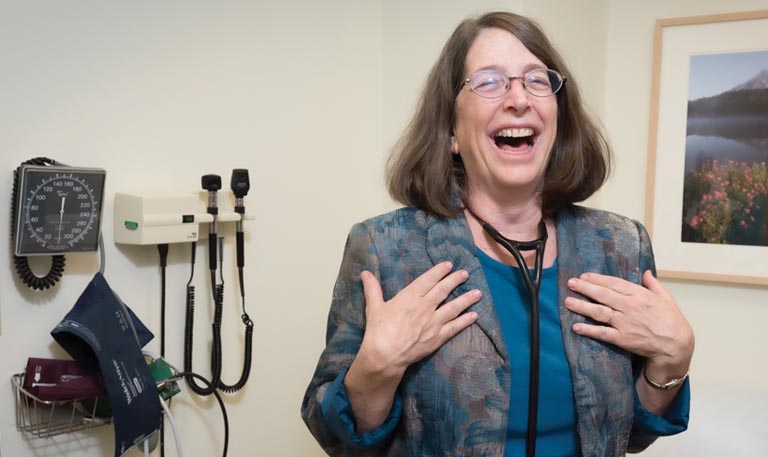 Northwestern winters aren’t easy. Last fall, as the days relentlessly grew shorter, I got my flu shot, sure—but I also felt compelled to inoculate myself with some booster shots of fun. That’s how I found myself flat on my back with about 10 other people, eyes closed, laughing non-stop for five minutes near the close of a Saturday morning session with the Green Lake Laughter Yoga Meetup. Cackles, chortles, giggles, and guffaws rang out as waves of levity rolled across the Seattle park.

And it was. After an hour of laughter, my breathing seemed deeper. My hunched-up shoulders relaxed a little. Best of all, the beauty of the autumn day seemed just a bit sweeter, making a memory I’ll be able to conjure in deepest January when spring is still a long way off. (Our leader Jessica warned us that “residual joy” was a likely side effect, along with the aerobic workout we’d just done merely by laughing.)

It all felt great in the moment. But seriously: Can I really laugh off the little rebellions my body is mounting, never mind the angst I feel over election-year politics and climate change? Does laughter truly make a difference as we age?

Dr. Carrie Horwitch is a believer. “I think laughter, in a sense, normalizes the abnormal,” says Horwitch, an internist at Virginia Mason Medical Center in Seattle. “It makes us feel connected and more in tune and in control of situations where we don’t have a lot of control.”

For Horwitch, learning she had ovarian cancer was such a situation. As she recounts in her book The Death of My Uterus and Other Humorous Events, she realized early in her recovery that humor would help her heal. Hospitalization and illness bring a lot of indignities, but even harrowing experiences can be amusing when we choose to view them that way—and Horwitch did, writing limericks to make light of her plight. Delving deeper into laughter for healing, she learned how laughter clubs—which use guided exercises to induce contagious, mirthful laughter—were taking off in India. She became a certified laughter leader and started using the techniques with patients and colleagues at Virginia Mason.

“Laughter is a great exercise. It can be done by anybody,” including people with limited mobility, Horwitch notes. “You can sit and do laughter. You can stand and do laughter.” Laughter delivers oxygen to the brain and the rest of the body. It releases stress-beating endorphins, and like mindfulness, it can help people deal with chronic pain. A few years ago, Horwitch shared her findings with fellow physicians from around the region during a wellness class, leading them in 10 minutes of laughter exercises. That gave Dr. Ted Brown an idea.

“When we finished I think everyone there thought, wow, this is really cool and I feel really good,” recalls Brown, who is a neurologist with Evergreen Health Multiple Sclerosis Center in Kirkland. “And I immediately thought, ‘What about my patients?’” Brown started looking into laughter therapy and, with the support of the Evergreen Health Foundation, did a study of 30 patients with a variety of central nervous system disorders: mostly MS, but also Parkinson’s, Lou Gehrig’s disease, and other conditions.

After eight weekly classes (in groups of about eight people each) with Bellevue-based certified laughter leader Julie Plaut Warwick, Brown and his team discovered some hopeful signs in areas including fatigue, stress levels, and—checking in again eight weeks later—an overall sense of well-being. One participant found their blood pressure went up after laughter therapy, but there were no other bad side effects. Brown and his colleague Dr. Virginia Simnad presented their findings at the 2018 Consortium of Multiple Sclerosis Centers meeting in Nashville.

A few Seattle-area doctors using laughter therapy might not signal a health care revolution, but someday physicians and patients may routinely view laughter as important to well-being as a healthy diet and adequate sleep. “Everybody laughs around the world and it has the same physiologic benefits for everyone,” Horwitch notes. “You don’t have to have humor in order to laugh, but if you laugh more, you may have better humor.” Yet Horwitch adds that before she suggests laughter therapy, “I will always make sure it’s an appropriate moment for me to bring that up.”

“I prescribe it as often as I can,” says Horwitch, gleefully demonstrating the cascading hee-hee-ha-ha-ho-ho laugh she teaches to patients. “My motto is ‘laugh until it helps.’”

Brown and Horwitch agree that for maximum benefit, it helps to laugh with other people. A lunchtime laughter group open to everyone meets weekly on Tuesdays at Harborview Medical Center in Seattle, and you can find other groups on MeetUp.com. If you’re living with a chronic condition, sharing in support groups can often include stress-releasing laughter.

You can even laugh alone at home: Green Lake Laughter Yoga Meetup leader Jessica Brustad has a bunch of one-minute laughter exercise samples on her YouTube channel. (You’ll find a link under her blog at TheFunnyYogi.com. I can’t keep a straight face when I watch “Donkey Laughter.”) “If it works to watch a humorous video or movie and it makes you laugh, that’s great,” says Horwitch.

And like other forms of exercise, a little laughter can go a long way. “If you’re willing to start with five minutes a day, then start with five minutes,” says Horwitch. “If I’m driving and the traffic is bad, I’ll use laughter to relax. It works on so many levels.” Not everyone finds the same things funny, but in laughter therapy, this doesn’t matter. Doing laughter exercises doesn’t depend on being clever. “It’s laughter in and of itself,” says Brown.

Not yet convinced of the power of laughter to heal? Consider this: Improvisational comedy grew out of games that social worker Viola Spolin created to help inner-city and immigrant kids in Chicago be their own best silly selves. (Spolin later teamed with her son to create the Compass Players, which became The Second City.) Two words have always been at the heart of improv: The phrase “Yes, and …”  aims to encourage positive affirmation, whether you’re playing a theater game, doing a crazy laugh exercise, or recognizing all the messy contradictions of modern life.

In other words, we can feel sadness and anger about what’s happening in the world, and we can laugh at its absurdity. We can feel abandoned by how aging changes our bodies, and we can gently poke fun at ourselves. We can mourn the steady loss of family and friends, and we can celebrate their memories and joyfully cherish everyone who is still here. If you’re looking for a good resolution for whatever awaits us in 2020, laughing more may be worth a try.

Julie Fanselow, a frequent contributor to 3rd Act, is always ready for a good laugh. She lives in Seattle.