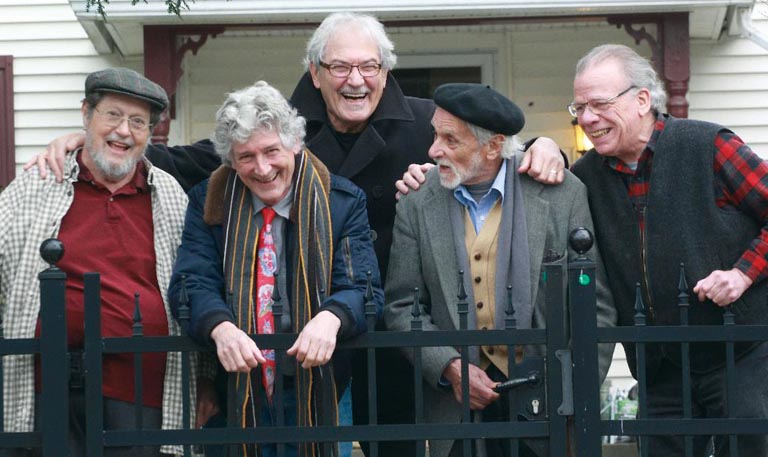 The Third Act Project, The Five Wise Guys, and Life as Improv

“The Third Act Project is dedicated to the proposition that you can be falling apart physically but that spiritual, intellectual, and creative growth is boundless. What we say is: Don’t die until you’re dead.”  Sam Bittman

From a very early age, Sam Bittman was terrified by the idea of death. In his early 60s, he decided to tackle his fear head-on—after all, it was ridiculous that he often still slept with the lights on—so he started reading everything he could find “by anybody of substance” on mortality. The result? “I became even more bedeviled by frightening thoughts of mortality than before. My sleep didn’t improve,” he says.

One of the largest generations in history is moving beyond midlife and, true to form, we’re not doing it quietly. Our exploration of old age is happening on a global level, so when I received a call from Harryet Candee, publisher of The Artful Mind in the Berkshires region of Massachusetts, wondering if I’d heard of the Third Act Project and The Five Wise Guys, I was intrigued. “Read my interview with Sam Bittman,” she told me. “You are kindred spirits.”

About the same time, my fear of aging motivated me to launch 3rd Act Magazine, on the other side of the country Bittman’s fears of aging and mortality were deepening, as I learned in Candee’s interview and in my own recent phone conversation with him. When Bittman was invited to join a group of guys to talk about what it feels like to be getting older, his first thought was “more sleepless nights ahead.” But he took the plunge, and that first men’s weekend together was transformative.

“Instead of kicking a hornet’s nest, it was like arriving in a safe house where I didn’t have to translate the language of my aging experience. Where nobody was slinging that ‘60 is the new 40’ bullshit,” Bittman says. “My deflector shields came down. There was non-stop talk, non-stop laughing, steady food, and drink to lubricate the camaraderie and goodwill among seven men. It was remarkable.”

The group met a few more times over the next year to schmooze, laugh, and explore aging in warm fellowship. No topic was off the table. “Guys want to talk about the changes in their sexual image of themselves, the insistent and terrifying ticking of time, the looming incapacities of old age and, naturally, the Big D or ‘curtains’ as we refer to it,” he recalls. On one drive home with “the glow of their gathering still alive,” Bittman wondered if they could foster this same kind of engagement for others with a website, and the idea for Third Act Project was born.

To move his idea from concept to reality, Bittman partnered with Bill Davis, a Harvard-trained psychologist, and psychotherapist (and member of their original men’s group). Together, they focused on creating an online community for men with a goal of inspiring their audience to keep going and not fall for ageist and outdated ideas about being older. At the same time, they wanted to be as entertaining as possible.

The name, Third Act Project, was inspired by much of the same thinking behind our magazine title, 3rd Act. Their website explains: “The third act of a play and of life features the climax resolution of a story and its subplots, leaving the protagonist and other characters with a new sense of who they are. Third Act Project encourages older men everywhere to be the spirited protagonist in their own stories until the final curtain.”

Bittman curates the content for the TAP website, pulling mainly from the visual and performing arts. An idea struck him: He and two friends, Matt Tannenbaum and Jeff Kent, have been taking acting classes together for years, and after class, they usually stop for dinner and “talk about everything.” One day he asked them how comfortable they would be talking about these same topics in front of a camera. With Tannenbaum and Kent enthusiastically onboard, they recruited two more friends, Bob Lohbauer and Danny Klein, “all of us actors, writers, gagsters, retailers, and fires burning,” says Bittman, and created the video series The Five Wise Guys.

The 20-minute episodes are largely unscripted and Bittman describes the show as “a group of older men ranging in age from 69 to 84 (and getting older by the minute!) who gather regularly to shoot the breeze, often with great hilarity, about what’s going on in our lives, our thoughts, our imaginations.” You can watch all of the episodes on their website at ThirdActProject.com.

“The essence of acting, which is to say, connecting with people, is listening and responding to the people who are on stage with you. It gets you asking questions, and maybe you come up with some new thoughts of your own,” Bittman says. “Life is improv. I used to think it was a sign of intellectual weakness and lack of discipline to make things up as you go along, fly by the seat of your pants as they used to say, but I love the freshness that it brings to my life and to my relationships.”

Victoria Starr Marshall is the publisher and editor of 3rd Act Magazine.