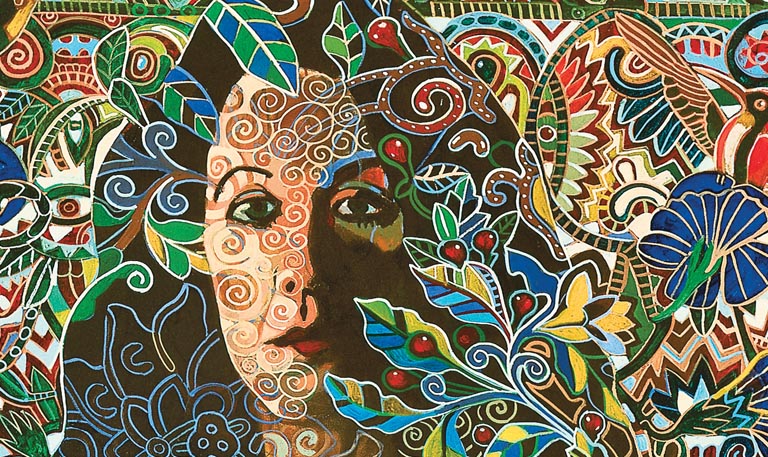 When you meet internationally acclaimed Seattle artist Alfredo Arreguin, you are immediately struck by his warmth, his enthusiasm, his generous spirit, his infectious optimism. You marvel at the energy and exuberance of this ageless bon vivant.

Arreguin infuses his sense of joy and his gratitude for the beauty of the world in his distinctive labyrinthine, revelatory paintings that engage the mysteries of the human spirit as they exalt nature in all its wonder.

He wants to “keep hope alive,” even in times of anxiety and uncertainty. “Right now, there is tremendous repression around the world,” he says. He could respond with artistic commentary about injustice, but he would rather inspire people.

Many people make blatantly political art, yet Arreguin believes “it’s nice that I’m on the other side. . . I want to inject those good feelings into the paintings.” So, rather than depict an incinerated jungle, for example, he paints the lush vegetation and teeming flora and fauna that once existed. He celebrates that past beauty, now lost.

His exhilarating art has universal appeal. “I love people from everywhere,” he says. He delights in how people of any background can identify with his art. He recalls how an American professor loved a jungle painting because it evoked Mexico, yet a man from India asked for a print for his wife because it reminded him of home.

It’s art without borders. And the art may even heal. Arreguin was told that a severely depressed woman who saw his work at the Tacoma Art Museum was so moved by his colorful, luminous paintings that she went home, immediately dug out long-untouched art supplies, and began again to make art.

Now 83, Arreguin continues to paint day and night with seemingly boundless energy, working “like a locomotive” with an “iron will,” as described in a poem by his dear friend and renowned author, Raymond Carver, who died in Port Angeles in 1988.

Each day, Arreguin joins his wife and fellow artist Susan Lytle in the basement studio of their north Seattle home. As Arreguin adds vivid color from a pile of shriveled tubes and small tins to a gridded-out work in progress, Lytle creates vibrant, realistic images of orchids and other subjects as she works from her carefully arranged palette.

Before the hours of intense painting, Arreguin begins the day with a walk, usually at Seattle’s Green Lake. It’s a special time to contemplate beauty and to find inspiration. “It’s so nice to wake up and share love for a few minutes and enjoy the grandeur and exuberance of life,” he notes. Then he takes those good feelings into his painting.

Arreguin calls his multifaceted paintings “molecular.” Critic Matthew Kangas labeled them “hallucinatory” and the visual equivalent of Latin American literary magic realism. Figures in the work—as in portraits of his muse, the renowned Mexican artist Frida Kahlo—seem to emerge and fade in intricate patterns that reveal more and more detail on close study.

Mathematicians wonder at his original designs and fractal imagery. Arreguin responds, “All of this for me is unconscious.” He says that the “resources in me shoot out without any order.”

Arreguin draws on influences from his adopted home in the Northwest—where he has lived for more than 60 years—and from his native Mexico and beyond. Rather than slavishly depict reality, he “refreshes the image” to help viewers “see a different way of expressing something that makes it much more exciting than usual.”

With special exhibits, a new book on his work, and a major retrospective at the Bainbridge Island Art Museum, 2018 was a year of extraordinary success for Arreguin.

But times were not always so good. The arc of the artist’s life provides an inspiring American story. As an immigrant from Mexico, Arreguin came to a strange land with little more than his artistic genius and his resilient spirit.

Soon after he arrived in America, he survived harsh discipline and abusive racism in the U.S. Army. After his discharge, he worked as a busboy to pay for college. He struggled in art graduate school, but finally found his niche with the encouragement of a mentor, famous figurative artist Elmer Bischoff. Even though he was acknowledged as an originator of the Pattern and Decoration art movement in the early 1970s, Arreguin sold one of his large paintings back then for just $20 and a pair of boots. He traded another painting for dental work.

His fortunes, however, gradually improved after his marriage to Susan in the mid-’70s and the birth of their daughter, Seattle artist Lesley Rialto Cruz. In the 1980s, he brought more of his Northwest surroundings into his art thanks to encouragement from Carver and his partner, poet Tess Gallagher. Carver especially loved fishing and the salmon, and Arreguin loved painting the elusive, patterned fish for him. Soon, wealthy patrons were buying Arreguin’s unique paintings that captured the majesty and mystery of the land and water around him.

Arreguin earned his bachelor’s and Master of Fine Arts degrees at the University of Washington’s College of Arts & Sciences, which named him one of 150 Timeless Alumni. His art has been exhibited throughout Europe, Mexico, and the United States, including at the Smithsonian Museum of American Art and the National Portrait Gallery. In 2017, he became only the second recipient—after Pope Francis—of the keys to his hometown of Morelia, Michoacan, Mexico, in recognition of his art that reflected the land of his birth. But one of his proudest moments was when he was described as “an American artist” at an international exhibit in France.

Now Arreguin enjoys giving back to others. He donates art to many socially responsible causes, and he has established a generous scholarship fund at the University of Washington.

“I have achieved the most important things. It’s not the fame or anything like that—but the idea that I have lived doing exactly the things that have come out of my soul and heart that somebody has been interested to look at it,” he says. “That’s success. What really matters is right now.”

Arreguin finds comfort in creating art that uplifts and inspires people of all backgrounds. “Art can unify,” he says, and he hopes that his work “will inspire other people to begin the creative process to eventually make the world better.”

Robin Lindley is a Seattle-based writer and attorney, and the features editor of the History News Network (hnn.us). Email him at robinlindley@gmail.com.