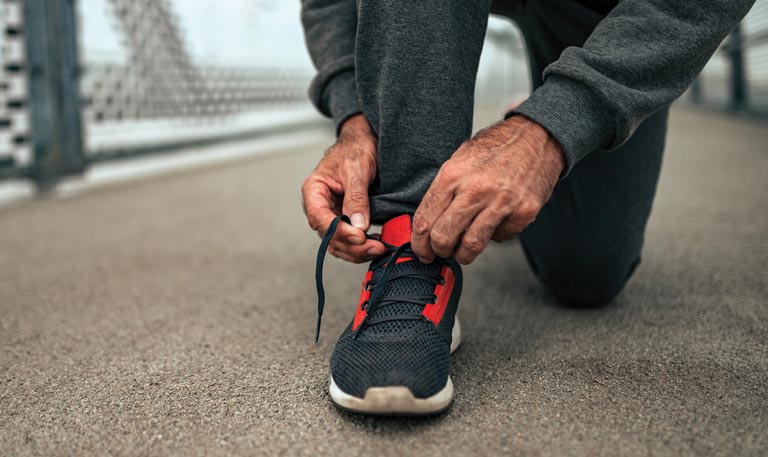 Last fall during my annual cardiology visit, the doctor glanced through a paper. “You’re 80.  You made it!” I did not know how to take his remark. It sounded like a finality statement—you crossed the finish line and you can throw in the towel. Take a break and relax. On the other hand, perhaps he was congratulating me on living past the average life span. Whatever he meant does not matter to me. Since that visit, I have added another year to my span, and I am not ready to throw in the towel. I want to keep moving as long as I am able.

“Maybe you shouldn’t be doing what you are doing at your age.” One of our 57-year-old daughters, (we have twins), admonished me on the phone. I had just come into our house after shoveling snow from our driveway, and my wife, Vivian, handed the phone to me to say hi to our daughter in Las Vegas.

“Maybe you shouldn’t do it at your age either,” I replied, half in jest, and her comment reminded me of an incident that happened 16 years earlier in Arizona when I was just 65.

One morning I jogged my daily loop around the perimeter of Sun Vista RV Resort, our winter location for some years in the Arizona desert. I had just passed the twin palms that marked my halfway point when a man walking toward me caught my attention. He stuck a scrawny arm into the air, and I stopped. He resembled many of the other male snowbirds in the park, paunchy and gray-haired. “You shouldn’t be doing that at your age.”

“You’re too old to be running.”

“Oh,” I replied. I smiled, waved, and resumed my jog. I didn’t want to spend my time chatting about what I should and should not do, especially when it related to exercise, and the sun climbing above the hills east of Yuma reminded me to finish my jog before the heat of the day. I jogged along to our park model, and after wondering how old that man thought I was, I dismissed the encounter.

Over the years, I have noticed many gray-haired runners and cyclists, who did not let advanced age curtail their activity. I observed that age had little to do with living an active lifestyle.

Jack LaLanne used to work out three hours a day until his later years when he said he slacked off some from his exercise regime. He died at 96. I had a special affinity for him when I learned that at our peak we were both five-feet, six-inches tall. There, our physical resemblance ended. With his wedge-shaped body and a 52-inch chest, he performed amazing physical feats. At 60, he swam the treacherous waters between San Francisco and Alcatraz Island—handcuffed.

Fitness gurus such as LaLanne, Charles Atlas, and Vic Tanny made no impression on me as a young man. I watched a couple of LaLanne’s television programs in the 1950s, and I sometimes read the Charles Atlas fitness ads in a comic strip format, and, of course, I heard about Vic Tanny Gyms. But I did not become interested in fitness until the early 1970s when I read Kenneth Cooper’s book, Aerobics. I began an aerobics program and experienced the benefits of regular exercise in a short time, and that sold me on the importance of physical activity.

As I ran and cycled through the years, I noticed more and more senior participants from very active to slow and steady. I admired all of them for their determination.

I went to extremes, as I tended to do with activities I deemed worthy of interest. I ran a couple of marathons and cycled the 200 miles from Seattle to Portland a few times.

I would like to do those things again, but time is precious these days, and, I have learned that exercise does not have to be extreme to be beneficial. Walking, jogging, and yard work are examples of activities good for the body and the mind.

I also learned that time spent on exercise should not cut back the time spent on more important things in life such as God, family, and work, but should be incorporated into a sensible lifestyle.

As long as I can shovel snow and jog, I will do so happily. I brush aside the comments that at my age I should not do such vigorous activities.

I say if you can move—at any age—move. When you cannot move, it is time to throw in the towel. However, don’t give up until then. I will not.

A lifelong Washington resident, Michael Soreng enjoys the outdoor life the state offers. An avid reader of nonfiction, he often writes about his construction experience and time serving in the U.S. Navy. Two of his many stories have been published, while others are destined for his forthcoming autobiography.