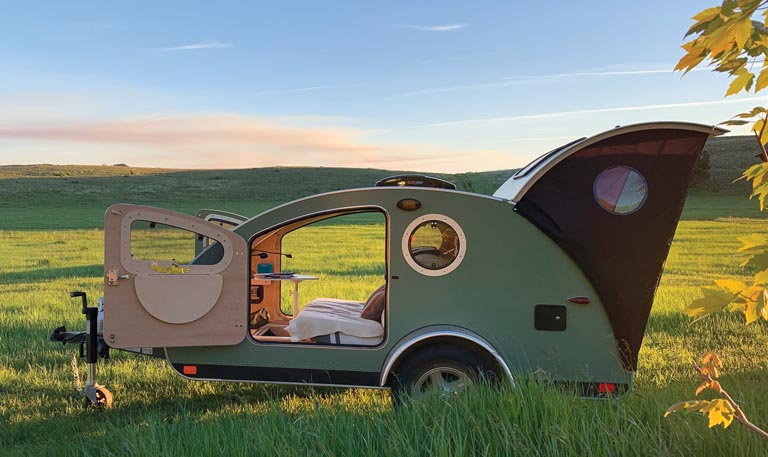 —Kenneth Grahame, from The Wind in the Willows (Chapter 2: “The Open Road”)

It was love. There were all the symptoms: heart leap, saucer eyes, quickened breath. My wife was supportive, agreeable, even. It would take a while to settle on the details, though. Such adjustments in a marriage require clear communication. Within a year, we brought Fern in.

She was not Fern at first. She was our quasi-custom built, 2,000-plus pound, sage green Vistabule teardrop trailer, crafted by a family-run RV and trailer company out of St. Paul, MN. Kitted out with all one needed: a rear galley with gas stove top, sink and running water, nine-gallon water tank, and solar panels that would allow us off-grid travel to remain secluded in or tormented by nature for up to 10 days. Most wonderfully, and one reason we chose a Vistabule, is that she featured a front-facing picture window. Her design was retro, yet her engineering up to the minute.

We would have much to learn like finding campgrounds without hook-ups, thus avoiding the near ubiquity of RV encampments, memorizing which of the six keys did what, and backing up the trailer—this, a lifelong trial. Our pre-COVID trips with Fern were a panacea, giving us stretches of simplicity, self-reliance, and the freedoms, albeit metaphoric, implicit in motion.

With some trepidation we set forth in July of 2020.What would travel feel like with COVID-19 restrictions? The usual pleasures of a romp—coffee stops in tiny frontier towns, restaurants happily discovered, serendipitous encounters, souvenirs—that used to define tootling pleasure, forbidden, now. What was left but the peculiar satisfaction of miles unspooling, and the achievement of getting “there?” Our Plague Itinerary: Iron Creek Campground in the Gifford Pinchot, Mount St. Helens, Rainier, Wash., Astoria, Ore., and South Bend, Wash.—the latter two a consequence of misfortune.

It would be the Astoria-South Bend leg that signified the tone and tenor of our pandemic trip. Along the pencil-thin Route 30, the trail blazed by Lewis and Clark toward Astoria, Sauvie Island appeared in the river on our right, reminding us of the layered histories peculiar to our region. In Astoria, after the usual electrifying search for parking, we embarked toward lunch. The tedious dance of on-again, off-again masking recommencing, we explored the town, and felt ironically confined in the outdoors.

Anticipating a straightforward 20-mile drive north to Seaview on the Long Beach Peninsula, I felt optimistic about finding a campsite while it was still light. I remembered that odd, rambling Sou’wester Lodge, and between its warrens and the ubiquitous KOAs, surely there would be a place to stable Fern. Perhaps a hot meal and a beach stroll later. Seaview’s main drag had not changed, but what had changed was the town’s bustle. It had gone from sleepy to high alert. Every conceivable accommodation swarmed with tourists. Every conceivable lot or campground up the road toward Leadbetter Point State Park was packed; the requisite Pandemic six feet mandate shrunk to six inches. Earnestly freaked by that, and the absence of options, we headed north on 101.

Willapa Bay surrounded us with sea-flattened grasses on either side. Formed when the Long Beach Peninsula partially enclosed the estuaries of several smaller rivers, it is the second-largest estuary on our coast. It features 15,000 acres of oyster beds that provide both habitats and filtering systems. The Bay’s oysters are world famous. But the wind-scrubbed vastness made dinner and sleep feel very far away. Between Chinook and South Bend, we passed only a smattering of vehicles. Dark now, with no plan, with dinner, at best, chips and a shot of bourbon, we crept toward South Bend. Adisquieting parallel—awe and peril.

There is a plethora of websites to prove the burgeoning appeal of RV travel, many dedicated to listing and locating free camping. Our app indicated a puzzling possibility in South Bend, which upon honing-in revealed itself enclosed with barricades, and further made impassable by the trench around its periphery. The town was dark and deserted.  Dispirited, we drove around, and spotting a parking lot on the river, adjacent to a café, hesitated and wondered it if was legit. At that point, it didn’t matter. The dog had to pee. I had to pee. It was 10 p.m. We parked; I squatted. I felt, as I had not for a long time, our vulnerability as travelling women.

While settling in—opening the galley for access to the sink and running water (at least we’d brush our teeth) making up the bed, pouring the whiskey—we discovered that our lot was the Robert Bush Park, and that beside Fern loomed a cement model of “The World’s Largest Oyster” inviting us to ponder South Bend’s shellfish industry. Might this bode well?

I remember the unease attending this part of our journey. Tensions hung in the air. George Floyd’s murder that May had unleashed protests and riots. Cities were burning. Swaths of forests in three states, too. Apocalyptic fires seemed a theme. Plus, it was an election year. We were in territory politically adverse. So many yard signs. So many overheard conversations. So much tangible despair.

It was less a getaway than a field trip.

The country is increasingly open now for travel. We plan a June tootle, free then, perhaps, again to indulge the wandering spirit, unencumbered by fears of yard signs and plague. But what shall we make of these past few years—our country’s divisions, the interminable pandemic, the unequal distribution of suffering, the festering legacy of race? Will ours be a before and after narrative, or a litany of dissolved illusions? Will we create a new category—Empathy Travel? Or Reverence and Reverie? Perhaps Poop-Poop. O my, O my indeed!