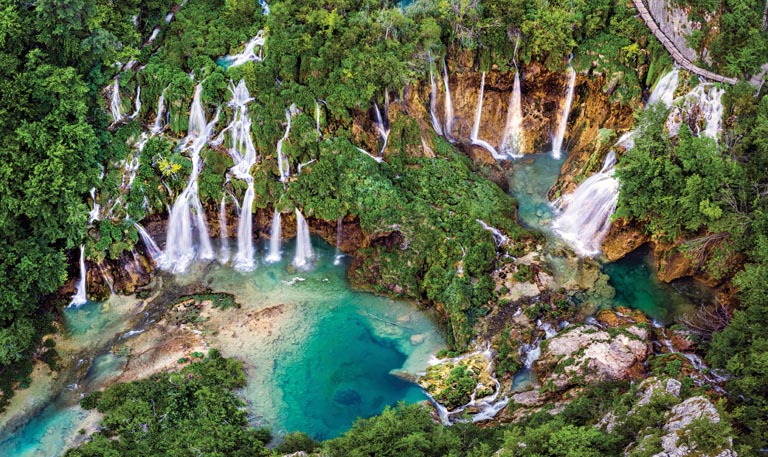 In Croatia’s rugged interior, a stone’s throw from the Bosnian border, hides one of Europe’s most exciting walks—through Plitvice Lakes National Park. There’s nothing like this lush valley of 16 terraced lakes, laced together by waterfalls and miles of pleasant planked lakeside walkways. That this park’s unique and stunning beauty isn’t universally known is yet another reminder that Europe offers endless marvels beyond its most famous sights.

On my first visit, I began at a viewpoint for a panoramic orientation. Stretching before me was a European Niagara Falls, diced and sprinkled over a heavily forested Grand Canyon. Heading down a steep zigzag path, I left cars and concrete behind, and entered a pristine world of waterfalls, lakes, and trees populated with Croatian families at play.

The boardwalk trail from here carries visitors across the middle of a lake for an up-close view of a row of gurgling waterfalls. I followed it past Šupljara Cave, the location of a German “Spaghetti Western” filmed here in the 1960s and still beloved by German tourists today.

Continuing along a path leading to more picturesque cascades, I pondered the strange juxtaposition of Plitvice’s overwhelming natural beauty with its relatively recent misfortunes. On Easter Sunday in 1991, the first shots of Croatia’s war of independence from Yugoslavia were fired in this park. The predominantly Serbian Yugoslav army occupied Plitvice and the surrounding region until 1995, and most of the Croatians you’ll meet here now were evacuated to live near the coastline as refugees during the war.

Today there’s not a hint of the war and the park is again a popular tourist destination. On a busy day, the park welcomes more than 14,000 visitors, mostly Croatians and other Europeans. Most Americans, meanwhile, are still oblivious to Plitvice’s charms.

Silent, pollution-free electric boats shuttle hikers across the park’s biggest lake. While waiting for the boat, I chatted with some industrious grandmas who sell strudel and wheels of homemade cheese with the sophistication of a kid at a lemonade stand. A face-to-face encounter with hardworking, yet happy, Croatians will make anyone deeply thankful this corner of Europe is finally enjoying peace, prosperity, freedom, and stability.

At the far side of the lake, more boardwalks lead to the most spectacular stretch of the trail—a wonderland of sleepy trout, Monet greenery, and frisky falls. There are a million ways to catch tiny rainbows in the mist as boardwalks wind around and above the bridal fair of lacy waterfalls. The lazy trout seem to understand that fishing is forbidden—they’re huge, plentiful, and oblivious to the many visitors. As I strolled, I watched for the park’s fabled wildlife. It boasts deer, wolves, wildcats, lynx, wild boar, voles, otters, and more than 160 species of birds. But on this visit, apart from the throngs of trout, I found only mice. Plitvice is also home to about 50 highly endangered European brown bears, but they have the good sense to stay far from the hiking paths.

A geologist would be less disappointed. This fantasy world of lakes separated by natural limestone dams, constantly built up by deposits of calcium carbonate, even as they’re eroded by the flow of water, is a perfect storm of unique geological features you’ll rarely find elsewhere on earth.

The park is on most Croatia bus-tour itineraries. It’s possible to get there by public bus (two hours from Zagreb, departing several times each day), but is much easier by car. Because the park is so well-organized for an efficient visit, most visitors find that a few hours to hike the trails is plenty. I recommend arriving in the evening when crowds have thinned, spending the night, then hiking right after breakfast—then move on after lunch. If the park’s three hotels feel like they were built for big tour groups during the communist era it’s because they were. To save money and enjoy a more intimate experience, try one of the many sobe (rooms in a private home, like B&Bs) dotting the countryside around the park.

After a few hours of strolling the Plitvice boardwalks, drop by the rustic park restaurant, with its heavy-timber beams, open wood-fired grill, and tall-hatted Croatian chefs serving up some of those trout that have been grinning at you all morning. Sit back and count yourself lucky to be among the relatively few overseas visitors to have enjoyed this extraordinary spot.

Rick Steves (www.ricksteves.com) writes European guidebooks, hosts travel shows on public TV and radio, and organizes European tours. You can email Rick at rick@ricksteves.com and follow his blog on Facebook.