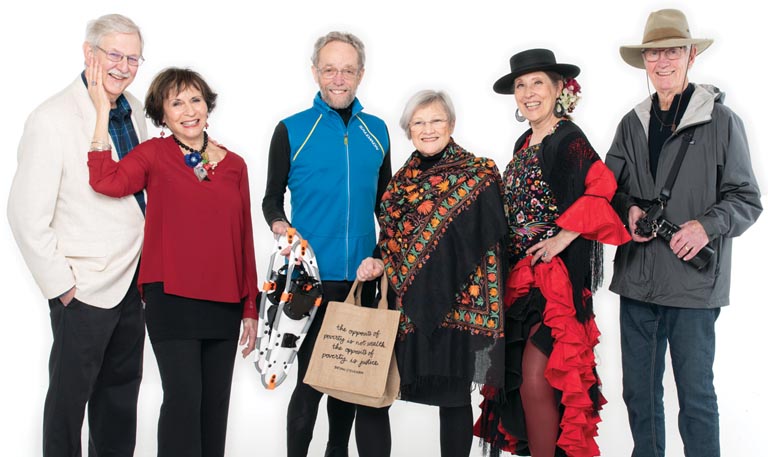 Robert Frost once wrote, “The afternoon knows what the morning never suspected.” Despite building skills throughout our lives, many of us don’t realize our true calling until we hit our later years. Gifted with perspective and clarity about what we value, we can finally give ourselves permission to abandon what’s been holding us back and try on new roles. The research on aging confirms that a late-life reboot is a good move. Older adults live longer when we feel worthy and happy; when we think of our lives and skillsets as improving instead of stagnating. So, what does a third act reinvention look like? For these six Puget Sounders, it’s about taking risks, doubling down, and reaching deep to find happiness.

As a child, Hein’s mother told her she danced while in the womb and signed her up for ballet classes. For a free spirit who preferred twirling and leaping, staid ballet wasn’t a good fit. At ten, her grandmother gave her Spanish castanets, a prescient gift she used for childhood freeform choreography. In college, Hein discovered African dance. In later years, she joined folk dancing groups and fantasized ice skating a routine to the music of Santana.

Eventually, her love of dance took a backseat to a demanding career, moves, home renovations, and marriage. But two years before retirement, Hein noticed a beginning flamenco class that was scheduled nearby and on her one free evening. Recalling her gifted castanets and attracted by the dance’s passionate, exotic allure, she decided to give it a try. After the first class, she was hooked. She told her teacher she could think of no better way to dementia proof her brain than to immerse herself in learning flamenco’s intricate movements. She loved the drama of it—the swirling skirts, the clattering heels, the dramatic arm postures, and the joy she felt dancing again.

With more time to practice post-retirement, Hein signed up for intermediate lessons, performing with Jackie Maclin’s Dances of Spain class at Northwest Folklife Festival. It was nerve-wracking and thrilling to dance in front of a Seattle Center packed auditorium. It was supposed to be a one-time public performance. Then, a few years later, came an enticing call. Would she be willing to dance in a 2018 flamenco showcase to a medley of Santana tunes? It was kismet. “Black Magic Woman” was not only the soundtrack of an old skating fantasy, it became the beloved soundtrack of her flamenco onstage encore.

Don Russell Takes a Walk on the Wild Side

This September, 83-year old Don Russell will be hiking through the Alaskan wilderness in search of grizzly bears to photograph. An avid boater and outdoorsman in earlier years, Russell had always taken photos of mountains and waterways to record trips. Eight years ago, after he retired, his wife convinced him to join her Woodland Park walking group. He did, albeit reluctantly and brought his camera along for company. It was a fortuitous decision.

On the walks, he discovered he loved photographing animals. They were a challenge. They moved. They were unpredictable, even in a zoo. Russell wondered what they’d be like in their natural environment and decided to find out by joining the Northwest Nature and Wildlife Photography Club, upgrading his equipment and traveling to photograph animals in the wild.

His 80th birthday was spent with his photography club in the rainforest islands of Hartley Bay, British Columbia photographing the elusive Spirit Bear and attending a First Nations celebration. A year later, he traveled to Rwanda to photograph mountain gorillas, and then to Tanzania to shoot wildlife photos in the Ngorongoro and Serengeti National Parks. At age 82 he flew to Brazil to the world’s largest wetland, home to the biggest predator in the tropical Americas—the jaguar. That year he also traveled the rough roads of south-central India to capture Royal Bengal Tigers on film.

Russell used his seventh decade to follow an unexpected curiosity, expand a travel bucket list and learn new skills. In the process, he became something new—a bona fide wildlife photographer.

Elayne is 79. Ed is 70. And while they each have a fascinating backstory (she’s a respected Tacoma artist working in multiple mediums and his family immigrated from the Netherlands when he was young) this is a story about taking a risk for late in life love.

Elayne grew up in the Jewish faith and, as was expected by family and religious tradition, at age 20, married a Jewish man. That marriage ended in divorce. Deciding love was more important than a common faith, she fell in love and tried again. That marriage also ended in divorce. So, four years ago at age 75, when she signed up for an online dating site, it was with a healthy dose of skepticism. She planned to date, but never again live with someone.

Still, when they agreed to meet for coffee on the first date, they found they had a lot in common. Elayne is a prolific artist and former 25-year tenured faculty member at Green River Community College. Ed is a graphic designer who worked for advertising agencies and now runs his own design studio. They both love photography.

It was tentative at first. After the coffee date, there was a movie date. For three years they only saw each other on weekends. Then more regularly, though still maintaining separate homes. They traveled together. Had fun adventures as a couple. Elayne realized she’d never been in a relationship so compatible: one where she felt loved, comfortable, and loving. One where she was appreciated for her independence. It became apparent to Ed that he couldn’t imagine being with anyone else. This past December the couple moved in together.

“We finally realized,” explained Ed, “we were a bonded couple meant for each other.”

Jan Johnson Uses Her Voice to Give Voice to Others

For 74-year-old Jan Johnson, a lifetime of activism took on new urgency the morning of November 10, 2016. The retired school librarian and long-time political volunteer felt a sense of dread. Anti-immigrant rhetoric of the presidential campaign was impacting her community. She had fearful neighbors. She heard from former teaching colleagues their students were scared. So, she contacted Kitsap Immigration Assistance Center (KIAC) and volunteered to do whatever they needed. As the only regional nonprofit providing legal and family support services to low- and moderate-income immigrants, KIAC needed a lot, but what they needed most, they told Johnson, was legal assistance for their clients.

Two months later, Johnson boarded a plane for the Washington, D.C. Women’s March carrying a tote of study materials for an exam that would certify her as a Department of Justice Accredited Legal Representative. By June she’d completed the rigorous course and began providing legal representation to KIAC clients.

The nonprofit provides a variety of services including immigration court representation and asylum and removal defense, but Johnson’s passion is making new citizens. She regularly puts in 40-hour workweeks navigating hopeful residents through the complex and evolving requirements to become naturalized; work that includes tutoring them for their civics exam, assisting with citizenship documents, and traveling to U.S. Citizenship and Immigration offices throughout the state to represent them in naturalization hearings. Since that ominous November morning, over 100 citizen applicants from 18 different countries have benefitted from her inspired efforts.

Keith Johnson Goes for the Gold

Jan’s husband, Keith, a retired teacher, is also no slouch when it comes to embracing new roles. He and Jan are enthusiastic cheerleaders for each other’s third act do-over. He supports her efforts by volunteering as a driver for KIAC and helping out whenever he’s not training and competing as a world-class senior athlete.

A competitive tennis player since high school, Johnson has over five decades of tennis tournaments behind him. At 65, he and his partner won the Washington State Doubles Championship in their age group. But not satisfied with that performance, he went in search of an outdoor activity that would help him stay fit in the winter and discovered the lesser-known sport of snowshoe running.

A cold-weather endurance workout that burns more calories than road running and is twice as difficult, competitive snowshoe running is a 200-year old European sporting event that’s only recently gained popularity in the United States. Now age 73, Johnson has competed in seven national snowshoe championships held in such high-altitude locations as the 10,000-foot Colorado Rockies. Despite taking up the sport later in life, he’s good enough that he’s won several bronze, silver, and gold individual medals.

He’s so good that last year Johnson qualified for the 2019 USA World Cup Snowshoe Team. Competing in Italy’s Tyrolian Alps, he took eighth place in his division. He qualified for Team USA again this year, and accompanied by his wife Jan as cheerleader, took the bronze medal in February’s World Cup competition at Mt. Myoko, Japan.

Absent real limitations of health and mobility, you are only limited by your imagination. Your age has nothing to do with it. So, go for it!