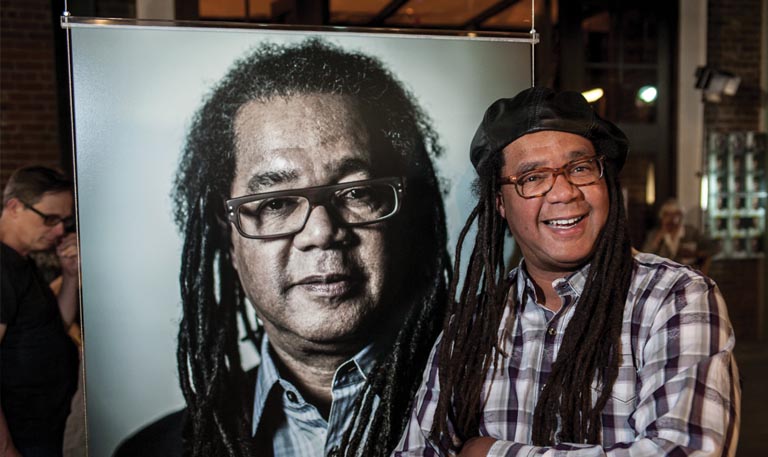 It’s been a discordant year for the arts and times have been particularly tough for musicians. Declining incomes and diminished opportunities feel especially acute for mid- and late-career performers—who may be nearing the end of their careers—and for audiences who love hearing them in person. Yet there have been notes of creativity and cooperation amid the dissonance. Here are the stories of how six Northwest musicians have found hope amid the struggles of 2020, with lessons that resonate for us all.

As partners in life and in art, Miho Takekawa and Diego Coy love making music for live audiences. The duo—she plays marimba and he is a master of Andean flute—had a full 2020 calendar of events until COVID-19 struck. Playing online just isn’t the same. “We’re professionals. We know how to perform, but the feeling is different,” says Coy. “It’s good to have people. We have interaction, we communicate through the music. That’s what I miss the most.”

Coy also misses making money. In addition to performing with Takekawa, he runs sound at concerts and events, but that work is gone, too. Takekawa has fared better financially since she teaches part time at Pacific Lutheran University and Pierce College and offers private music lessons for school-age students, some of whom doubled their sessions during the pandemic. But performing generates more than half of her income, and without concerts, “I feel like I’m 50 percent less Miho,” she says.

The couple have found ways to adapt. Takekawa studied how to make online music lessons more fun for young students and she has been able to teach in the couple’s Renton backyard. Coy has done a bit of recording studio work and they’re now considering online gigs.

“In April, no one really knew how to do Zoom and what kind of microphones and cameras would work,” Takekawa says, but together, musicians have figured out the technology.

Coy and Takekawa both bring immigrants’ perspectives to the pandemic. “It’s been very difficult for many East Asian-looking people,” says Takekawa, who is from Japan. She also worries about women of all races in vulnerable situations. Coy spent his first 35 years in Colombia, where he experienced Dengue fever epidemics, street violence, and lockdowns. “He’s used to being in situations you cannot control,” Takekawa says. “Not for this long, though,” Coy adds.

But as a Nashville friend reminded the couple on a recent Zoom call, struggle has always been part of a life in music and it’s often where creativity comes from. “After I talked with him, I took this pandemic much better,” says Takekawa.

All last winter, the members of Seattle Pro Musica had been rehearsing for special choral concerts to mark the centennial of the constitutional amendment granting women’s suffrage. But alarm over COVID-19 grew as the March performances neared, and even before the state banned large gatherings, Seattle Pro Musica decided the concerts would not take place.

“This was at a time when not as much was known about aerosol spread and singing,” says Karen P. Thomas, the group’s director. Canceling such important shows felt disappointing, but the world soon learned just how deadly singing can be. In our own backyard, the Skagit Valley Chorale had dozens of COVID-19 cases and two deaths after its early March rehearsals and more than 100 members of a choir in The Netherlands got sick after a March concert.

Thomas says the loss of music has been compounded by the loss of community. “One thing people who are not choral musicians aren’t really aware of is how intensely singers miss being able to sing together,” she notes. “As a singer, you put yourselves out there on the line, but you do it with other people who are there to support you. Having that very thing be taken away—and having it be the dangerous thing that can spread COVID more than almost any other activity—is heartbreaking for singers everywhere.”

Seattle Pro Musica’s weekly rehearsals continue online so people can keep singing. “Everyone is at home alone, singing along with a recording, which is not at all the choral experience, but it keeps us all doing something,” says Thomas. In addition, Thomas is music director for University Unitarian Church in Seattle, so she keeps busy planning music for its weekly online services. The pandemic has also given her time to compose and play classical guitar.

Like many other ensembles, Seattle Pro Musica is painstakingly producing videos of singers stitched together via technology. The results are beautiful, especially at a time when singers can’t gather in the concert halls. Keep an eye on seattlepromusica.org for a virtual holiday concert featuring these performances.

A free jazz concert in Seward Park in the 1960s convinced Terry Morgan he was meant to be in Seattle—and meant to be a musician. “This was my moment, right? It was Charles Lloyd on sax, Cecil McBee on bass, Jack DeJohnette on drums, and Keith Jarrett on keyboards. After that, I was hooked,” he says.

The Whidbey Island native studied ethnomusicology and promoted campus concerts at the University of Washington. After that, he launched Modern Enterprises, booking concerts at venues including the Showbox. He is the longtime bass player for singer-songwriter LeRoy Bell and he helps shepherd the careers of several young Seattle-area musicians, including Zan Fiskum (heard on The Voice) and Alec Shaw.

So 2020 has been difficult for Morgan and for everyone else in the live music ecosystem, from artists to ushers and the folks at the concession stands. At first, concerts were rescheduled for summer. Then summer came and most shows were canceled outright. Some renegade artists have staged concerts, but “you don’t want to be responsible for pandemic events,” Morgan says. “The problem is people are so hungry to gather again. We’re seeing how tribal and social that humans really are.”

Morgan believes free outdoor events may help the arts reboot after the pandemic, just as they spurred his youthful interest in music and Seattle. In 2018, he created Borealis, a festival of light at South Lake Union that will be back in 2021. He’s also involved with the development of a new amphitheater at Volunteer Park and with the Pacific Northwest Chalk Fest in Redmond.

Decades ago, Morgan helped start Festival Sundiata, a long-running annual celebration of African culture at Seattle Center, and he has been buoyed by this year’s intergenerational and multiethnic movement for racial justice. “We knew the civil rights activities were big in the 1960s. This is even bigger,” he says. “I’m hoping to see a large revolution in social meaning in the arts.”

“I look forward to manifesting my goals into this pandemic world, and if this is our new reality, this is what we deal with,” he adds. “Now is the time we create things for the future.”

We’ll finish with the tale of two siblings: one who has returned to work and one who remains on the sidelines. Seattle Symphony cellist Roberta Downey is back on the job this fall. The orchestra has fewer players in this era of social distancing, but the symphony’s already-high profile has risen since it was among the first to stream concerts online last spring and it now has a global audience.

Downey’s brother, Paul Hansen, is a busy freelance percussionist who plays in pit orchestras and with touring shows at top Seattle venues. He was in rehearsals for Sister Act at the 5th Avenue Theatre in March when that production shut down, and he hasn’t worked since, other than a few hours a week at a sheet music publishing company.

The state’s stay-at-home orders actually recognized “musicians providing services through streaming or other technology” as essential workers, but it’s one thing to have orchestral musicians play for a live stream from Benaroya Hall and another to stage musical theater and touring concerts without audiences.

Yet music always finds a way. Last March, Seattle Opera veteran Stephen Wall began singing in his yard—and in the same spirit, Downey and Hansen teamed up for summer street concerts. They gathered with their friend Valerie Shields and a few other musicians—masked and socially distanced from each other—to rehearse in Shields’ garden before performing for her neighbors.

The low-key concerts were fun diversions, but they don’t pay the bills, and Hansen wants to get back to work. “I’m still playing at the top of my game,” he says. “Every year, I get just a little bit better and more assured of what I’m doing.”

And although the path toward live performance remains murky, Hansen expects the arts to return. After all, he says, “we came back after 1918.”

Downey says she barely touched her cello for the first few months of the pandemic. The layoff was good practice for the day she hangs up her bow, but Downey is happy to defer that day. “I’ll embrace retirement when it’s time,” she adds. “But I’m not there yet.”

Julie Fanselow is dedicated to living large with a small footprint and writing to make sense of these times. She lives in Seattle and is a frequent contributor to 3rd Act. Read more from her at surelyjoy.blogspot.com.