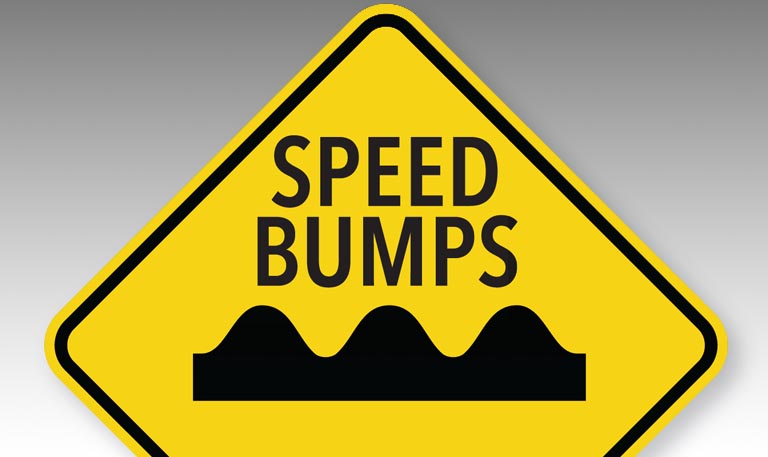 The British consider them “sleeping police officers.” In Mexico, there’s no advance warning that what are known as topes will attack your vehicle’s undercarriage with a vengeance.

In the Florida town of Lantana, the state ethics commission last year found probable cause that the mayor attempted to solicit sex from a constituent in exchange for installing neighborhood speed bumps.

Ah, speed bumps, ever a source of controversy. Debates still rage over whether they’re a loss or a gain. Commercial parking lots and private roadways aren’t in any hurry to relinquish them. Yet plenty of cities no longer replace them when roadways need repaving.

Speed bumps—or humps as they’re technically called on public roadways—were first nicknamed “Holly humps” in 1953 when they were invented by Nobel Prize-winning physicist Arthur Holly Compton. Although he played a role in the development of the nation’s first nuclear weapons, Compton didn’t win any prizes for his Holly humps, which haven’t turned out to be the traffic upgrade he may have envisioned.

Take Everett, for example, where the average speed was reduced by only 1 mph or less with the installation of speed humps, according to city traffic engineer Tim Miller.

Lots of other factors led to Everett’s decision not to replace its speed humps. Portland, ME, reported a delay of 13 seconds per speed hump when ambulances transport patients, causing more deaths and permanent injuries. Based on how they slow emergency response time, speed humps also were outlawed in Broward County in Florida.

There are those who see speed bumps as metaphors for just about anything you can imagine. Some plastic surgeons describe tired areas under the lower eyelids as speed bumps. There’s a fellow with advice on how to overcome speed bumps in the baking business. A business consultant says curbing your impatience helps eliminate your speed bumps to success. Overcome? Eliminate? The demise of the speed bump appears to encompass even the metaphorical.

One of the earliest haters of the speed hump was the late Howard Hughes, who must have cursed its invention. When a woman was in his car, this eccentric playboy instructed his chauffeur to go no faster than 2 mph when he saw a hump in the road, then slowly crawl over the obstruction to avoid jiggling a woman’s breasts. Otherwise, Hughes feared, those boobies would soon begin to sag from all the dastardly humps.

Hold on! Here comes one.

Annie Culver developed a knack for unearthing oddball characters and improbable events as a staff writer for various newspapers. In the early 1990s, she went to work for websites where she wrote sassy essays aimed at women, then she morphed into a writer for several universities in the Northwest. She is retired, yet she still enjoys freelancing.