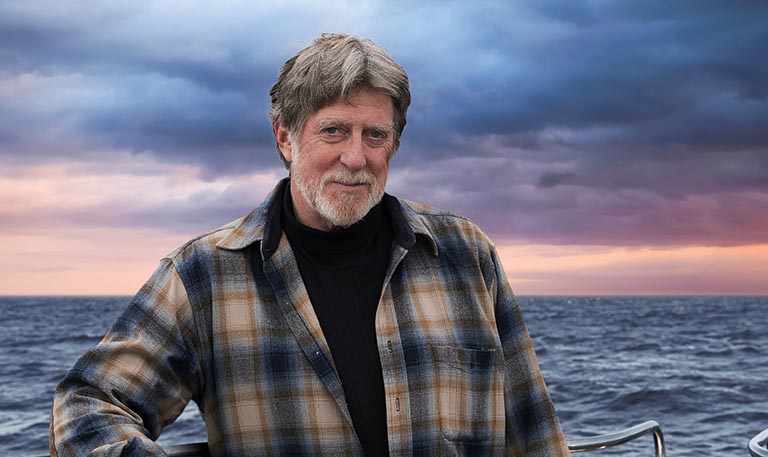 John Delaney has studied oceans for a long time, and by any measure, has had a deeply rewarding career. He has lived on the Galapagos Islands and has visited the sea floor many times. He has peered inside underwater volcanoes and probed hydrothermal vents on the edges of our earth’s tectonic plates—molten crucibles that may have given birth to the first life on earth.

If images of Jacques Cousteau spring to mind, hit the fast-forward button. Over the last decade, under the leadership of Delaney and other visionaries, oceanic studies have been transformed from the ships, satellites, and moorings of yesteryear to state-of-the-art observatories on the sea floor that transmit images and data in real time over fiber optic cables to the Internet, accessible and free for everyone, everywhere.

This isn’t the germ of some science fiction writer’s imagination. After many years of planning, and massive international financial investment, these underwater observatories are operating off the coasts of central Oregon and Vancouver Island, and four other sites around the globe. Delaney’s long-held dream is now a reality: A scientist in Africa can conduct experiments on the ocean floor halfway around the world, and a student in Tibet can observe a hydrothermal vent on her cellphone in real time. Soon, another series of cables along the Pacific Northwest coastline will provide early detection of earthquakes.

In light of these accomplishments, one wonders what this University of Washington professor will do next. Quite simply, he wants to change the world. “I’d like to reach the world regarding the importance of our oceans, using art and culture as integral elements of the message,” he says.

At age 75, Delaney is on fire with purpose. He seeks nothing less than to revolutionize our perceptions, to change the awareness of all humanity regarding what he calls “this incredible planetary legacy we have inherited.”

“People think of the ocean as a place to surf, watch the waves, dig in the sand, fish, and as something we must fly over on our way to Hawaii,” he says. “In fact, the oceans are stunningly complicated, 4-billion-year-old ecosystems that make most of the planet habitable. As a society we are as dependent on this oceanic life support system as the lunar astronauts were on their backpacks, when they were hitting golf balls into outer space.”

The global ocean is not only complex, it is changing in unpredictable ways, Delaney says, and it is urgent that we understand entire oceanic ecosystems better. Oceans maintain the atmosphere, and control or significantly influence the climate in every part of the globe. They modulate storms and absorb and release vast amounts of carbon dioxide, oxygen, and heat. Human activities are rapidly altering the earth’s system, increasing the ocean’s vulnerability to stresses and perturbations. Yet the money we invest to explore and understand this “inner space” is a fraction of what we spend on exploring outer space. “The irony is that on a day-to-day basis all humans are much more dependent on the myriad processes operating in our planetary oceans than we are on much of what happens in outer space,” he says.

In his 2010 TED talk, Delaney noted that nearly one billion people on this planet were undernourished or starving. And in another 40 years, the world’s population may have increased by another 2.5 billion people, creating a delicate balance among the many bearing capacities of the planet and the lifestyles of its inhabitants.

“We can’t solve all the problems just by looking at the oceans,” he says. “But if we don’t understand the fundamental life support system of this planet much more thoroughly than we do now, we’ll have real problems coping with the runaway stresses that will ultimately arise. We need to be able to anticipate serious tipping points in the behavior of the oceans because major changes could have dramatic consequences for life on the continents.”

Delaney knows that to reach the world, he’ll need a lot more than textbooks and scientific papers. His lectures explore man’s relationship with the oceans for as long as we’ve been going to sea, in almost every possible context: warfare and defense, trade and commerce, religion and philosophy, science and education, arts and entertainment, stewardship and ethics. Exotic sea creatures? Check. Life on other planets? Check.

A few years ago, in a large lecture hall at the University of Washington, Delaney stepped up to the podium to begin the first in a series of public lectures called Global Ocean/Human Culture. The lights dimmed, the crowd hushed. Delaney began, not with facts and data, but with a humble disclaimer. “I’m stepping out of my comfort zone,” he said, as if to give his audience fair warning of the eclectic content to come. “My professional specialty is underwater volcanoes and I’m going in many directions that have nothing to do with volcanoes. But it’s important that we start thinking about the ocean in fundamentally different ways than we normally do.”

From there, Delaney took his audience on a journey back 50,000 years to the beginning of human boat making. Over the course of the hour, he spoke of oceans in the context of mythology, art, poetry, and music. He told stories of Homer, Polynesians, Vikings, and an Irish monk named Brendan. He quoted Basho, Neruda, Blake, and Whitman, and played music by Debussy and Ralph Vaughan Williams. Who could resist? The room was captivated.

“I’m growing beyond where I have been,” Delaney says today, and that’s clear in the focus of the work he continues to carry out from his office in the UW’s Ocean Teaching Building and beyond. In essence, Delaney’s relationship to the oceans has evolved through the years from explorer to emissary and advocate. He speaks for the oceans, and urges us, as its stewards, to more fully understand—and take responsibility for—this marvelous, planetary-scale “backpack” that sustains all life on Earth.

Watch a live streaming video transmission of a hydrothermal vent a mile below the ocean’s surface. Visit: novae.ocean.washington.edu/story/Ashes_CAMHD_Live.

Teri Thomson Randall is a journalist, photographer, and filmmaker residing in Seattle. Her writing experience spans the arts and sciences, including staff writing positions at the Journal of the American Medical Association and Pasatiempo, the weekly arts magazine of the Santa Fe New Mexican. She holds graduate degrees in microbiology, science communication, and film production.