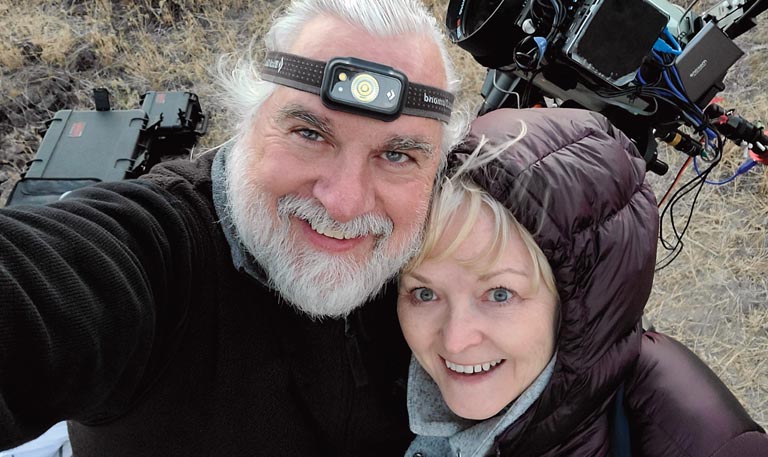 “This is a way you can travel right now,” says amateur astronomer and Seattle resident Tim Regier, 62. “Look up. Every night there’s an entire universe to be discovered. All you need are your eyes, a bit of dark sky, and your imagination.”

As we live with the grinding limits of the coronavirus pandemic, Regier encourages a little backyard stargazing, offering advice on how to do it, and what to look for. “It gives a perspective we need, about our place in the universe—a very small place in a very large universe,” he says.

The son of a Mennonite pastor, Regier has the aura of an Old Testament prophet himself with an intense gaze perhaps developed from long hours behind a telescope. His interest in the celestial goes back to childhood when his family settled in “The Air Capital of the World,” Wichita, Kansas. “As long as I can remember I was interested in airplanes, space, and the night sky,” he says.

After earning his pilot’s license, a week before high-school graduation, he left to join the Navy, planning to enter a pilot-training program for enlisted men. It was cancelled six months in. “I still flew a lot though,” Regier shares, “ all kinds of airplanes. It was cheap in those days.”

Once his military service ended, Regier earned a degree in Aeronautical and Astronautical Engineering from the University of Washington, eventually landing a job at Boeing where he had a variety of research, development and testing assignments, including work on the wings of the 747-8, 777X and the Dreamliner. “Then, after 25 years, I was laid off,” he says. “I thought, what’s next?”

For decades, Regier had researched telescopes and even thought about building one of his own. He returned to that long-held desire in retirement, and a visit to the Goldendale Observatory in Eastern Washington became a tipping point. “I think seeing the Milky Way again, and looking through the telescope there, it took me back to when I was a child and seeing the stars. It reignited my passion. I always thought one day I’ll have a telescope, and one day finally happened.”

He bought an eight-inch Schmidt Cassegrain telescope so he could do both observations as well as take long-exposure photographs. With his wife, NancyEllen, he joined the Seattle Astronomical Society “for the knowledge and to find like-minded people,” attending lectures, and traveling with members to the Cascade mountains for nighttime stargazing.

The telescope quickly became a fixture in their lives. “It makes the night sky accessible for the hidden gems you can’t see with your eyes,” Regier says. “You just hook up a camera and take long-exposure photographs. But there’s also no substitute for looking through the eyepiece and seeing it with your own eyes.”

Expensive equipment isn’t necessary to enjoy the view, he explains. “There’s lots to see with the naked eye or a good pair of binoculars. For those who want more, you can get a decent beginner’s telescope for $300 to $400.” Also handy is a red-light head lamp. “White light isn’t good for night vision,” he says.

In spite of light pollution, it’s possible to see objects in the night sky from the city or urban centers, he notes, but steer clear of streetlights unless they are blocked by a bush or tree.

Regier adds that basic astronomy is a great activity for people with grandkids. “Children have such great imaginations. Go outside and observe something in the night sky then research it online.”

He offers recommendations for spring stargazing and beyond: “Not to be missed is the total lunar eclipse on May 26, 2021, when the Earth passes between the sun and the moon and the moon moves through the Earth’s shadow.”

In the Seattle area, it begins at 2:45 a.m., and is still partially eclipsed when the moon sets at 5:29 a.m., with totality between 4:12 and 4:26 in the morning. “The moon takes on a dark, reddish color,” he explains, “because the Earth’s atmosphere scatters blue light, leaving mostly red. It’s the same effect that creates red sunrises and sunsets.”

Even when there isn’t a spectacular event like an eclipse, the moon makes for wondrous viewing. “We take it for granted but it’s always changing. Depending on the time of month, there’s something new,” Regier says. “You can see it with your eyes of course, but a good pair of binoculars will bring it in close to observe craters, mountains and the shadows they create.”
Another celestial target is Mars. Last October it made its closest pass by Earth in a couple of years, and won’t return to that position until 2022. Regier says even as Mars becomes fainter, the planet is still worth seeking out. “In March, it’s in the west-southwest about halfway up the sky a few hours after the sun sets, so around 8 or 9 p.m., would be good. Look for a distinctive orange-red color.” Regier adds that Mars is “neat to see” because it’s our closest neighbor and may soon host Earthlings.

Other wonders to look for include the North Star. “Everyone can find the North Star or Polaris,” Regier says. “It’s a fixed point in the sky. Just face due north and look halfway up from the horizon. The front two stars of the Big Dipper point to it.”

And from our perch on an outer band of a spiral arm in the Milky Way, we can look into the very center of our own galaxy. “You’ll need to get away from city lights, but it’s worth it,” says Regier. “The Milky Way spans the sky from the southern to northern horizon, and rotates with the Earth’s rotation.”

Another a thrill is catching a glimpse of the International Space Station (ISS) when it routinely passes over the Northwest. Easy to spot, the ISS looks like a bright, fast-moving star, visible as the sun glints off the craft. Fun fact: It’s only about 260 miles overhead, closer than Eugene, Oregon.

Mark your calendars for a summer show when Saturn and Jupiter will be at opposition—that is, the Earth is between the sun and those planets while they are at their closest to the Earth—Saturn on August 1, Jupiter on August 19. They’ll be big and bright. “Jupiter is especially bright because it’s so huge,” says Regier. “With binoculars, you can see the four Galilean moons around Jupiter, so named because those are the moons Galileo could see with telescopes of the time. They’re interesting to watch because they move quickly relative to the planet. It looks like a dance.”

All this stargazing may be just the thing to ease our pandemic angst, Regier says. “People need a sense of wonder, and the night sky provides that. Just think of it: A photon of light left the sun, a star, or a planet. It traveled millions of miles through space and time to arrive at this moment for you to see. That’s amazing.”

Find out what’s in the sky every night:
https://telescopius.com/
https://www.space.com/skywatching

Tim Regier sends occasional emails highlighting an astronomy photo he’s taken, accompanied by some historical background, and interesting facts. If you’d like to be added to the mailing list, email astroduude@gmail.com.

Connie McDougall is a former news reporter and current freelance writer of nonfiction and personal essays. She lives in Seattle.