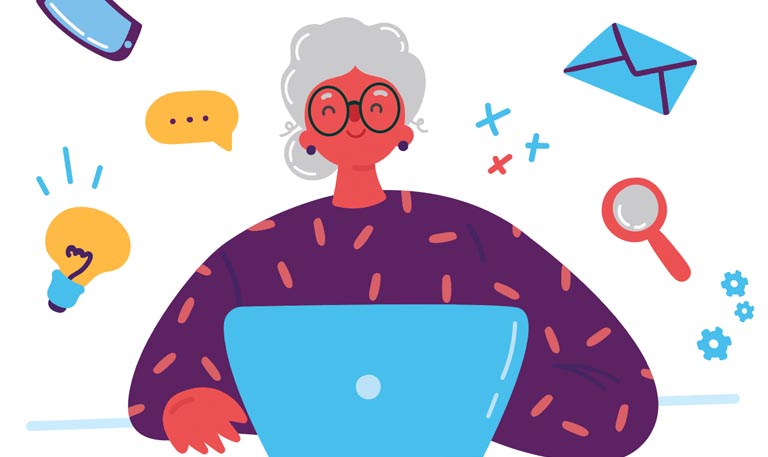 We live in the golden age of lifelong learning, when we can instantly access untold riches of information without leaving home. But it’s fun to learn in the company of others, and Western Washington offers plenty of low-cost options for older adults who want to blend intellectual exploration with social interaction.

Fun is a key word. Although topics can be serious—and classes are often taught by college faculty—people who sign up for courses with the University of Washington’s Osher Lifelong Learning Institute (OLLI-UW), Telos at Bellevue College, or similar programs aren’t seeking a degree. There are no grades or tests. People are going back to the classroom for the joy of learning.

For some, it can be an opportunity to make sense of the headlines. Not surprisingly, the Osher-sponsored course Russia, Ukraine, and the U.S.: An Unlikely Troika in the 21st Century filled up long before its midwinter starting date. “We plan these six months in advance, so we don’t always know what’s going to be timely,” says OLLI-UW director Natalie Lecher. The course was requested by people who’d previously enjoyed classes given by David Fenner, a UW lecturer whose specialties include the Middle East and Muslim migration.

In another case, Osher participants told Lecher they wanted to learn about the emerging world of cryptocurrency—and after two years of searching, she found a UW undergraduate with extensive knowledge of the topic. “Senior schools seniors in Bitcoin, blockchain,” read the headline on a UW-Bothell website account of Zachary Nelson’s class, which he has now taught for Osher in Mukilteo and Redmond, as well as for Bellevue College’s Telos program.

“Our instructors are phenomenal,” says Miste Damrill-Leib, whose portfolio as community and continuing education director at Bellevue College includes the Telos program. (“Telos” is a Greek word for fulfillment or purpose.)

Learning doesn’t just happen in the head, and Damrill-Leib says some of the most popular Telos classes are taught by Irene Pasternack, a specialist in the Feldenkrais Method who helps people relearn how to move. “She actually has helped people who were afraid to be at home by themselves because they were concerned that if they fell down, they wouldn’t be able to get up,” adds Damrill-Leib.

Instructors enjoy working with older learners. At a recent Osher program, Tangled: Why Your Hair Matters to Society, UW professor Anu Taranath was peppered with questions and comments—and she says that’s typical in her programs, which focus on race, identity, and belonging. “I love Osher because folks are so curious, and if you give them a microphone, they really want to talk and share.”

Taranath says she feels it’s her civic duty to engage with people of all ages, and Osher helps her expand beyond her usual circles on campus. “I love elders and have always loved being around elders and people who have led more life than I,” she says. “It doesn’t necessarily mean people are more wise. It just means we’re all coming into the story from different perspectives. That is enriching to me in a variety of ways.”

Osher and Telos hold classes (priced from about $30 to $85, depending on length) that meet once a week for two to eight weeks. Both membership-based organizations also have student-driven activities, with groups meeting regularly to discuss books or movies. Osher offers an extensive series of free lunch-and-learn sessions that are open to nonmembers, and Damrill-Leib says Telos is exploring the idea of educational travel matched to some of its classes—maybe a journey to Japan and a trek to explore the history of rock ‘n’ roll.

The Lifetime Learning Center (LLC) is another longtime education initiative for older adults. Originally inspired by the work of Father John LaFarge, a Jesuit priest who advocated for aging as a time of seeking meaning and fulfillment, the nondenominational LLC now holds classes at Lake City Presbyterian Church in North Seattle. Many of its programs—which have included meditation groups and ukulele circles—lean a little lighter than those at Osher and Telos, but there’s always a good variety in its offerings, which last eight weeks.

Osher, Telos, and LLC classes all take place midday to minimize the need for traveling in rush-hour traffic or at night, and in Osher’s case, the classes often come to participants: Courses are frequently held at retirement living communities including Mirabella in downtown Seattle, Era Living’s University House in Wallingford, and Trilogy at Redmond Ridge.

“What we’ve heard from our members is ‘It’s hard to get to campus, traffic is bad, the weather is bad, I don’t know where to park,’” says Lecher. “They’ve said, ‘We really want to be in our community,’ and I think it’s made our program more effective and relevant to our members.”

Lecher endorses how learning in community can boost social ties, too. “People come up and tell me great stories all the time,” she says, noting how two women who met at lunch-and-learn sessions in Redmond have become good friends, sharing the monthly gatherings as well as stories about their families—and it doesn’t even matter that they’re on opposite sides of the political divide. “They’re able to set that aside and develop this lovely friendship. It was so nice to hear that.”

Julie Fanselow spent the winter in Mexico learning how to teach English as a foreign language. She hopes to use that new skill back in Seattle, where she writes and edits for clients including 3rd Act Magazine and Rick Steves’ Europe. Read more from her at surelyjoy.blogspot.com.

Here’s a sampling of educational offerings for older adults in our region. Many other entities (including libraries, and parks and recreation departments) offer adult education programs, and some colleges waive or reduce regular academic class tuition for older students.

The Osher Lifelong Learning Institute at the University of Washington is one of about 125 Osher programs around the United States. Classes are held on the UW campus as well as at retirement residences and community centers in several Seattle locations, plus Everett, Mercer Island, Mukilteo, and Redmond. osher.uw.edu

“Engaging Inquisitive Minds” is the motto for this organization holding classes and discussion groups in North Seattle. A free lunchtime “Let’s Talk” series on Mondays is open to the public. Programs are held at Lake City Presbyterian Church. LifetimeLearningCenter.org

Neighborhood-based programs for people 50 and older include specialty offerings for people with dementia and the LGBTQ community. Search for lifelong recreation on the city website or call 206-615-0619 for the latest catalog. seattle.gov

Held in locations including Bellingham, Kingston, Port Townsend, and Poulsbo, these short courses from Western Washington University have featured such topics as Do Social Democracies Work? and The Poetry of Mary Oliver. oce.wwu.edu/all