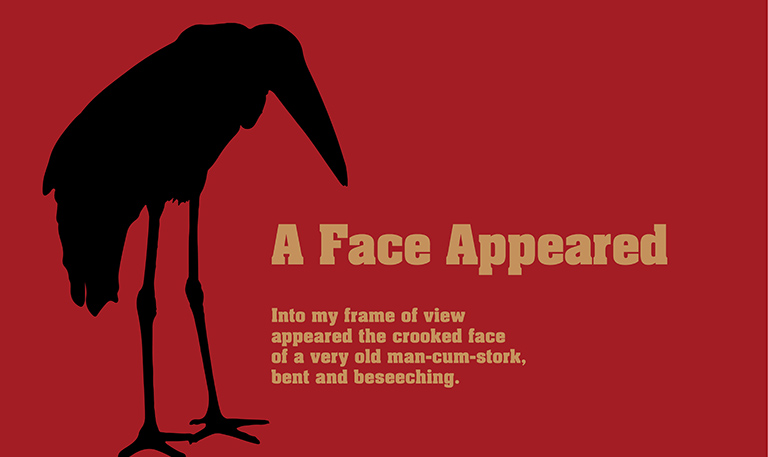 I was volunteering at Town Hall. The event was an interview with Diane Rehm about her recent memoir, On My Own. For her, the ordeal of her husband’s dying had moved her to become an advocate for choice—the choice, when faced with chronic disease and subsequent dissolution, to end one’s life.

I sat in the vestibule with a sister volunteer, taking tickets, checking names. It was busy: The small space teemed and emptied, teemed and emptied as the crowd found its way to the stairs leading up to the Great Hall. Happily, I was channeling the flow, when into my frame of view—the upper right quadrant—appeared the crooked face of a very old man-cum-stork, bent and beseeching. His lower jaw, thrust forward as if off its hinge, revealed a line of teeth, unsymmetrical; some were missing.

I recoiled, sad to say.

He was not badly put together—navy blue London Fog, clean shirt, and a properly knotted tie. At the same time, mental dishevelment had landed in his body.

“May I scan your ticket?” I asked.

Confused, he said, “Where can I get the handouts?”

“The Times said. And I heard on the radio that I could get the information here, tonight, about…something, oh, I can’t remember—compassion and…I think there was an and…compassion and, well, about choosing to die, I think.”

“Diane Rehm may talk about that, but I don’t know about the handouts,” I said. “You can get a copy of her book over there, on that table,” I pointed across the lobby.

“Oh, books, I don’t need more books,” he waved an imagined cloud of gnats away from between our faces, now disconcertingly close. He did not smell, and, sad to say, this I had expected. “I could write as many books about that,” he said.

I put down my scanner. “Would it be Compassion and Choices you mean?” I asked.

“Death with Dignity?” I continued, and his face brightened.

I indicated the table, festooned with piles of information about Town Hall membership, programs, and the like. “Let’s go see if there’s more of a description about her talk, “I said. “And if there will be handouts.”

“Diane Rehm.” I took his elbow and we shuffled to the table. He was very old. I wondered that he was unaccompanied. Still agitated, he pointed to the picture that appeared in Town Hall’s calendar.

“Yes, that’s her,” he said accusingly. “That was the picture in the paper, damn the paper. It said there would be handouts and fliers about Compassion…with…Compassion….”

It struck me that we were having some kind of significant moment, but what to do remained unclear. I reached for a piece of paper, that I might write down the names of those various organizations I was familiar with in the areas of death and dying, ones that offer instruction on how to do the latter with intention.

“Do you have a computer?” I asked.

“No,” he said, fumbling with a flier.

I paused, defeated. “Do you have access to a computer?” I asked, knowing better.

Well, here it was—his need confronting the event that would talk about the need but not fulfill it.

He had no computer. And no companion. But he had the need of a flier, a handout on how to execute a choice, the choice for what remained inferred, but unspoken.

“Is there an elevator?” he asked.

“Yes,” I said, and reclaimed his elbow and we shuffled back across the lobby. That he did not have a ticket ceased to matter. I pressed the button, summoning his ride. He turned, then, his stork-tall stoop straightened, “Thank you,” he said. “Thank you for your help.”

Touched, because I had given so little—a bit of attention; the effort my words made to enter his lowered ear—and because his need had propelled him out on this late-February evening, alone, confused, in search of handouts. Would he find, in this onstage interview, anything of use?

I wondered how further I could have helped him. His thank you settled in my heart for a little while. I returned to my station.

A practicing Buddhist for over 30 years, Hollis Giammatteo has sought experiences that challenge her practice, from teaching writing to working with the elderly. She co-founded, managed, and wrote plays for The Wilma Theater in Philadelphia and for Rhode Island Feminist Theater. Hollis has published in a variety of magazines, and in May she released her memoir The Shelf Life of Ashes (She Writes Press, 2016).