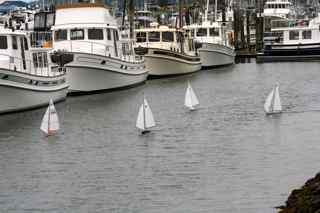 Is the high cost of maintaining a competitive sailboat eating into your retirement income? Perhaps the creeping frailties of getting older are hampering your enjoyment of the many Fidalgo Island lakes and waterways? Maybe its time to scale down and invest in a simplified version of your passion for competitive sailing, and try racing Radio Control (RC) Model Sailboats. An informal group has formed on Fidalgo Island that races these boats. You will find them every Tuesday and Saturday afternoon, at Cranberry Lake on Whidbey Island. Locally, there are about seventeen one-class boats either completed or under construction, with as many as eight boats racing on some days.

The boat we sail is the most popular one-design model yacht registered with the American Model Yacht Association, the Soling One Meter. These boats are sold as kits, or as a completed boat from the manufacturer, Victor Model Products. Some of the local racers will also build a kit for you, if you want a more customized boat. Along with the kit, you need to buy kit building materials and the electronics. The kit sells for about $135. Many of our members have built their boats for $400 or less, including the electronics. Also, the manufacturer sells completed boats for approximately $605, including the electronics.

Time required to build the kit varies, but generally takes about 40 hours depending on the customizing you choose to do. There are some special jigs and fixtures that will greatly simplify construction, and tuning of your boat, to be a competitive racer. There are also a number of people who can offer help and sailing advice when racing with this group.

We have sailed in several areas around Fidalgo Island, both in fresh water lakes as well as in saltwater at several locations around Cap Sante Marina. The best venue weve found, however, has been at Cranberry Lake, in Deception Pass Park, on Whidbey Island. The facilities there are excellent, with a pier to launch and sail from, plenty of room for lounging (even while racing) in whatever comfortable chair you bring, and nearby restrooms (a crucial amenity for our age group). The winds at Cranberry Lake are more consistent than other locations, probably because of its lack of surrounding hills and direct exposure to Puget Sound. During the summer months, all of the locations have excessive weed growth at times, but Cranberry Lake seems to have less than the other locations.

During racing, accidents do occur. Hulls have been holed in collisions, and demastings have happened, but usually from rigging problems. One boat even sank, although it was not a Soling. The owners son went back to the sinking site, and recovered the boat using SCUBA gear. One member of our group has an RC tugboat, rigged to provide rescue and marker buoy deployment. We also have full-sized dinghies available for on-water service, and recovery operations.

The boats are very rugged, but with use, some breakage can occur. During construction, there are several techniques available for strengthening known weak points, without taking on excess weight. The boats must weigh no less than 10 pounds, and some of our builders go to extremes to arrive at exactly 10 pounds on completion of their kits. However, it seems that sailing expertise and proper racing strategy usually overcome most deficiencies in the boat.

There is another model sailing group located at Sequim that some of our members have visited several times. The fully enclosed pond, on which they sail, makes sailing visibility and crippled boat recovery easier. Usually they sail many more boats than we do, so competition is tough. However, we have at least one first place, and several seconds when we have participated in racing there.

For the older sailor, this type of sailing activity can extend your on-water competitive experiences for many years. There is also the added attraction of the on-dock camaraderie that occurs at our racing events. Everyone is rubbing shoulders during the races, rather than being isolated on individual boats. So, the trash talking does not have to be shouted across the water, and the race officiating is done by someone right there. All in all, I’ve found this to be a wonderful way to get the competitive juices flowing, without the physical exertion and expenses inherent in many other types of competitive activities.