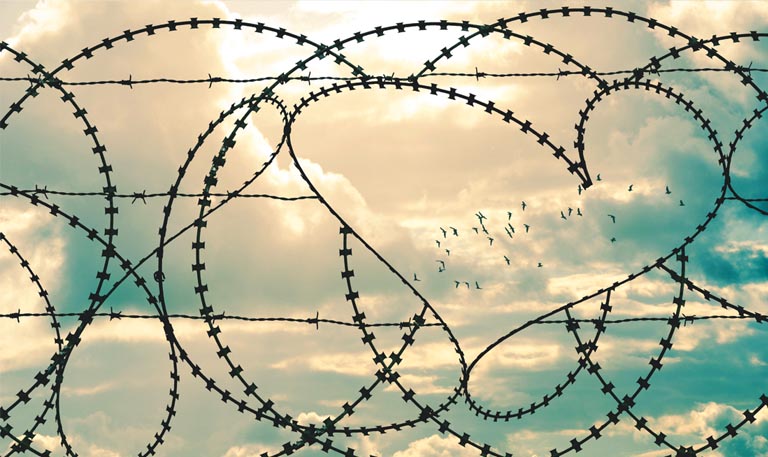 When I began to volunteer at the state prison in Monroe, Wash., I was assigned to visit two men. The first, “Thomas,” was incarcerated without the chance of parole and the second, “Luke,” was in a treatment program without a definite release date.

Initially they both were a bit wary of me, as though they were figuring out if I could be trusted. However, as we spent more time together, they began to let down their guard and slowly started to share what it was like for them to be imprisoned. They also talked about the challenges they’d had in life before incarceration. Both shared with me the happier times they had enjoyed in childhood despite the challenges their families faced.

Eventually, they both confided in me about the crimes they had committed: Thomas murdered a young woman while robbing her home; Luke sexually abused one of his children and molested another child in a park.

I always knew they had committed egregious acts but was taken aback by their revelations. I didn’t know if I wanted to continue seeing them, especially since neither of them seemed to show much remorse for what they’d done.

I struggled with this for several weeks before a colleague in whom I had confided reminded me of the commandment in both the Hebrew and Christian scriptures that states, “…thou shalt love thy neighbor as thyself …” But, how, I thought, could these men who had committed such evil be considered my neighbor? Aren’t we taught we should hate evil and those who do evil?

I then decided to do some research and found that the directive to love thy neighbor is a near universal concept. In the Tao Te Ching, Lao-Tzu wrote, “The world can be turned over to the man who loves all people as he loves himself.” Buddha taught his disciples to see themselves in all beings, and to be free from negative feelings toward others. Muslim doctrine prescribes loving for one’s brother what one loves for oneself.

As Thomas and I spent more time together he began to share with me his interest in painting and art—how throughout his years in prison he created artwork with whatever materials he could find. Over the course of time, his talent was recognized by the prison staff and he was given real art supplies that he was allowed to use in his cell. At the request of some of the wardens he painted murals in hallways and common rooms.

I told him about my writing and performing and how I had started to make art in a support group for cancer survivors. That’s when he told me about his own experience with cancer. Most days when I visited, we would sit at our table and make drawings on scraps of paper while we talked.

On my very first visit with Luke, he revealed that he was an alcoholic. Although he attended AA meetings in prison, there was no one who could help him work through the Twelve Steps. At that point I’d been sober for 20 years and still active in AA. I told him that and then offered to sponsor him in the program. From then on, during visits, we read AA literature together and worked on his steps. Sharing my own experience, strength, and hope with him brought us closer together.

At some point I realized that I had stopped thinking of Thomas and Luke as criminals. I saw them as two middle-aged guys who had messed up their lives, and, like many people, were doing the best they could to make it through another day.

In the Bhagavad Gita, the text which incorporates the core teachings of Yoga, we’re told to “…see the Self present in all beings, and all beings present in the Self…” and that when we come to realize God abides in us, then we will see that it is true that God abides in everyone.

It took many months for me to come to the place where I saw the divine and myself in Thomas and Luke. But when that finally occurred, I no longer felt separate from them.

They had become my neighbors and I loved them.

Stephen Sinclair lives in Seattle’s Capitol Hill neighborhood. Earlier in his life he enjoyed a career in show business while working out of New York and Chicago. A career as an ordained Unitarian Universalist parish minister and a hospital chaplain followed. Most recently, he worked with the homeless, and is a weekly volunteer visitor at the Monroe Correctional Complex.