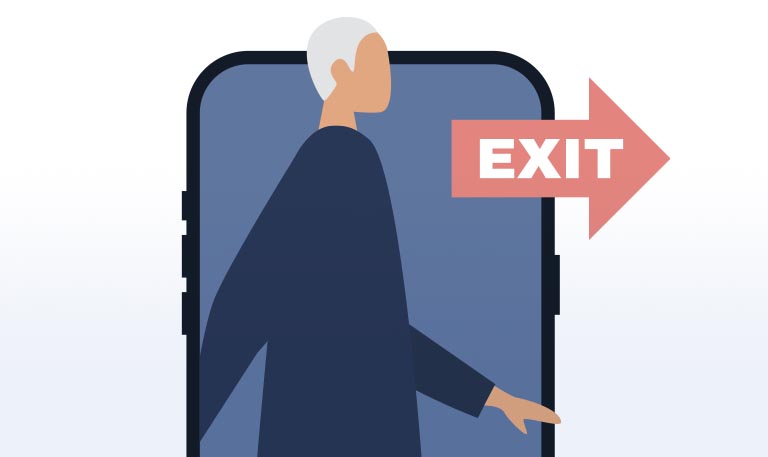 A couple of weeks ago I said that, out loud and to no one in particular, as I waited at a bus stop. I’d wanted to check the transit app to see when the bus was due so I could text the friend I was meeting at the Pike Place Market to tell him I was running late. With no phone I couldn’t do either of those things.

Despite not knowing its ETA, the bus arrived. When I got downtown my friend was there and didn’t seem concerned that I was late. I apologized anyway and told him I didn’t text him because I’d forgotten my phone.

As we walked through the market I kept patting the back pocket where I always keep my phone to check to see if it was there. It took me about half an hour to stop that and just accept the fact that I was now electronically disconnected from the world. And you know what? It was wonderful! I was able to relax. Without the intrusion of texts, news alerts, emails, weather reports—all those distractions that for years have forced themselves into my consciousness—I was able to be more present in the moment. I listened more closely to my friend. I took in all the sights, smells, and sounds of Pike Place, and most importantly, I experienced a heightened awareness of myself.

Every day when I’m out, I see people looking at their phones while walking down the sidewalk, seemingly unaware of what’s going on around them. I see them sitting in the park, in clinic waiting rooms, or at tables in restaurants, hunched over their smartphones, scrolling through social media feeds, looking at TikTok, or reading emails. They’re not talking to each other. Often, they don’t even seem to conscious of those around them.

Without my phone I couldn’t check to see if it was going to rain later that afternoon. I couldn’t Google the answer to any questions I had. I couldn’t check my newsfeed to see what was happening in the world. The only thing that mattered was what I was doing right then and there.

After my friend and I had finished shopping and said goodbye, I took the bus back home. When I unlocked my door and stepped into my apartment I immediately saw my phone. It was on the table where I’d left it.

Over the next few days I took time to reflect on my relationship to my phone and to the social media platforms to which I subscribe. I realized that I become anxious if I don’t continually check my Facebook and Instagram accounts. My friends and family might think I don’t care about them if I’m not liking their posts or commenting on them.

I also realized that sometimes when I see all the things my friends are doing in their lives, I can become dissatisfied with my own. More importantly, as I keep looking outside myself to be filled with news and information, I quit listening to the still small voice within me—the voice of the divine presence.

So, I deleted the social media apps from my phone. It took a few days to get used to not knowing what was going on with everyone, but I soon realized that I didn’t need to know. Instead of reaching for my phone, I would sit down, become aware of my breath, and spend time in contemplation.

I’ve also begun to not take my phone with me when I’m working in the garden or going for a walk. If someone needs to get hold of me, they can leave a message or text me. It’ll be there when I get home.

I know not everyone is able to do this. Perhaps they’re a caretaker for a loved one or are an individual who is socially isolated and needs social media to connect with the outside world. But if you can, why not give it a try. You’ll learn a lot about yourself.

And maybe, just maybe, you, too, will hear the voice within you.

Stephen Sinclair lives in Seattle’s Capitol Hill neighborhood. Earlier in his life he enjoyed a career in show business while working out of New York and Chicago. A career as an ordained Unitarian Universalist parish minister and a hospital chaplain followed. Most recently, he worked with the homeless and is a weekly volunteer visitor at the Monroe Correctional Complex.