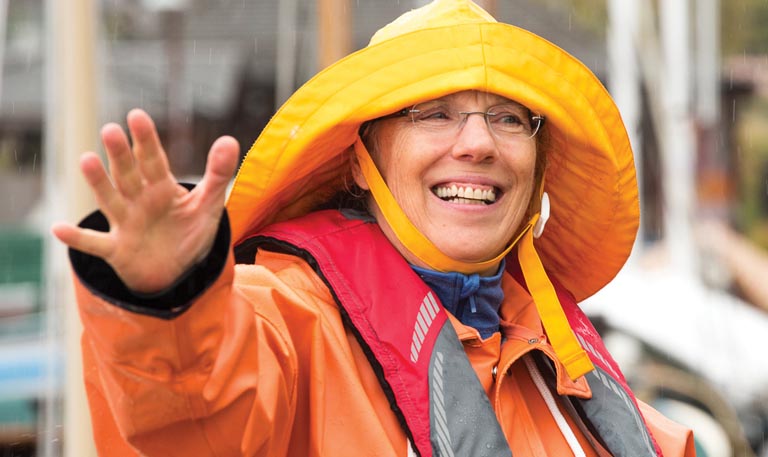 Reigniting an Old Passion After a Life-Changing Injury

I think of myself as a competent, independent woman with an adventurous streak. I was dedicated to my career in health care, eventually working in reproductive health in developing countries. My life plan was clear, until an accident changed its trajectory and I had to reimagine everything.

In the late ’90s, I proudly served in the Peace Corps volunteer in the small West African country of Togo. I was assigned to Togo’s second-largest city, where there was a hospital, a post office, a market, and one paved road, the national highway—two lanes that cut through the center of town.

I worked for the regional Ministry of Health, so our office had electricity (most of the time) and half a dozen computers. Working with local doctors, we set up family-planning programs in the larger villages and trained care providers. I also helped establish a health-information system for the region, computerized the inventory system for the pharmacy supply depot, and trained local staff to run both. The most satisfying part was training people in modern health care management, knowing they had the skills and confidence to carry on after I left.

After the Peace Corps, I worked in Washington, DC, then Seattle, designing and managing family-planning and reproductive health programs in Africa and Southeast Asia. I loved the work. Then it ended with a crash—a bicycle accident and brain injury. After months of rehab, and a trial return to work, I found I couldn’t do it, not even part-time. I retired in 2011 at 58.

So began my new life.

Like many people after a major loss, I wondered: What’s next? I had always been active outdoors, but now I had trouble focusing my eyes. For the first few months, I tripped over curbs because I couldn’t see properly. I thought my active days were over.

One day, a friend enthused about learning to sail. Something stirred in me. Although I grew up sailing and sailed whenever I could as an adult, it had been a decade since I’d been on a boat. As she talked about sailing, I thought maybe I could do that, too. I asked her to take me along. We rented a 20-footer at the Center for Wooden Boats on Seattle’s Lake Union.

It was a perfect day and I was reminded how I loved sailing as a kid: the wind snapping my hair back, the crisp air, the sheer exhilaration and freedom of skimming fast across water. That day launched my third act.

The center became my home away from home. I took sailing classes and started volunteering so that I could trade hours for time on the boats. After a year, I volunteered as a sailing instructor and I was good at it. After a couple of years, I decided to see if I could get paid to teach.

Turned out that’s a big deal. I needed a U.S. Coast Guard master’s license requiring seven written exams, a physical, drug test, and security clearance, plus certifying I’d had 360 days of qualified sea service. The process was daunting. It took me months to track down the owners of boats I had sailed on over the years and collect signatures for the sea service. I took an eight-week review course to learn the material for the written exams—navigating and reading charts, ships’ lights and sound signals, towing barges, putting out fires, and operating safety equipment. After my brain injury, I wasn’t certain I could learn all of this but I studied hard and passed. I got my USCG master’s license at age 64 and was hired to teach sailing at the Center for Wooden Boats.

This spring, I went further, gaining the basic keelboat instructors certification from U.S. Sailing. This three-day course pushed me to master new skills and got me thinking differently about how to teach sailing as I demonstrated my technical abilities in the classroom, on the dock, and in the water.

The wonderful thing is that over the last six years, I’ve reconnected with a sport I loved as a child and found new purpose and passion. In spite of my accident, I pushed myself to learn and master new skills.

Now, when the sun shines and the wind blows, I am right where I want to be, a place I didn’t imagine possible—on the water, sharing my love of sailing.