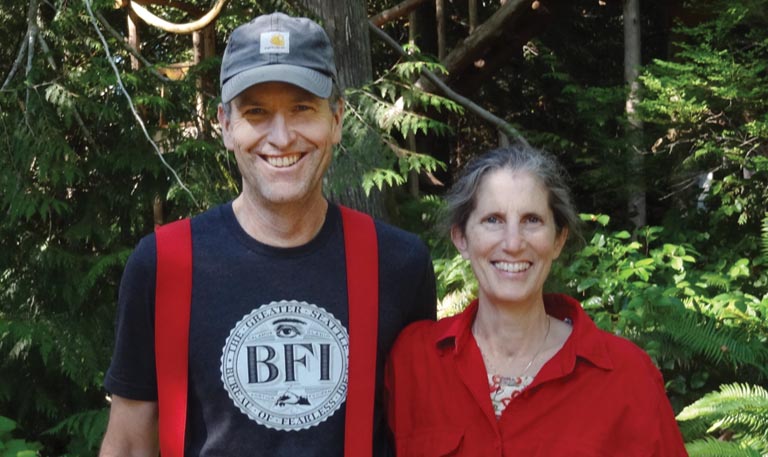 About three years ago I decided to retire early from my job teaching biology at the University of Washington. I had a plan: spend part of my time restoring a little salmon stream on Washington state’s Olympic Peninsula called Tarboo Creek, and part of my time writing about that project, climate change, and environmental ethics. Planting trees and writing—what a great third act.

But as a comedian once said, “If you want to make God laugh, tell him about your plans.”

Not long after I started to put my plans into motion, some Tarboo Creek neighbors told me about an article published in the local newspaper. A company headquartered in a nearby county was planning to build a private military and paramilitary training complex with seven gun ranges, two helicopter pads, a bunkhouse, lodge, RV compound, and a cluster of cabins on 40 acres of forested land near the creek’s headwaters.

By then my family and I had been helping with the Tarboo Creek restoration project for more than 12 years. Roughly 1,000 schoolkids had planted trees to reforest the watershed. Dozens of tribes, government agencies, and private nonprofits had contributed funding and expertise, and more than 3,000 acres had been placed under permanent protection. We’d heard high school kids give testimonials, as they headed off to study conservation biology in college, saying that their interest in the planet’s future started when they planted trees along Tarboo Creek.

We soon realized, though, that the gun range development was not just a threat to our little stream. The story was much bigger than that.

It turned out that this company was moving to Tarboo Creek because they’d been evicted from their previous site, which had been marketed as a “rally point” for “like-minded people” when “all else fails” in Facebook posts and podcasts. During an interview with the company president, one podcast host noted that the Expedition Rifle—an AR-15 manufactured and sold by the organization—comes with a “ … specially minted coin that will grant you access to his compound when it hits the fan” and that purchasers also receive “… a lock-sack bag that the rifle fits in so it can be buried in a person’s yard … where no one would ever look.”

Tarboo Creek was going to be the new rally point.

That’s when I heard God chuckle—my plans needed to be redrawn.

Who was going to oppose this “vision” for Jefferson County’s future and promote the good and ongoing work to support new family farms, innovative agribusinesses, and next-generation small-scale forestry? Unlike so many rural areas in the U.S., young people were moving into the county, not out. They were attracted by the values that now needed defending, but they were busy organizing their first homes, getting careers going, and starting families. This fight was not for the young—instead, it fell to the elders. Retirement should be a time of engagement, not withdrawal.

A large part of my third act has been supporting, and more recently leading, the community group that is opposing Fort Discovery’s plans. Our little band of neighbors has expanded to 600 active supporters. We have held community meetings, submitted petitions with more than 1,100 signatures, exposed illegal activity at the rally point’s new site, and backed the press as they publicized ties between the company and extremist political groups.

In response, our organization has been sued and individual board members harassed. And yet, we persist.

In late 2018,  Jefferson County passed a new ordinance on commercial gun ranges that would have allowed the rally point company to proceed with their plans. We challenged the law and won. In response to continued community input, the Board of County Commissioners switched course completely and passed an ordinance requiring new commercial gun ranges to be built indoors.

For the moment, Tarboo Creek seems safe from the threat of becoming a rallying point for anti-government “preppers.” But the work continues. The company is suing the county yet again and recently announced “fully auto extravaganzas,” where members of the general public can shoot military-grade machine guns at their Tarboo Creek location, in defiance of local and state laws.

The price of democracy is eternal vigilance.

I am, however, still planting trees, and still writing. I just feel more a part of my community than ever before.

What a great third act.