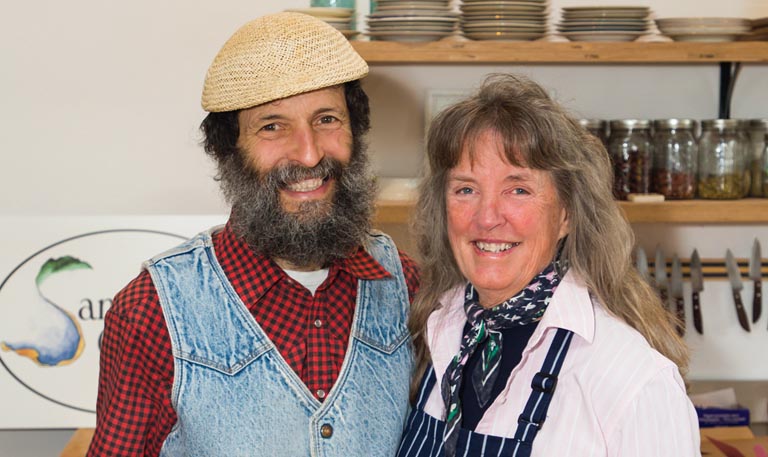 Suzanne Wechsler’s father loved picture-pretty fruits and vegetables. If he was going to sell an apple at one of his Southern California produce stands, it had to be a perfect apple. As a little girl, Suzanne watched him pick them out at the wholesale markets. But by the time she graduated from high school in 1968, she had made what was, in her father’s eyes, a radical decision: She would eat only organic foods. In those early days of organic farming, that meant choosing apples that tasted good, but weren’t pretty.

A few years later, Suzanne left California in her VW bug and moved to Minneapolis, where she landed a job managing a health food store, organized an organic food buying club, and started an indoor greens business. Soon, she was doing TV segments on healthy foods. In the early 1980s, she moved back to Los Angeles and went to work for the legendary Mrs. Gooch’s Natural Foods Markets. Eventually, she headed up to Seattle and joined the team at Larry’s Markets.

Meanwhile, Roger Wechsler, who grew up roaming the forests, ponds, and beaches of Oyster Bay, Long Island, caravanned out to Seattle with some friends in 1969 and never looked back. He got a job managing the Capitol Hill Co-op (now the Central Co-op), and went on to specialize in wholesaling organic produce around the Northwest. He fell in love with the upper Skagit Valley, and when a 35-acre farm came up for sale near Bow and Blanchard, he decided to try farming too.

“Roger and I would see each other at the natural foods trade shows,” says Suzanne.

“And I was calling on Mrs. Gooch’s,” adds Roger.

“When Roger invited me to visit him in Skagit, I drove down Chuckanut Drive from Bellingham…”

“…And she fell in love with the area before she fell for me,” finishes Roger.

When they learned that a 180-acre organic dairy farm just up the road from Roger’s place was for sale, they couldn’t resist. They purchased the farm and began teaching themselves the cheese business. A year later, they got married.

“There’s farming, and then there’s dairy farming,” says Suzanne. “We didn’t know anything about cows or making cheese.”

Thankfully, they found Jim Morgan, who knew the farming side of the dairy business. Twenty years later, at 70, he is still their farm manager.

“Jim is the most physically fit of the whole staff,” according to Suzanne. “You do have to be physically fit. We don’t have a sit-down job.”

Suzanne and Roger are both 69. Over their decades together, their business has grown from making cheese and selling it at farmers markets around the Pacific Northwest to a newer identity as a “destination farm,” featuring a thriving retail business, a café, and tours of their state-of-the-art, 3,000-square-foot cheese-making building, which is powered by 163 solar panels. They are a showcased stop on the Bow-Edison Food Trail, which also includes Bow Hill Blueberries, Edison’s Breadfarm Bakery, Blau Oysters and, informally, Taylor Shellfish Farms on Chuckanut Drive.

Their 20 employees range in age from their teens to late 70s. When asked about their open-door policy to hiring people of all ages, Suzanne tells the story of a Bellevue businessman who had retired and relocated to the Skagit Valley, but soon decided retirement wasn’t all it’s cracked up to be. He applied for a job at Samish Bay Cheese. That was six years ago. He’s still there, at 70-plus, fulfilling wholesale orders after several years of managing the farmers markets.

Roger and Suzanne have spent their lives immersed in the organic food movement, which is now a nearly $50 billionindustry in the United States. Samish Bay is best known for its distinctive Ladysmith cheese,which has been described as “a cross between queso fresco and ricotta salata.” They see their legacy as not just supplying the region with good, nutritious cheeses, but “building healthy soil,” explains Roger. That’s their way of not only “supporting other farms” in their beloved Skagit Valley, but also doing their small part in the face of the climate change crisis.

Suzanne has a Samish Bay Cheese cookbook in the works, which she hopes to publish this fall. She also holds a degree in early childhood education, which has inspired another dream: She’d like to establish an onsite garden for children who visit the farm, giving them the chance to get their hands in the soil. Roger says “kids love it” when he introduces them to the farm’s calves, lambs, and piglets.

As for the far future, their four adult children—an astrophysicist, an artist/curator, a software professional, and an electrician—love visiting the farm, but they don’t aspire to take it over. For now, that’s fine with Roger and Suzanne. Their third act is all about making the most of the business they have spent 20 years lovingly building into what it is today.

Samish Bay Cheese is open 363 days a year. Hours very according to season, so check samishbay.com or call 360-766-6707 for an update before you go.  Once you’re there, look for a copy of the Bow-Edison Food Trail map.

Ann Hedreenis a writer, filmmaker, and the author of Her Beautiful Brain, winner of a 2016 Next Generation Indie book award. Ann and her husband, Rustin Thompson, own White Noise Productionsand have made more than 150 short films and five feature documentaries together, including Quick Brown Fox: an Alzheimer’s Story. Their latest film, set in Peru and inspired by Ann’s great-uncle, is Zona Intangible.