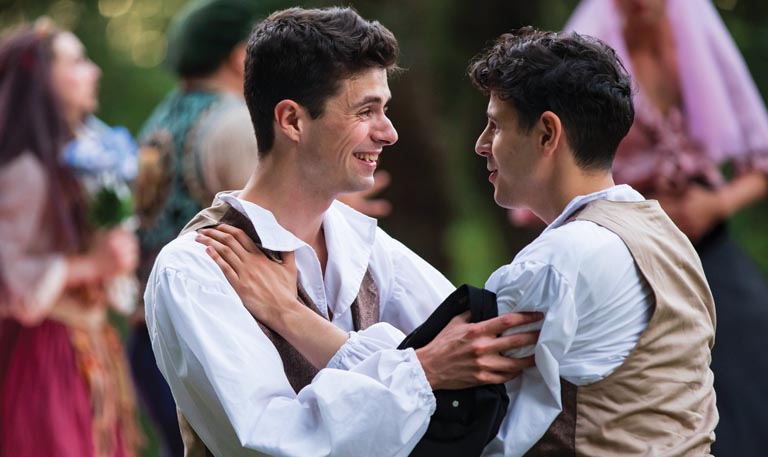 Curtain up! Light the lights! Blow a kiss, take a bow! For Seattle area theaters, is everything coming up roses?

The actors are eager and ready. So are the directors, designers, technicians, and the many others who make live theater happen.

They are raring to go because since spring of 2020, Seattle performance venues have been on an extended, unexpected, and unprecedented intermission. Collectively, they’ve had to cancel scores of live shows, lay off hundreds of staffers, and close their doors to the public.

And what of their audience? Since the COVID-19 pandemic kept us from mingling together in person for well over a year, it has turned even many of the most ardent theater-devotees into homebodies. We’ve been getting our drama and comedy fixes in our living rooms, from television and other streaming devices, rather than in-person shows.

Yet, at last, it looks as though live entertainment—and theater is one of the liveliest—is on a comeback track. Broadway is getting starstruck again. And in our area, the drama engine restarted this summer with free Shakespeare performances in the park by local troupes including Seattle Shakespeare Company and GreenStage.

It won’t be easy to rev up fulltime production and woo back ticket-buyers en masse. But local stage insiders say they are determined, committed, even hopeful that theater in and around Seattle—long considered one of the most prolific show towns in the country—can survive and thrive again.

“I do believe one thing we all really missed in this time between the crazy political season, the COVID lockdown, and losing so many people to this terrible disease was our ability to gather together and share experiences through arts and culture,” says Bernadine Griffin, the general manager of the 5th Avenue Theatre, one of Seattle’s largest and most popular venues. The 5th Avenue is looking ahead to early 2022 to start its next season but hopes to offer at least some events during the coming holiday season.

“I’m just as grateful for my Netflix account this year as anyone,” says Braden Abraham, artistic director of the Seattle Rep, the city’s longest-running major playhouse. “It goes to show we need art in our lives to get us through the toughest times. But this [physical]isolation has also taught us that nothing quite matches the experience of being in the theater together. It will be the plays and the thrill of live performance that will bring people back.”

As theaters carefully plot their moves for the coming year, keeping in mind the health and safety concerns of their workers and patrons, they do so carefully and slowly, after a statewide shutdown threatened their very existence.

In fact, it is a mark of how much our cultural life means to us in this area that the larger, multi-million-dollar arts institutions, including Seattle Opera, the Pacific Northwest Ballet, and Seattle Symphony have managed to soldier on—and remain, to a degree, artistically vital, even with their marquees darkened.

“Every single theater in this region with paid staff had to lay off a significant percentage of their workers,” says Kathy Hsieh, who surveys the scene from two different perspectives. She is the cultural partnerships & grants manager for the city of Seattle’s Office of Arts & Culture, as well as a professional actor, director, and playwright. She is also the co-executive producer for SIS Productions, a local Asian American theatre company.

The 5th Avenue, which presents musicals old and new in its historic 2,100-seat downtown theater, laid off 70 percent of its staff in March 2020. Notes Griffin, “Everybody who stayed on did so at reduced pay and with reduced hours.”

Griffin estimates that usually the 5th Avenue’s homegrown and imported Broadway musicals log roughly 250,000 admissions in a regular season. When the pandemic struck, the company was well into their 2020-2021 season subscription drive.

“We had to stop subscriptions and reach out to all of our ticket-holders for upcoming events. We asked if they’d consider donating their tickets back to the theater, or turning them into a gift certificate for future shows,” she says. “But we knew people had their own money worries too, so we also offered refunds.”

Griffin was gratified that only 20 percent of ticket-holders requested their money back, which gave the 5th Avenue a bit of extra financial breathing room. And to her surprise, the company’s generous financial donors continued to support the institution at regular levels.

applied for and received money from the Paycheck Protection Program. This federal relief fund administered by the Small Business Administration was designed to help businesses keep workers on the payroll and cover some additional overhead expenses.

There was also assistance from state, county, and city government programs. “We were the first city nationwide to host a webinar stating that we were giving reallocated funds to arts and cultural organizations,” says Hsieh. “We also worked with theaters and landlords to defer rent payments on arts facilities.”

All that support, however, did not make up for the loss of ticket revenue. Nor did it keep  Seattle’s large pool of professional actors and other workers from relying mainly on unemployment benefits. But theaters got creative about using the Internet to entertain and inform their patrons, occasionally employ at least some of their artists and, perhaps, draw in some future patrons.

“We jumped on this cool idea of developing new musicals through radio plays,” reports Griffin. “We’ve been able to take new work to the next level that way, and I think we’ll bring that program forward after we reopen.”

Seattle’s high-profile ACT Theatre’s digital offerings has included a play-in-process about the history of Black theater in Seattle, and a performance of noted solo theater artist Dael Orlandersmith’s Until the Flood, a stirring piece exploring the social uprising in Ferguson, Missouri, following the shooting of teenager Michael Brown. (It is available on demand at allarts.org through 2022.)

Theaters also pitched in by allowing their empty lobbies to be used for blood and food collection drives. They kept young people involved in ongoing programs like Issaquah-based Village Theatre’s KIDSTAGE. And many participated in regular meetings of the Seattle Theatre Leaders, which brainstorms how to improve racial, ethnic, and cultural equity in  their institutions, increase accessibility in the theater world, and share resources between larger and smaller companies. “There’s been so much love and support and hope for each other that it’s been our saving grace,” Hsieh says.

Though autumn marks the traditional opening of the Seattle theater season, when most of the several dozen theater companies in our region are looking to launch a full slate of live productions at (God willing) full audience capacity in early 2022. That’s when 5th Avenue plans to stage the new musical Afterwords, followed by a touring run of the hit Broadway musical Come from Away, about how a small town in Canada embraced stranded airline passengers after the 9/11 terrorist attacks. Seattle Theatre Group’s Broadway at the Paramount series has had to reshuffle its roster of national tours, but will present a tour of the musical Jesus Christ Superstar.  And the group has announced the return of Lin Manuel Miranda’s blockbuster history musical, Hamilton in mid-2022.

No one can predict precisely what the immediate future holds, as all public institutions respond to shifting health regulations vis-a-vis the pandemic. So what can theater-lovers do to help this dynamic cultural resource rekindle its magic?

Look for updates on theater company and local arts websites to learn the latest news of what is playing and when. Consider making a tax-deductible donation to a nonprofit troupe. Take the leap and buy a subscription or show tickets to one of your favorite theaters, as a demonstration of support and a vote of confidence.

What else? “Other than giving money, I think helping theater in our area is even more about coming, participating, sharing your experiences with friends and loved ones,” says Bradshaw. “That’s the thing that’s been true forever and has accelerated in our social media world. There needs to be that energy and enthusiasm now more than ever.”

For Abraham, it is about continuing and constantly renewing a cultural legacy that has enhanced our region for decades. “Seattle Rep turns 60 in two years,” he notes. “My hope is that the Rep is an essential part of the arts and cultural landscape of this city for another 60 years, and the theater truly represents the cultural depth and breadth of our city in all its richness and complexity.”

Misha Berson writes about the arts for crosscut.com and many other media outlets, teaches for the UW Osher program, and is the author of four books, including Something’s Coming, Something Good: West Side Story and the American Imagination (Applause/Hal Leonard).