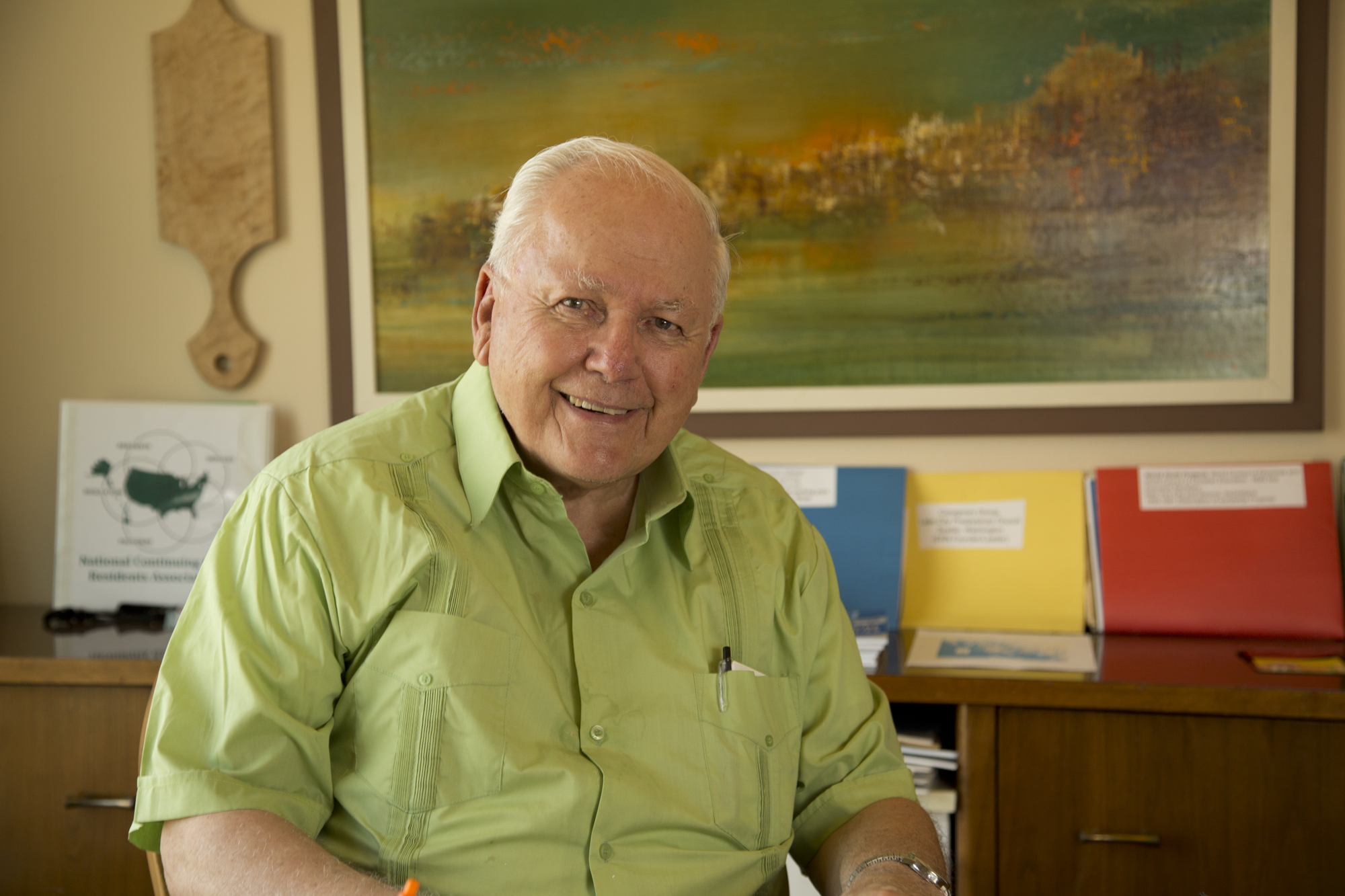 At 85, the Rev. Robert “Bob” Nicholson doesn’t mind the word “older.” But he’s not so crazy about “retired.”

“I have an advanced degree in getting older,” he declares, as we enter his sunny corner apartment at Aljoya Thornton Place, which is full of books and papers and neatly labeled files for his many current projects. The walls are happily crowded with watercolors by his late wife, Betty; shelves and tables are filled with mementos and photos that hint at the full life they led together: Bob as a Presbyterian minister and Betty as a teacher, activist, artist, ordained church elder, and pioneering gerontologist.

It was Betty who embraced the notion of a senior living community. Perhaps she understood, even better than Bob, that it would be the perfect place for their third acts; that it would give them the freedom to fill their lives with everything they really cared about. Bob dove right in, serving as a board member and eventually as president of the National Continuing Care Retirement Association. Because diving in is what Bob Nicholson does: rolling up his sleeves and working to make the world a better place. He is firm in his belief that older adults must be actively involved in the evolution and development of their own communities. “If it’s about us, include us,” he says.

Betty died two years ago. She and Bob were married for 57 years, and Bob pondered how best to publicly remember her legacy. He decided to commission, in her honor, a pocket pamphlet about the Thornton Creek Water Quality Channel, the 2.7 acre natural area just outside the Aljoya building that acts, in the pamphlet’s words, as a “human-designed and engineered substitute” for the real creek and wetlands that disappeared deep underground when Northgate Mall construction began in 1948. The pamphlet explains how the channel filters pollutants that could hurt salmon fingerlings, and lists the native plants that now grow there and the dozens of birds that visit.

Bob tries hard to follow the advice that Betty used in her own workshops for people who had suffered a recent loss. Accept grief, she would say. Talk about it. Don’t rush it. Suggest ways friends can help. Stay engaged in meaningful activity and relationships. The Thornton Creek pamphlet project gave him a chance to talk often about Betty’s love of nature and her affection for this newly reestablished pocket of it. And it resulted in a useful tool for generations to come: one that captures the attitude of “expectancy for life” that Bob and Betty have always embodied.

Shortly after Bob was ordained to the ministry in 1957 at age 24, he was named the first full-time secretary for World Youth Projects with the World Council of Churches, based in New York and Geneva. He went on to serve in several churches including Lake City Presbyterian Church in Seattle for 14 years, where he started a support group for caregivers. In Oakland, California, he founded the area’s first senior center and a study skills/homework help program that served 650 young adults; in Lubbock, Texas, he persuaded medical professionals to volunteer in the area’s only medical clinic for the working poor. He has also served in countless elected positions for the national Presbyterian church.

Since his official “retirement” in 1995, Bob has stepped in as an interim minister in Juneau, Alaska, and, just this spring, in Ketchikan, where he had the honor of blessing the fishing fleet in an annual ceremony featuring bagpipers, drums, and a United States Coast Guard color guard. He has also stayed active as a United States Soccer Federation referee; as an onboard interpreter on Amtrak’s Empire Builder run from Seattle to Glacier Park, Montana; and as a member of Amtrak’s national Customer Advisory Committee.

He also serves frequently as a guest minister at Presbyterian churches in the Puget Sound area. One recent Sunday, when Bob filled in for the vacationing minister at Rainier Beach Presbyterian Church, he came bearing gifts. One was a “Presbyterian mezuzah” bearing traditional Hebrew text and the intertwined vines of the Celtic cross, symbolic of the “interconnectedness of life.” He also filled the offering baskets with his own stapled booklets of meditations on how to make your prayer life more positive, urging his audience to take this gift from him before they gave gifts from their own pockets.

The message of his sermon was simple: “Discover that the power is in the yes, and you will find a life blessed beyond belief.” The Rev. Bob Nicholson can testify to the truth of that statement, because he has lived it all his life. And by the time you read this, I am confident he will have said yes to something absolutely new.

Ann Hedreen is a writer, filmmaker, and the author of Her Beautiful Brain, winner of a 2016 Next Generation Indie book award. Ann and her husband, Rustin Thompson, own White Noise Productions and have made more than 150 short films and five feature documentaries together, including Quick Brown Fox: an Alzheimer’s Story. Their newest film, set in Peru and inspired by Ann’s great-uncle, is Zona Intangible.