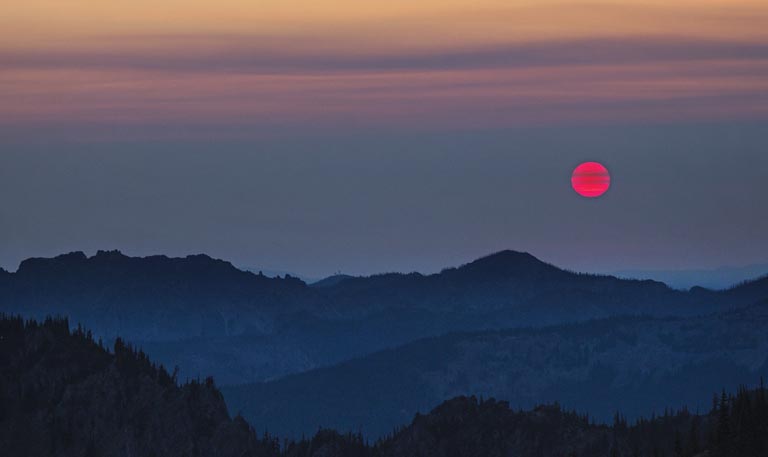 September 11, 2020: We were pressed not to go outside. Fans and filters stirred the gritty air, rebuffed endlessly by closed doors and windows, an anomaly for our formerly normal, beautiful, blue, September skies. Close the doors and windows? Obtain yet another kind of mask. “We are a little out of our minds,” my wife observed dryly. It was the anniversary of 9/11, the seventh month of the pandemic, and an AQI—that’s the air quality—reading of 197, inching toward red. A purple plume from Portland, Ore., the cumulative murk from raging wildfires, was shown to drift our way. We were packed for our vacation, now delayed.

In September, dread was thick in the air as a chaotic election loomed, COVID-19 raged on, and climate change had been recast as a crisis. It was all norm-defying. Pondering when I had felt like this before, I recalled the 1980s with its buffet of devastations. President Reagan seemed about to launch the nuclear Armageddon he was obsessed with and that wouldn’t do. So with a group of women, randomly formed, I organized and mapped, and raised some money, and started walking across the country for peace. We walked along the tracks of the White Train that carried the nuclear warheads that armed the Trident submarines stationed at the Bangor submarine base on Hood Canal that were, in turn, dispatched from the Pantex Plant in Amarillo, Texas. We would hold vigils in small towns and cities along the tracks, with lit candles and brandished signs. We would talk about the train, show a film, run a workshop. We were passionate, rigid with conviction.

I am remembering the night in Matfield Green, Kansas, a town, then, of 71; a town reduced, in 2010, to 47. We had shown up, typically red-faced and exhausted, having hauled ourselves and two carts our requisite 20 miles. All I knew was we had a couple of hosts offering beds for the night, and two sponsors, the former recruited by the latter, all unknown. There would be a potluck dinner, followed by a film screening and talk. The film was a documentary about the Hibakusha, survivors of the bombs dropped on Hiroshima and Nagasaki. Archival footage showed the smashed, scorched cities, the agonies of radiation poisoning. The footage was graphic, the suffering unadorned. We didn’t know that in our audience that night were several World War II veterans, tasked with addressing the Hiroshima and Nagasaki aftermath. We had not done our homework.

Halfway through the film, jeers erupted. Boots shuffled, scrambling for the doors. We, too, found ourselves angry and offended, unable to comprehend the mood’s swift turn. But we were also incurious. Why did we remain so? It was our undoing, this lack of curiosity not only for other peoples’ lives but also for ourselves. Why did we not question the role of our emotions as they drove trajectory and outcome? We had failed to stop the White Train of and in ourselves.

It got very out of hand. One of us cowered by a tractor wheel, one implored for calm. Phyllis, our host for the night, spewed scripture as her husband, livid, had cinched his lips into a thin, white line. They, this farm couple, would fulfill their pledge of hospitality after this botched and wounding evening.

In addition to the ill-received documentary about the Hibakusha, we had intended to offer a workshop. It was called “Despair and Empowerment,” work developed in the late 1970s by Joanna Macy, Buddhist scholar, environmental activist, and author. Hers was a uniquely spiritual and emotional approach and it drew on the power of connecting people to their deep caring. She had been observing a strange malaise in reaction to the threat of nuclear war. “What,” she asked, “is under the denial?” She recognized its deadening weight, its destruction of the capacity to live fully. Allowing the underlying despair could open one to tenderness. The shift from personal identification with one’s pain to compassion for the world’s suffering triggered a feeling of empowerment.

Over time, the work evolved to address climate change and socio-economic collapse.

We never made it to the workshop portion of the evening that night in Matfield Green. If I could do it over, I’d tell the walkers to “do your homework.” Know the town and the people as best you can. Anticipate that initially all of us will meet in a quagmire of preconceptions and that the job is to listen. Always be grateful. Walk in the spirits of Gandhi, John Lewis, Martin Luther King. Keep to those high standards. But who had time for that?

If every step could be taken with care, with that quality of care, and just the tiniest, occasional oopsie of righteousness, well, wouldn’t heads turn?

“Of all the dangers we face from climate chaos to nuclear war,” Macy has opined, “none is so great as the deadening of our response.” That’s what I’m exploring here. We are a little out of our minds. Asked to hold steady in a buffeted world, the task is to not numb, to pry ourselves open to the love and the losses over and over again—to the birds dying in great numbers and vacations, canceled to wedding celebrations postponed indefinitely. Joy crumbles and faith is given a workout.

And yet, I’ll go about my day—a trip to Staples for printing paper and pens, then to Total Wine for you know what. In a burst of enthusiasm, I may take my new Bermuda madras shorts up to the tailor for hemming. I’ll walk the dog, happy that I have to. I’ll pick at a strand recalled from Samuel Beckett: “I can’t go on. I’ll go on.”

A practicing Buddhist for more than 30 years, Hollis Giammatteo has sought experiences that challenge her practice, from teaching writing to working with the elderly. She co-founded The Wilma Theater in Philadelphia and was a resident playwright for The Rhode Island Feminist Theatre. Giammatteo has published in a variety of magazines and her memoir, The Shelf Life of Ashes, was released in 2016 by She Writes Press.