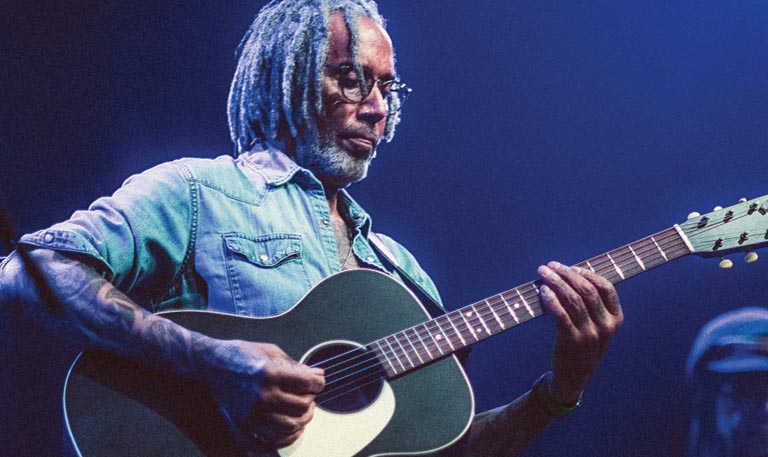 As a young man, he wrote hit songs for The Temptations and Elton John. At 60, he was a finalist on TV’s The X Factor. Now 70, he is collaborating with a longtime Saturday Night Live band leader. LeRoy Bell may not be as recognizable as fellow Seattle-area musicians Eddie Vedder, Dave Matthews, or Brandi Carlile. But for decades, he has blended passion and purpose into a successful life doing what he loves best.

The pandemic upended all our lives, and the disruption came at an especially bad time for Bell. He had just forged a new partnership with G.E. Smith, a noted session guitarist and SNL veteran who had spent his entire career looking for a vocalist as good as the singers he had backed over the years, including Bob Dylan, Daryl Hall, and David Bowie. “I wanted to have a singer like that in my band,” Smith told American Songwriter magazine last year. “LeRoy is that singer.”

The duo recorded an album, Stony Hill,  and were set to play the March 2020 South by Southwest music festival in Austin, followed by a tour. Then the pandemic abruptly silenced live music.

Like most musicians, Bell played some online shows during the forced hiatus, but that couldn’t take the place of performing in a venue before a live audience. When the pandemic finally started to recede and the red velvet curtain rose at Seattle’s Triple Door last June, LeRoy Bell and His Only Friends were the first musicians to take the club’s stage in 15 months.

“It’s like the first day back at school,” Bell joked to the appreciative crowd, noting how they all felt some nervousness after so much time in isolation. Yet, it didn’t take long before Bell and his current lineup (longtime collaborator Terry Morgan on bass, former Heart drummer Ben Smith, and lead guitarist Jason Cameron) found their groove as the audience got up to dance and sing along.

The oldest of six children in a military family, Bell was born in Florida and grew up mostly in Germany. His dad, an Army sergeant who sold cars on the side, wanted Bell to become a dentist. “He was never 100 percent behind me trying to make a living playing music,” Bell recalls. But the young Bell had a champion in his uncle, Thom Bell, an architect of the Philadelphia soul scene of the 1960s and ’70s. “He got me started writing for a lot of people like the Spinners and the O’Jays and the Temptations,” remembers Bell. “I hung out with him in the studio, and I learned a lot from him.” Bell went on to record with his friend Casey James, and the duo reached #15 on the Billboard Hot 100 in 1979 with their song, “Livin’ It Up (Friday Night).”

With a back catalog of songs that likely numbers in the thousands by now, Bell will sometimes grab a guitar and start playing to conjure memories of how a certain song came to be. Songs like “Jaded” (“my eyes have seen too much”) speak to the despair that convinced Bell to stop watching television a few years ago, and last year’s “America”—a centerpiece of his album with Smith—is a soul-wrenching look at a nation betraying its promise. Yet even at his most critical, Bell infuses his work with hope. “One of the threads in my music is, ‘there’s a way out of this’ …that even though I might criticize what’s going on, I’m always hopeful that as the human race, we can get better,” he says.

Of course, love in all its manifestations is the way that we might reach that better place. Many people in the Puget Sound region probably first heard Bell via “Dream of Peace,” an anthemic song of fatherly love that he wrote for the 2005 Christmas in the Northwest compilation album released to benefit Seattle Children’s Hospital. And at the Triple Door show, Bell and the band gleefully served up “Everything About You,” an infectious song that proves that none of us is ever too old for a crush. (“I wish I knew the future, of how it’s going to be, so I could bump into you accidentally on the street,” he sang.)

Although Bell turned 70 in August, retirement is not on his radar. He’s playing some of the best music of his life with old friends and new ones, and he doesn’t take that for granted. Bell tells how, a few years ago, sitting in his hotel room after playing a blues festival, he was inspired to write a song that he often uncorks at the end of a show these days. “If I Should Die Tonight” is a response, decades later, to a father’s disbelief that his son could make it as a musician.

“Even if I don’t have that much money, as long as I am making music with my friends—if I die tonight, if I die on the stage—then that’s OK,” he says. “It’s all good because I’m doing what I love to do. I’d rather do that than work 9-to-5 doing something just to make money and not be enjoying life. …I feel very, very lucky that I chose this road, even though it wasn’t always easy.”

Bell recalls that he was “really kind of freaked out about turning 50” two decades ago. “We get so caught up in what society says is your age and what you should be doing at that age,” he says, adding that he has learned to cast those expectations aside. By coming back from a year on the sidelines to play every night like it could be his last, LeRoy Bell sounds like he is just getting started.

A frequent contributor to 3rd Act, Julie Fanselow used to play bass and sing in an Ohio garage band, and she wrote this article under the influence of a blossoming summer crush. She lives in Seattle.