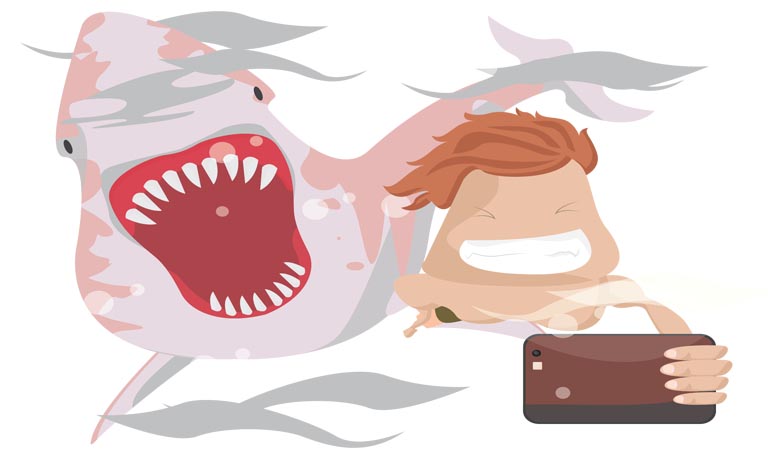 The fact that selfies kill more people than shark attacks is one of those modern-day ironies that has folks shaking their heads and snickering at the absurdity.

What’s up with irony, anyway? Turn to Merriam-Webster and irony can be Socratic, sardonic, dramatic, or tragic—an elusive jumble. It’s a bit ironic that the dictionary starts out with a mishmash about irony well before this definition: “incongruity between the actual result of a sequence of events and the normal or expected result.”

As dark as it sometimes can be, irony is anchored on the happiness scale and surfaces most anywhere.

Still, an article last fall in Massachusetts General Hospital’s Mind, Mood and Memory newsletter suggests a smile doesn’t always mean you’re happy. British researchers discovered more people smile when they answer a question incorrectly than when they get it right. Incongruity, for sure.

Colette Hoption, a management professor at Seattle University’s Albers School of Business and Economics, says her research reveals that bosses who make fun of themselves are the most highly regarded. A smidge of irony there.

On the flipside, Lindie Liang and her academic colleagues at Wilfrid Laurier University in Canada studied workplace aggression. They found that a virtual voodoo doll serves as effective retaliation when workers receive abusive treatment from their bosses.

What about food? Fat-free half-and-half is mystifying enough, but who would’ve guessed a tussle would erupt over this ironic question: Can almonds lactate? Otherwise, how can there be almond milk?

Who knew cremated ashes aren’t toxic? After a prankster teen in California folded some of her grandpa’s ashes into a batch of sugar cookies and shared them with classmates, investigators scratched their heads over whether incorporating human remains into food was a crime. Apparently not, but don’t get any morbid ideas.

There’s a campaign underway in South Carolina to remind people that flushable baby wipes and wet wipes aren’t flushable even though packages say they are.

Television is irony’s friend. A vintage episode of The Big Bang Theory suggested lead character Sheldon Cooper grew up “irony-impaired” because at age 8 he had a cat named Lucky that was run over on the road.

When comedian Ken Jeong appeared as a judge on TV’s The Gong Show a while back, he described a spoof magician contestant (one who intentionally didn’t do any magic) as “the god of irony.” Then Jeong gave him a poor score of two out of 10.

Former President Barack Obama, in a speech leading up to the November midterm elections, urged, “Don’t lose yourself in ironic detachment. Vote!”

Has irony turned into America’s escape from political madness? Years ago, a New York Times essay suggested that with the dawn of the Internet age, irony became a way for folks to shirk responsibility for their choices. That might explain Obama’s point about ironic detachment.

Living without irony is quite a challenge given how immersed we are in it. Imagine if all the absurdity, sarcasm, kitsch, weirdness, escapism, and hyperbole went bye-bye. In today’s topsy-turvy world fraught with contradictory emotions, it’s not easy to focus entirely on authenticity and what really matters.

Before this ironic quagmire gets too bleak or perplexing, Merriam-Webster has a little more to add, this time on ironizing. No, not the 1930s fad when women took ironized yeast tablets supposedly to plump up a bit for summer bikinis. Ironing boards aren’t part of the picture, either.

The verb ironize means “to use irony,” and dates way back to 1602, when humanity also coined words like squabbles and kettledrums. Shakespeare lived until 1616, so ironizing had to be part of human consciousness before then, even if it didn’t yet have a name.

Enough ironizing, but not before returning to my original point. The Journal of Family Medicine and Primary Care tallied selfie deaths around the globe at a whopping 259 between 2011 and 2017. And sharks? They kill an average of only six humans a year, according to the International Shark Attack File.

Annie Culver developed a knack for unearthing oddball characters and improbable events as a staff writer for various newspapers. In the early 1990s, she went to work for websites where she wrote sassy essays aimed at women. In recent years, she morphed into a writer for several universities in the Northwest. She retired in 2016, yet still enjoys freelancing.