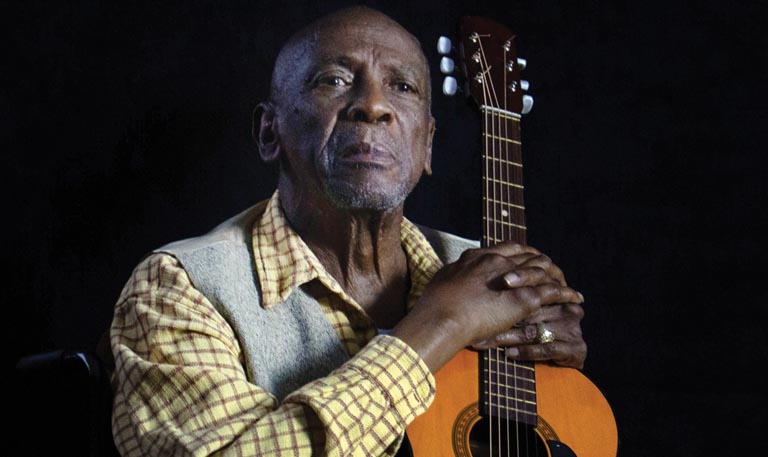 When we first meet the character of Luis Garcia in the 2020 film The Cuban, we see a dour, silent man isolated from others, locked in a seemingly impenetrable state of dementia. The new aide attending to him in a Canadian nursing home is warned that Mr. Garcia does not engage with other people. In fact, he’s openly hostile to them.

But young Mina, the idealistic pre-med student charged with feeding and shaving him won’t give up so easily on making real contact. And when she discovers that Mr. Garcia was a professional musician in his native Cuba, she soon finds ways to connect with his vibrant culture and unleash his vivid personality—even though Mina gets little support from her disapproving boss.

Though The Cuban occasionally slips into a rather formulaic us vs. them mode, the warm-hearted movie is greatly enriched by the actor so powerfully embodying Mr. Garcia’s transformation—Louis Gossett Jr., the Oscar award-winning Hollywood veteran. A hale and hearty 84, Gossett is practicing his craft with his customary skill and finesse after more than 60 years in a profession he still approaches with zest.

“I started out acting at 16,” said the affable Gossett, in a recent phone conversation from his home in Atlanta. “For me, this is not work. I’ve never worked a day in my life! It’s a joy for an artist to understand what a character is about, to visit that person.”

Gossett is probably the best known for his riveting turn as a hard-driving Army drill sergeant in An Officer and a Gentleman, the film that earned him the Academy Award in 1982. But his credits are extensive and wide-ranging, from roles in the original Broadway play and film A Raisin in the Sun opposite Sidney Poitier and the groundbreaking tele-series about American slavery, Roots to parts in Marvel action pictures and a notable 2019 turn as a mysterious man on a mission in the acclaimed HBO sci-fi series, Watchmen.

For his stellar work in The Cuban, the Brooklyn native, a proud father and grandfather, tapped his own life experience for some inspiration. “My great grandmother, who died at about age 117, was very important in my life,” he said. Though she was “very much present” in her later years, Gossett strongly believes funds for Alzheimer’s research and care “should be doubled, tripled. We need to get as close to our elders as possible, not as far away. We need their wisdom.”

In the movie, Mina uses recordings of Cuban jazz to spark Mr. Garcia’s positive memories. Gossett felt a personal connection there too. Growing up in a multiethnic community, he was receptive to an array of cultural influences. “The music of Joe Cuba, Tito Puente, Chito Rodriguez, Willie Bobo—that was our prom music,” he said. “We danced the cha-cha-cha, the merengue. It’s fantastic music and we loved it all. When I heard that music again for the film I went back to my high school days. It was a real organic remembrance.”

Gossett also enjoyed the intergenerational aspect of The Cuban and the chance to play opposite Ana Golja, the actress who as Mina forms a sweet bond with his character. “Ana is amazing,” he effused. “That’s a Judy Garland—she sings, dances, acts. She’s a triple threat, a dynamo.”

From his vantage point, Gossett sees age, race and other differences as false divisions in our society. To promote his credo of “peace and dignity for all,” he founded The Eracism Foundation. Its mission—“to provide training for youth and adults alike that enrich their lives by assisting them in setting the example for living a racially diverse and culturally inclusive life.”

“Age is a curse word these days,” Gossett lamented. “But everything that is good in us is mutual, what we donate to a big melting pot. I want to shake people and say, ‘Wake up! It’s not racial or political anymore. It’s our mutual salvation.’”

Though he has long been a proponent of civil rights, Gossett said, “I don’t like that word minority. Everybody’s an American. The promises of the Constitution are written in blood by our forefathers. Black Lives Matter is extremely important but it’s only step one. We can’t assume the language of the oppressor. We have to live in the solution now and behave toward our neighbors in the way we want the world to be.”

Meanwhile, Gossett is ready to embrace more acting challenges and looks forward to his next “visit” with a compelling character. Asked what kind of roles he’d like to add to his esteemed repertoire, he mentions two: legendary civil rights leaders “who are leaving us now, like Rep. John Lewis.”